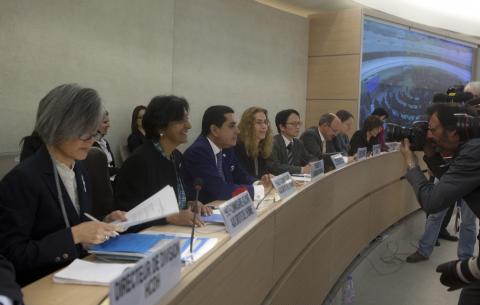 A new report highlights the international community’s perspective on the United States’ human rights record. This article was published in the March-April 2021 issue of NewsNotes.

In Geneva in mid-March, the UN Human Rights Council (HRC) will meet to adopt the final report on the third Universal Periodic Review (UPR) of the United States’ human rights record. The report offers insight into how the global community views the United States’ commitment to human rights, with member states from around the world recommending that the United States further engage in multilateral treaties and institutions, and better address key issues at home, including systemic racism, prison conditions, and gun violence.

The review system, begun by the HRC in 2006, is described by the U.S. Mission to the UN as “a process through which all UN Member States are provided the opportunity to review the human rights records of all other Member States, and themselves. Individual countries are scheduled for review every four and a half years.” This is the United States’ third review.

While it was the Trump administration which participated in the review process for the report, it will fall to the Biden administration to provide a response to the draft report before it is adopted in March, and to decide how to address the 347 recommendations in the report made by UN national delegations.

Approximately 100 of the recommendations are aimed at greater U.S. engagement in international conventions and institutions. Dozens of countries urge the United States to ratify UN human rights treaties. While the United States was a leader in writing and passing the original Universal Declaration of Human Rights in 1948, it has since ratified only three of the nine “core conventions” codifying the declaration, and just two of the “optional protocols” to those conventions. Perhaps most notably, the United States is the only country in the world that has not ratified the Convention on the Rights of the Child.

Various countries also recommend that the United States re-join the Paris Climate Agreement, join the International Criminal Court (ICC) and drop sanctions against it, and re-engage with the Human Rights Council itself. The Biden administration has already moved to rejoin the Paris Agreement. The United States has not indicated a willingness to join the ICC, but President Biden has asked for a review of sanctions imposed by the Trump administration on Court officials, and indicated a willingness to cooperate with the Court in “exceptional cases.”

The bulk of the recommendations in the new report focus on human rights abuses carried out by the United States. Various countries demand closure of the prison at Guantanamo Bay – something President Biden has promised, but which the Obama administration also promised and failed to deliver. Dozens of recommendations focus on domestic systemic and institutional racism. Several nations express concern over sexual and gender discrimination. Over thirty countries urge the United States to halt or abolish the death penalty – a goal for which President Biden has expressed support.

Many countries also urge measures to reduce gun violence, and to reduce violence and increase accountability in law enforcement. The use of solitary confinement in U.S. prisons and the sentencing of minors to life in prison without parole are also named as concerns. Many countries note the role racism plays in all aspects of the U.S. criminal justice system. Gender inequality, especially in healthcare and the workplace, is a widely shared concern. Many recommendations address discrimination, violence, detention, and mistreatment of migrants, especially family separation and child detention. A number of recommendations urge increased respect for the rights of LGBTQI+ people, Indigenous communities, and peaceful protesters.

The Universal Periodic Review report sends a clear message to the United States and the Biden Administration: the world is watching.