UN: Family farming in the future 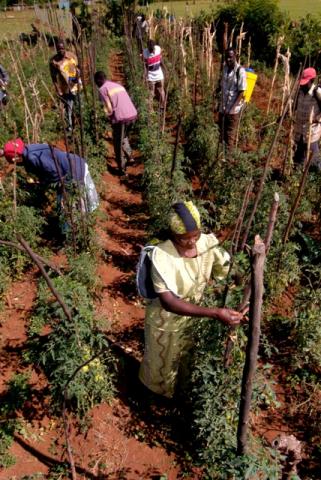 The following article by Dave Kane appeared in the March-April 2014 NewsNotes.

The United Nations has declared 2014 to be a year to focus on the importance of family farming. Much of the discussion about the future of farming has focused almost exclusively on the question of how much food is produced, with an emphasis on projected increases in population that will require much more food. The UN hopes that this year’s focus on smallholder farmers will show how agriculture is critical not only for producing food (smallholders already produce 70 percent of the world’s food), but also for eradicating hunger and poverty, providing livelihoods, protecting the environment and developing rural areas.

An oft-repeated statistic in the food-agriculture debate is that since the human population is estimated to reach nine billion people by 2050, we must double food production in order to feed everyone. Many argue that the only way to guarantee food for all is through more extensive use of fertilizers, pesticides, genetically modified organisms and other fossil fuel dependent solutions.

But those who believe that we need to double food production ignore some key factors that could change: First, they assume that we will continue to waste 30 to 40 percent of the food produced around the world as we do today. By confronting this problem, which is not a technically difficult issue, we would have more food available with the same amount of production.

They also assume that as people gain income, they will continue to increase their meat consumption. Meat is incredibly inefficient way to produce food calories. More than one-third of the world’s grains are fed to livestock on factory farms. The UN Environment Program estimates that "the calories we lose from feeding cereals to livestock instead of directly to people totals an equivalent that could feed 3.5 billion people." (emphasis in original) Through education campaigns, we can reduce the amount of meat consumed.

Finally, the idea that only industrial agriculture is capable of producing enough food ignores studies that show that smallholder, sustainably produced food can be as, or even more, productive than industrialized agriculture. (See links at U.S. Food Sovereignty Alliance and Food Myths.org.) Since industrial agriculture relies on a number of inputs predicted to be scarcer in coming decades, such as phosphorous, petroleum, and natural gas, to think of this type of farming as a long-term solution is specious at best.

An important aim of the UN International Year of Family Farming is to move the debate beyond simply food production and recognize the other important aspects of agriculture within society.

According to the Food and Agriculture Organization (FAO), "[f]amily farming is the predominant form of agriculture both in developed and developing countries" with over 500 million family farms worldwide. Ironically, half of the world’s hungry are smallholder farmers, trapped in a cycle of poverty, made worse by decades of price volatility, underinvestment in agriculture, and increasingly, by the effects of climate change. So any actions to improve the situation for smallholder farmers will by definition be effective in curbing poverty and reducing hunger.

Family farms are also important in achieving sustainable development, as they tend to have more diverse crops, preserve traditional food products, and spend their money locally, thus supporting agricultural and non-agricultural jobs in the region.

Industrial farms tend to plant vast fields of one crop only – known as monocropping – with heavy use of chemical fertilizers and herbicides, while producing few jobs and extracting money from local economies into the coffers of distant corporations.

During the International Year of the Family Farm, the UN asks everyone interested to help spread the word about the importance of these farmers and will work with governments to help improve their living and working conditions. As the campaign says, "Facilitating access to land, water and other natural resources and implementing specific policies for family farmers (credit, technical assistance, insurance, market access, public purchases, appropriate technologies) are key components for increasing agricultural productivity, eradicating poverty and achieving world food security."