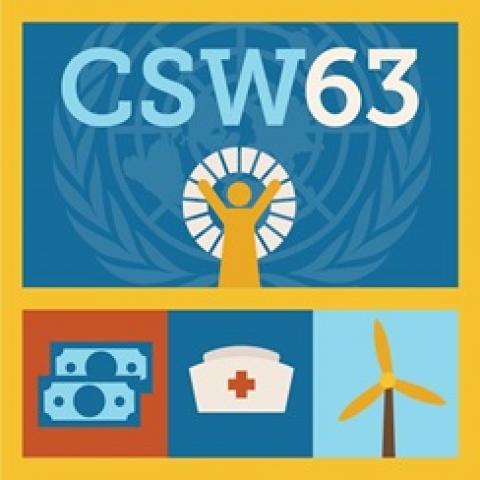 Maryknoll Sister Marvie Misolas reports on the 63rd UN conference on women. This article was published in the May-June 2019 issue of NewsNotes.

The achievements of women were celebrated around the world on International Women’s Day on March 8 with this year’s theme, “Think equal, build smart, innovate for change.” The same theme was adopted for the 63rd UN Conference of the Commission for the Status of Women (CSW63), held in New York over the course of 11 days, starting on March 11.

Approximately 10,000 people from around the world came to the annual UN conference on women to share and learn ways to advance gender equality and the empowerment of women and girls, in the areas of social protection systems, access to public services and sustainable infrastructure.

One of the keynote speakers, Kiara Nirghin, a student from drought-stricken South Africa who famously won the 2016 Google Science Fair at age 16 for her use of orange peels and avocados to invent a super-absorbent material that retains water in the soil, spoke about the importance of supportive family and economic and educational opportunities in her career in science, technology, engineering and math (STEM). She urged governments to prioritize and step up STEM education for girls to break down barriers and close gaps in gender equality.

Education is a tool to end gender inequality and an example of sustainable infrastructure. Tragically, 60 million girls still lack access to education.

UN Women Executive Director Phumzile Mlambo Ngcuka spoke about the power and potential of women as innovators. “Women are not simply consumers of prescribed solutions—they also design solutions for the whole of society.” By intentionally including women in innovation, we ensure that solutions are appropriate.

On March 12, President of the General Assembly Maria Fernanda Espinosa hosted a high-level event on ‘Women in Power’ to identify barriers that hinder women’s political participation and leadership, and to share best practices that can accelerate women’s empowerment in this area. Espinosa shared some disturbing statistics: “90 percent of heads of state and government are men, as are 76 percent of members of parliament. The vast majority of countries have never been governed by a woman: this is the same in all regions of the world.”

If this trend continues, Espinosa said, it will take 107 years to reach parity. “But what makes the situation even more serious is that, only 4 years ago, in 2015, the projection was that this gap would be closed in 30 years. We are clearly facing a regression and this event today is the key to revert the situation.”

Women in power tend to promote economic stability, institutional strength and reform of laws. Women have a central role in solving conflicts and consolidating peace, Espinosa said. “In fact, when women participate in a peace negotiation, the possibilities for it to last more than fifteen years increases 35 percent,” she noted.

Women also have a vital role to play in social protection systems. According to International Labor Union’s Christine Behrendt, “there are still 4 billion people on the planet or 55 percent, who are not covered by any kind of social protection.” Conferencees discussed a variety of solutions, including universal basic income, microfinance, universal social pension.