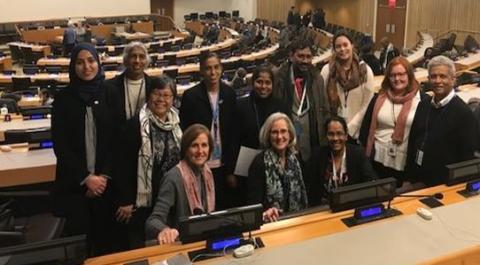 The following article was written by Maryknoll Office for Global Concerns staff member Sr. Marvie Misolas, MM., and published in the March-April 2018 issue of NewsNotes. Sr. Marvie serves as Maryknoll’s representative at the United Nations where the Maryknoll Sisters and the Maryknoll Fathers and Brothers have consultative status with the Economic and Social Council.

The fifty-sixth session of the Commission for Social Development took place at the United Nations in New York from January 29 to February 7. The Commission is the advisory body responsible for the social development pillar of global development. The priority theme for the 2018 policy cycle is “Strategies for eradicating poverty to achieve sustainable development for all.”

The countries and their official representatives reported on national plans, programs, and actions on the situation of four vulnerable social groups: people with disabilities, youth, older peoples, families. The goal of the commission was to draft action-oriented resolutions that set social policies and strategies to eradicate poverty and leave no one behind. Stakeholders agree that the implementation of the Sustainable Development Goals (SDGs) – a collection of 17 global goals set by the United Nations which include poverty, hunger, health, education, climate change, gender equality, water, sanitation, energy, environment and social justice – must include all members of society.

Country representatives reported on both successes and obstacles to eradicating poverty. Gaps and inequalities continue, exasperating uneven progress on the global and local levels. By discussing the complexities of implementing policies to eradicate poverty, the commission plays a crucial role in identifying targeted strategies to attain the SDGs.

“Eradication of poverty in all its forms and dimensions, including extreme poverty, remains the greatest global challenge and an indispensable requirement for sustainable development, particularly in Africa and in the least developed countries, small island developing States, landlocked developing countries and in middle income countries,” said Ghada Waly, Minister for Social Solidarity of Egypt, speaking on behalf of the “Group of 77” developing countries and China, summing up a common view.

Vietnam’s delegate, representing the group of ASEAN nations, cited the region’s robust focus on innovation, inclusivity, and international cooperation as the reasons the ASEAN nations are on track to fulfill the SDGs, also known as the 2030 Agenda for Sustainable Development, or 2030 Agenda. She said that the number of people living in extreme poverty in the region decreased from 138 million in 2000 to 44 million in 2015.

The representative of Equatorial Guinea, speaking on behalf of the African Group, said that 390 million Africans continue to live in extreme poverty, despite multiple poverty eradication commitments and pledges. Progress has been slow due to climate change impacts, economic slowdowns, war, and civil unrest. International support and partnerships are needed to boost ongoing efforts, with stepped-up investments from the private sector, civil society, and the UN.

Simultaneously, hundreds of youth representatives from around the world gathered for the Youth Forum to give voice and participation to youth. Luis Alvarado Martinez, youth representative of Spain and President of the European Union Youth Forum, said strategies for eradicating poverty should focus on equal access to work, strong social protections, and political inclusion. Although youth lack power, Martinez said, they must be active participants in shaping policies that affect their future.

Liu Zhenmin, the Under-Secretary General for Economic and Social Affairs, stressed the need to exert more effort to improve people’s lives. He cited that although the world is enjoying robust economic growth which has lifted more than a billion people out of poverty over the past two decades, many of these people live barely above the absolute poverty line and are at risk of falling back into extreme poverty if impacted by disaster, illness, loss of work, or a lack of social protection.

County representatives reported on social protection programs and policies that have been implemented in varying degrees of coverage. Gender bias and unequal wealth redistribution continue to be a challenge. Various countries commented on the uneven distribution of progress on the global level. This is a reality on the local level as well, with development gaps between urban and rural areas. The fact remains that there are still parts of the world cut off from basic services.

The challenge continues to be the creation of a development model that includes everyone, where everyone enjoys a healthy quality of life and sustainable economic status, and where the rights of nature are protected. To this end, the commission adopted resolutions encouraging African development and youth empowerment. This is a global response to address the needs of nations lagging in the implementation of the 2030 Agenda.