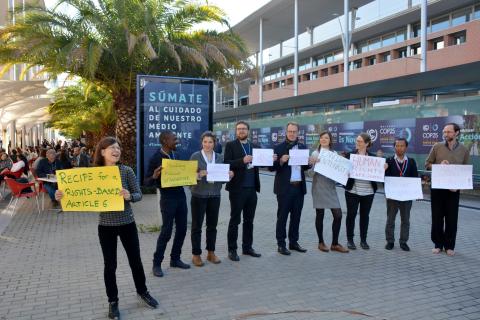 The UN climate conference in Madrid December 2-13 failed to address major agenda items. Chloe Noel of the Maryknoll Office for Global Concerns and Fr. John Brinkman, M.M., were present at the conference in Madrid. The following article was published in the January-February 2020 issue of NewsNotes.

The UN COP25 climate conference in Madrid fizzled out with little progress to show, despite a year of youth-driven climate mobilizations and extensive planning proceeding it. The two weeks of talks were punctuated with large civil society protests within and outside the UN conference center in favor of bold climate action, as well as attempts by several countries to undermine progress on the landmark 2015 Paris climate agreement, signed by 197 countries.

The UN climate Secretariat hoped to complete the implementation rules for the Paris agreement and to secure more ambitious commitments from countries for 2020. The goal is to limit the global average temperature rise to 1.5 or, at maximum, 2 degrees Celsius above pre-industrial levels in order to avert the worst effects of climate change. Yet currently, according the Intergovernmental Panel on Climate Change, the world is on a trajectory to rise 3.7 degrees by 2100.

The top agenda items at this year’s conference focused on finance. Negotiators continued difficult conversations on rules for carbon trading markets meant to assist countries in reducing carbon emissions and for financing a global response to irreparable loss and damage of natural areas due to climate change. Underpinning these conversations was the need to protect human rights and nature. On these major agenda items, COP25 was an utter failure.

Developing rules for the carbon markets is the last big obstacle to completing the implementation rules for the Paris agreement. A carbon market system creates a market for carbon “units” or credits that governments and the private sector can buy and sell to stay within allotted carbon emissions targets.

MOGC shares the concerns of Pope Francis regarding carbon markets, as articulated in both Laudato Si’ and the recommendations from the Synod on the Amazon. Carbon markets can be abused by wealthy governments and private interests at the expense of impoverished nations that are most vulnerable to climate change. Emissions reductions from these projects can be difficult to measure as well.

Ultimately, the governments failed to find consensus on a carbon market system and decided to delay the negotiations until next year. This is a good decision, as it is better to deliberate further rather than opt for a flawed deal.

Another central issue was the inclusion of human rights protections in the Paris agreement. Human rights advocates argue that issues such as poverty, labor concerns and gender equity are often overlooked in environmental accords, leaving many communities vulnerable as governments make decisions about environmental projects and responses to climate-related disasters. Chloe Noel of the Maryknoll Office for Global Concerns worked closely with CIDSE, a network of Catholic social justice organizations of which MOGC is a member, to advocate in Madrid for human rights language to be included in the agreement. However, by the end of COP25, human rights protections remained largely absent.

Governments and other participants also highlighted the importance of nature-based solutions to reduce emissions. Father John Brinkman, M.M., focused particularly on this issue while in Madrid. Nature-based solutions include conservation and restoration of natural areas, but even these strategies need to ensure that they are not inadvertently harming the local environment and communities.

The greatest achievement at COP25 was the adoption of the Gender Action Plan (GAP). The GAP recognizes that women experience climate change differently than men due to historical and current gender inequities. This is more pronounced in developing countries and for indigenous peoples. The GAP text explicitly includes language about human rights.

Everyone hoped that COP25 would end with a recommendation for financing the non-economic and economic costs of irreparable loss and damage caused by climate change. Examples of loss and damage include the disappearance of island nations due to sea level rise and farmers’ inability to grow food after prolonged droughts. Island nations and some African countries are most vulnerable to irreparable loss and damage and have the least resources to respond. They believe that developed countries have a moral and historical responsibility to finance the response. President Trump has criticized this finance mechanism, calling it a scheme to redistribute wealth. Ultimately, no progress was made on this issue.

While COP25 was largely disappointing, eyes are already turned to COP26, scheduled for November 2020 in Scotland. The United States is on track to leave the Paris agreement on November 4, 2020, the day after U.S. elections. What will come in the year ahead? One thing is clear: the 197 signatories and all supporters of the Paris agreement have a lot of work to do.

Photo of a demonstration at COP25 in Madrid credit of CarbonWatch. Chloe Noel is on the left.