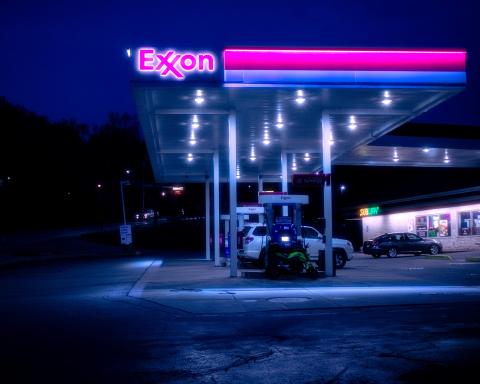 Climate advocates are finding success through shareholder advocacy and lawsuits to hold the fossil fuel industry accountable for its impact on the climate. This article was published in the July-August 2021 issue of NewsNotes.

In May, the Maryknoll Sisters joined a majority of shareholders of ExxonMobil in approving resolutions requiring disclosure of the oil giant’s lobbying activities and whether and how its lobbying aligns with goals of the Paris climate agreement. Shareholders also approved two alternative board candidates with backgrounds in energy transitions. At the same time, at Chevron’s annual meeting, shareholders passed a resolution calling on the U.S. oil company to make deeper cuts to its greenhouse gas emissions.

The Maryknoll Sisters and other faith-based and environmental organizations hold shares in these companies to practice what they call “shareholder advocacy,” to redirect the work and actions of companies toward justice and peace. These changes at ExxonMobil and Chevron are seen as a big win for climate activists.

“It was a wild day,” said Dominican Sr. Pat Daly to a reporter from the National Catholic Reporter. Sr. Daly is a longtime shareholder advocate, whose community, the Dominican Sisters of Caldwell, New Jersey, is a member of the Interfaith Center on Corporate Responsibility, as are the Maryknoll Sisters. “Corporate America has shifted,” she said.

Besides finding success through shareholder advocacy, climate advocates are using lawsuits to get fossil fuel companies and even governments to take climate action.  In the United States, in what has been called the climate “trial of the century,” 21 youth sued the U.S. government on the grounds that it was not taking sufficient action to provide them with a livable future.

Although the case was initially dismissed by the Ninth Circuit Court of Appeals, on May 13, U.S. District Judge Ann Aiken ordered attorneys on both sides to participate in a settlement conference to be held June 23. Concerned that the Biden administration could use this conference to create bold new policies, 17 Republican attorneys general from states with significant fossil fuel industries have asked to join the lawsuit to prevent a settlement.

Another notable climate case is a crowdfunded lawsuit filed in the European Court of Human Rights (ECHR) in September 2020 by four Portuguese children and two young adults. “This case is unique for several reasons,” explains political analyst Simantini Dey in India. “For starters, it is one of the few cases to be fast-tracked by the ECHR, and if the court rules in favor of the Portugal youths, 33 European countries will be legally bound to make deep emission cuts. Secondly, it is one of the few cases that address the cross-border impact of emissions of different countries and can therefore pave the way for international climate laws in the future.”

The UN Environment Program published a review of climate-related litigation around the world detailing at least 1550 climate change cases filed in 38 countries. The report points out that “[to] date, the majority of cases have been brought against governments, but the number of lawsuits against corporate entities – particularly [major emitting firms] – is on the rise."

The District Court in The Hague recently decided one such case against Royal Dutch Shell, the Netherlands’ largest oil company, determining that the corporation must reduce its global carbon emissions by 45 percent by the end of 2030 compared to 2019. Though it is unclear how this decision will be enforced, one of the lawyers that brought the case, Roger Cox, said “this ruling will change the world,” predicting that others will now be “ready to sue the oil companies in their own countries based on our example.”

A number of U.S. state, county, and municipal governments are also suing corporations, including Chevron, BP and Exxon Mobil, demanding compensation for expenses they are incurring in order to adapt to climate change. Their arguments are being aided by advances in climate science that make it easier to prove causation and culpability for emissions. Texas and Louisiana, both with large fossil fuel sectors, recently rescinded multi-billion-dollar subsidy programs for those industries.

Finally, the International Energy Agency (IEA) published a report in May drawing a roadmap for the global energy sector to reach net zero carbon emissions by 2050. The agency writes, “There is no need for investment in new fossil fuel supply in our net zero pathway. Beyond projects already committed as of 2021, there are no new oil and gas fields approved for development in our pathway, and no new coal mines or mine extensions are required.”

The IEA’s strong statement signals that unless fossil fuel corporations carry out significant reforms to reduce their carbon emissions, their days of economic viability are numbered. Changes are ahead for the fossil fuel industry, and the momentum is building through these new initiatives.