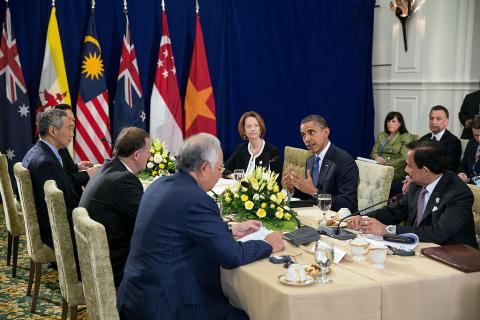 The following article appeared in the May-June 2013 issue of NewsNotes. Photo of President Obama at TPP meeting, November 2012, by Pete Souza [Public domain, via Wikimedia Commons]

The following article was written by Jennifer Svetlik, who worked with the Maryknoll Office for Global Concerns (MOGC) for several months this spring.

The Trans-Pacific Partnership (TPP) made headlines again in March as Japan was welcomed into the trade negotiations, despite protests from Japanese rice farmers concerned the treaty could undermine their livelihoods. Japan’s entry means that the agreement will cover one-third of global trade and 40 percent of the world’s economic output. It could be the largest regional free-trade agreement (FTA) in history, engaging 12 countries while allowing for others to quietly join in the future.

The TPP is unique not only for its size but also because the negotiating terms have been kept secret; governments have refused to release negotiating texts and opportunities for public input have been limited. Without their own chapter, rules related to agriculture, food systems and food safety are woven throughout the agreement and what is known of their content raises concern for members of society who seek greater control of their food systems. (See Trans-Pacific Partnership: Secret negotiations, NewsNotes, November-December 2012.)

Food sovereignty, a term originally coined by Via Campesina, is defined as "the right of peoples to define their own food and agriculture systems; to protect and regulate domestic agricultural production and trade… [and] restrict the dumping of products in their markets...Food sovereignty does not negate trade, but rather, it promotes the formulation of trade policies and practices that serve the rights of peoples to safe, healthy and ecologically sustainable production."

There is a global movement for food sovereignty; in the U.S., more people are shopping at their local farmers’ markets and in Brazil, farmers are growing food for local school lunch programs. At a national level, Ecuador, Bolivia, Mali, Senegal and Venezuela, among other countries, have explicitly included "food sovereignty" in their constitution or development plans. These policies offer preference to local markets over imports and local producers over corporations.

However, passing legislation and amendments is easier than confronting global trade laws, which these countries do not control. For this reason, the opportunity to advocate for food sovereignty within an FTA is of utmost significance.

The Social Organizations of the Americas recently published a statement, onto which the MOGC has signed, rejecting a trade agreement which would favor corporate rights over those of citizens and threaten food sovereignty.

The statement expresses concern that the TPP "threatens national food production and food security" through "the negotiation of agricultural subsidies, as well as the promotion of production for export monoculture that leads to land concentration, constitutes a threat to the traditional production of foods by medium and small farmers, affecting the production and culture of local communities and farmers." The statement demands greater involvement in the negotiations by all of society, especially those most affected by the TPP.

In Who’s at the Table? Demanding Answers on Agriculture in the Trans-Pacific Partnership, Karen Hansen-Kuhn notes that the agricultural sector in all of countries engaged in the TPP is dominated by a few corporations. Four companies control 83 percent of the U.S. meat industry, for example, and at the international level, three companies control 57 percent of the commercial seed market.

Hansen-Kuhn writes, "Trade policy should start from such goals as ending global hunger, enhancing rural and urban incomes and employment, and encouraging a transition to climate-friendly agriculture. The burden of proof should be on governments to demonstrate that the commitments being negotiated in the TPP will advance the human rights to food and development."

The TPP has great future significance. Vice President Biden has said that these trade deals are "shaping a new standard that then becomes the metric by which all future trade agreements are measured." If this is to be true, we must demand a trade system which promotes and protects food sovereignty.

A 17th round of talks is currently scheduled for May in Peru; negotiations are formally scheduled to conclude this year.