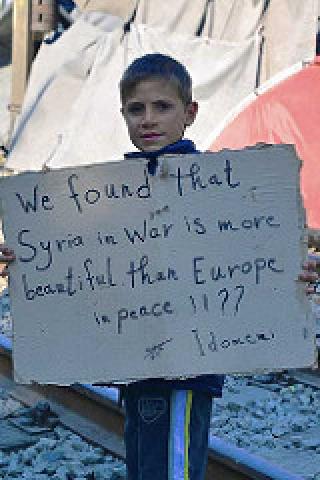 Child refugees in Greece desperate to reach other parts of Europe are forced to sell their bodies in order to pay smugglers to help them with their journeys, according to a recent report from Harvard University. The following article was published in the September-October 2017 issue of NewsNotes.

The full scope of the problem of human trafficking is hard to ascertain because of the illicit nature of the exploitation. Every year, thousands of men, women and children fall into the hands of traffickers. Almost every country in the world is affected by trafficking, whether as a country of origin, transit or destination for victims.

In 2016 the Alliance of Women for the Abolition of Prostitution drafted a UN Convention Against Sexual Exploitation, in response to two controversial UN reports which suggest that prostitution should either be legalized or decriminalized. Prominent sociologist and women’s liberation activist Kathleen Barry led the mobilization of the “Abolish Prostitution Now!” campaign and assisted in drafting the convention. While the UN acknowledges that there is sexual exploitation in all countries around the world, it does not go far enough to protect women and children.

The proposed convention recognizes the production, distribution, and consumption of pornography as sexual exploitation; and adopts legislation and other measures to prohibit sex tourism and advertised sex and penalizes those who organize tourism for the purpose of sexual exploitation.

One woman survivor of sex exploitation stated: “We survivors of prostitution and trafficking declare that prostitution is violence against women. Women and girls in prostitution do not wake up one day and “choose” to be prostitutes. It is chosen for us by poverty, past sexual abuse, the pimps who take advantage of our vulnerabilities, and the men who buy us for the sex of exploitation.” (from Manifesto, Joint CATW/ EWL Press Conference 2005)

As the global refugee crisis worsens, more people, including children, have fled their homelands because of war, poverty or famine. They are vulnerable to sexual exploitation along their already arduous journeys to find safety. Regardless of various international commitments to stop human trafficking and efforts to diminish it, studies show that the problem has increased as economic inequality has increased.

Dr. Vasileia Digidiki and Professor Jacqueline Bhabha describe this problem in their recent report entitled “Emergency within an emergency.” They stated that there is a “growing epidemic of sexual exploitation and abuse of migrant children in Greece.” Unaccompanied child refugees in the crowded, disorganized holding camps engage in prostitution in hopes of saving enough to pay traffickers to smuggle them to their destination country, often Germany, Britain, or Sweden. The sex they provide brings in so little cash, 15 Euros per encounter, that smugglers’ fees often remain out of reach. The report describes other forms of sexual exploitation and abuse of migrant children in Greece — sexual assault, rape, and blackmail by abusers who threaten to share explicit photographs of the children with their relatives back in their countries of origin. The report concludes that the detention of children in migrant camps in Greece needs to end immediately.

The problem of children trafficked into sexual slavery is rife in North America as well. Much of the sexual exploitation of minors has moved online. The organization U.S. Catholic Sisters Against Human Trafficking (http://www.sistersagainsttrafficking.org/) is part of a campaign to end the advertisement of the sale of minors and others for sexual exploitation in Backpage.com, the world’s largest classified advertisement site. More than a million sex ads are placed on Backpage.com per day, according to a 2016 report from the National Center on Sexual Exploitation. In addition to sexual exploitation, human trafficking, which is a 9.2 billion dollar industry in the U.S., can also involve forced labor and involuntary domestic servitude, with an estimated 300,000 child victims averaging age 13.

Faith in action: Ask your Senators to support the reauthorization of the Trafficking Victims Protection Act. Read a summary and a sample letter to send to your Senators at https://www.ecpatusa.org/tvpa

Photo: A child migrant at Idomeni, a makeshift refugee camp in Greece, 2016, by Mario Fornasari/Flickr.