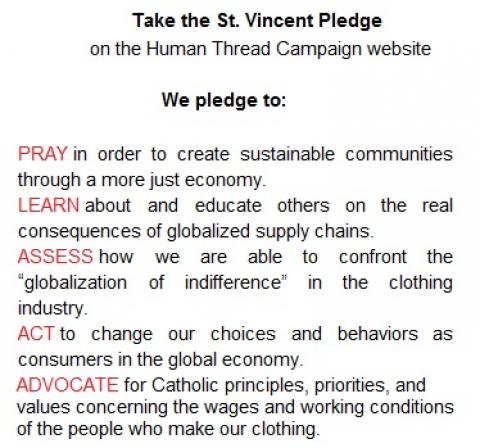 The Maryknoll Office for Global Concerns distributed more than 8,000 postcards for people to sign and mail to the CEOs of Macy’s and Kohl’s as part of the Human Thread Campaign during the final months of 2016. The following article was published in the January-February 2017 issue of NewsNotes.

“Purchasing is always a moral - and not simply economic – act,” Pope Francis has said.

Inspired by Catholic social teaching and motivated to action after the tragedy of the Rana Plaza garment factory collapse in Bangladesh, Franciscan Father Mike Crosby launched the Human Thread Campaign to pressure two large clothing department stores, Macy’s and Kohl’s, to ensure that workers who produce the clothing for sale in their stores are paid a fair wage.

The Human Thread Campaign website explains that the globalization of the production chain has had adverse effects on our ability to empathize with others (http://www.humanthreadcampaign.org/):

“Because the production of our clothing has moved from the textile factory nearby to places halfway around the world, this kind of marketplace blinds us from seeing the direct consequences of our consumer choices. As a result, and despite our good will, we have become unwitting perpetrators (or at least participants) of what Pope Francis has called the ‘globalization of indifference.’”

Unlike the Good Samaritan who saw the victim on the road, the physical and psychological distance between us and those who produce the goods that sustain us makes it difficult for us to understand our impact on their lives.

“We cannot imagine keeping a poorly paid tailor we know locked in a dimly lit basement workshop to make our clothes” the Human Thread Campaign says, yet we are complicit in the system that pays an average of $0.24 per hour to work in a garment factory in Bangladesh. Pope Francis calls this slave labor.

Over the course of a few months, the Human Thread Campaign distributed over 64,000 postcards around the country to individuals to send the message to the CEOs of Macy’s and Kohl’s that their customers want to purchase clothing made by people who earn a just wage. The Maryknoll Office for Global Concerns was able to distribute more than 8,000 postcards.

On November 30, known as “Black Friday” in the U.S. and promoted by businesses as a day to shop, Brother Anthony Zuba and several parishioners of Holy Cross-Saint John the Baptist, a church with deep roots in the garment district of Manhattan, hand-delivered 400 signed postcards to the Vice President of Social Responsibility at Macy’s.

The Human Thread Campaign is of particular significance to Brother Zuba, whose church was formed by German immigrants in 1840 – many of whom worked in the local garment district. “The women in Bangladesh and Honduras who make our shirts and socks [today] are no different from the German immigrants whose meager earnings fed their families and raised the vaults of Saint John the Baptist.” Bro. Zuba was encouraged by the warm reception he and his parishioners received from Macy’s in response to their action, and he plans to continue to search for ways to “reduce the distance between us and the people who make our clothes. Likewise, let us reduce the distance between us and the people who sell us our clothes.”

As the Human Thread Campaign puts it: “The best way we can say ‘Amen’ to those who produce our clothing is to work to make their living situation better so that all will know we are Christians in the ways we try to love these neighbors as ourselves. Wouldn’t we want them to do the same if we were in their shoes?”§

Faith in Action: To date, MOGC has distributed over 8,000 Human Thread Campaign postcards to supporters around the country – with more available. Call us at (202)832-1780 or email ogc@maryknoll.org to request postcards be mailed to you to distribute among your community.