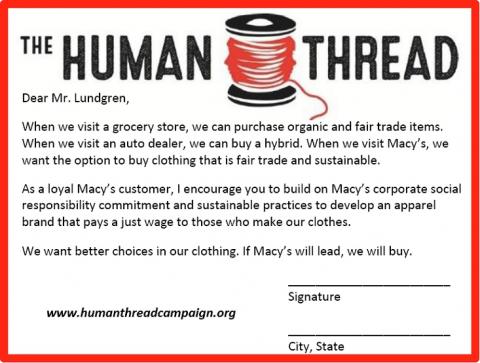 The Human Thread, a Catholic advocacy group for garment workers, launched a national postcard campaign that asks Macy's and Kohl's to add a fair trade clothing item to their department store racks and shelves. The following article was published in the November-December 2016 issue of NewsNotes.

"When we visit a grocery store, we can purchase organic and fair trade items,” the postcard produced by the Human Thread reads. “When we visit the auto dealer, we can buy a hybrid. When we visit Macy's / Kohl’s, we want the option to buy clothing that is fair trade and sustainable."

The timing of the campaign – beginning shortly after Labor Day (September 5) and running through Black Friday, November 25 – is meant to connect the struggle for workers' rights in this country with today's consumer culture which often supports goods produced by people working in sweatshops in distant countries.  In an article with the National Catholic Reporter, Capuchin Father Mike Crosby, founder of The Human Thread, said that means these workers earn wages unable to support their basic needs.

“If you really look at it, Father Mike said, “there's probably not a piece of [clothing] that you are wearing at this moment, or anyone, that is not coming from a sweatshop. We live and breathe that reality of exploited labor," he said.

Faith in action: To request that we mail postcards to you that you can sign, stamp, and mail to Macy’s and Kohl’s, email ogc@maryknoll.org or call (202) 832-1780. There are two postcards - one to the CEO of Macy's and one to the CEO of Kohl's. Let us know the number of postcards you want, and your name and mailing address.

Learn more about the Human Thread Campaign at http://www.humanthreadcampaign.org/.