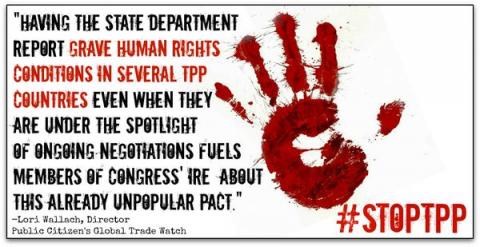 The report details jailing of political dissidents and anti-union repression in Vietnam, as well as Brunei’s enactment of a sharia-based penal code that punishes homosexuals and single mothers, who could be stoned to death once the code is fully implemented later this year. Vietnam and Brunei are two of the 12 nations negotiating the TPP.

Democrats and Republicans in Congress have criticized the TPP’s inclusion of countries notorious for human rights violations. Recent congressional letters have spotlighted Vietnam and Brunei as inappropriate trade pact partners given the severe human rights issues in those nations spotlighted by past State Department reports.

"Having the State Department report grave human rights conditions in several TPP countries even when they are under the spotlight of ongoing negotiations fuels members of Congress’ ire about this already unpopular pact," said Lori Wallach, director of Public Citizen’s Global Trade Watch.

In [the June 25] report, the U.S. Department of State spotlights Brunei’s enactment in May 2014 of a new penal code that criminalizes homosexual and extramarital relations. When Brunei’s code is fully implemented, these and other "crimes" are slated to be punishable by flogging, dismemberment and death by stoning.

With respect to Vietnam, the report spotlights "arbitrary or unlawful killings," "continued [efforts] to suppress political speech through arbitrary arrest, short-term detentions without charge, and politically motivated convictions," and restrictions on press freedom due to government censorship and "pervasive self-censorship due to the threat of dismissal and possible arrest." It also focuses on Vietnam’s continuing repression of basic labor rights, including a ban on independent unions, use of forced labor and widespread child labor. The report notes that the Vietnamese government itself has estimated that there are 1.75 million child laborers in Vietnam.

Despite Congress’ passage of Fast Track … the push to gain congressional approval for the TPP becomes more politically fraught as 2016 draws nearer, with presidential contenders from both parties recently adding their voices to the widespread criticism of the pact. The human rights violations unveiled in [the June 25] U.S. Department of State report will only fuel broader opposition to the pact among members of Congress, the public and presidential candidates.