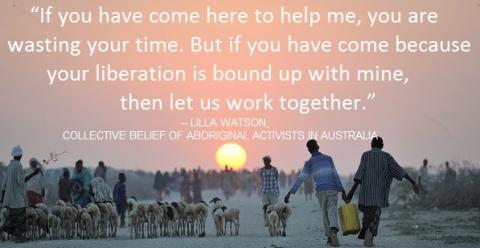 Less than one hundred days into the new Trump presidency and it clear that we are experiencing a profound ideological shift that will have a large impact on both the United States and the world. The following article was published in the March-April 2017 issue of NewsNotes.

The wave of intolerance, authoritarianism, and exclusion that recently moved across Europe and parts of Asia and Africa has also washed over the United States. It brings with it a cold darkness.

Maryknoll missioners recognize this darkness – its shadows have long been present in struggling, marginalized communities around the world, including the United States.

The Maryknoll missioner goes on mission with eyes wide open to the realities of the global economy, natural environment, and migration patterns. All three are broken and in various stages of crisis. Yet we believe they will not weave themselves into a global darkness that will consume us; but rather, they are part of what Joanna Macy and David Korten have called the “Great Turning.”

“The Great Turning is a name for the essential adventure of our time,” Joanna Macy says, “[It is] the shift from the industrial growth society to a life-sustaining civilization.”

We are turning away from the industrial growth society that feeds the darkness. The themes of Catholic social teaching are fuel for our lanterns to see through this time and reach what David Korten has described as a life-centered, egalitarian, sustainable, democratic "Earth Community."

More strongly than ever, we affirm and protect life and the dignity of the human person; and the rights of people to those things required for human decency – starting with food, shelter and clothing, employment, health care, and education.

We also affirm and protect the call to family and community, and the corresponding responsibilities of people to one another, our families, and the larger society. All people have a right to participate in the economic, political, and cultural life of society. The state has a positive moral function. It is an instrument to promote human dignity, protect human rights, and build the common good.

The moral test of a society is how it treats its most vulnerable members. A healthy society is one which gives special attention to those with special needs, to those who are impoverished, and on the margins of society – not in charity alone, but in the pursuit of justice and sustainable peace.

“If you have come here to help me, you are wasting your time. But if you have come because your liberation is bound up with mine, then let us work together.”

Lilla Watson, an indigenous Australian, shared this lesson which she learned from Aboriginal activists in Queensland in the 1970s during her speech at the 1985 United Nations Decade for Women Conference in Nairobi.

This is the time for solidarity with all that is life-giving, and resistance against all that is not.

The principle of solidarity demonstrates that “we the people” is all of us. “Solidarity highlights in a particular way the intrinsic social nature of the human person, the equality of all in dignity and rights and the common path of individuals and peoples towards an ever more committed unity.” (Compendium of the Social Doctrine of the Church)

As U.S. political values shift toward an avowed nationalistic orientation, we stand firmly committed to a unity rooted in inclusion of all.

Maryknoll missioners make a life-choice to go beyond national, political, economic, and cultural boundaries. Over more than one hundred years on mission, we have learned that we inhabit a global, pluralistic, multicultural human society that is often characterized by a warm hospitality. From our earliest days we have been welcomed by many of the worlds’ peoples – Chinese, Korean, Japanese, Tanzanian, Kenyan, Peruvian, Samoan, Muslim, Hindu, traditional believers, Ainu, Amayra, and Luo, to name just a few. We have been granted visas and work permits by countries in Asia, Africa, Latin America and the islands in the Pacific.

This global hospitality to missioners from the U.S. has influenced how we think about our own U.S. society, especially when, in times of heightened nationalistic concern, it turns against certain ethnic or marginalized groups. When the Nisei [Japanese for “second generation” and refers to the children born in North and South America to Japanese-born immigrants] were sent to internment camps in Montana, Maryknoll missioners accompanied them.  When refugees flooded into Hong Kong, Tanzania, Mexico, and the U.S. at different moments in history, Maryknoll missioners welcomed them.

Our long-term presence in a multitude of nations and cultural settings has made us aware of the impact that the internal life of the United States – the political arrangements, economic practices and societal values – has on people throughout the world, for good and for bad. The United States’ global presence is multi-faceted and not simply based on a narrow calculus of transaction.

“As society becomes ever more globalized,” Pope Benedict said in 2009, “it makes us neighbors but does not make us brothers.”

We need to connect on a fundamental level with our obligations to the whole of humanity. With gratitude, Maryknoll missioners have found a growing demand outside of the U.S. for an international common good, to address the broken systems that bind us all. An international common good is consistent with our belief that God is a merciful God of all people, that we must care for creation together, and that war and the path of violence are always massive failures for humanity.

The Maryknoll Office for Global Concerns has named three priorities for advocacy efforts for 2017.

In each of these priorities, we need the United States to be a part of the response. This means investing in alternatives to the industrial growth model and turning the gaze of U.S. citizens away from politico-economic nationalism based on self-interest and toward our obligations to the whole of humanity.

We face resistance. In the Joy of the Gospel, the pope says it is best to maintain a “willingness to face conflict head on, to resolve it and to make it a link in the chain of a new process.” … “In this way it becomes possible to build communion amid disagreement, but this can only be achieved by those great persons who are willing to go beyond the surface of the conflict and to see others in their deepest dignity. This requires acknowledging a principle indispensable to the building of friendship in society: namely, that unity is greater than conflict.”

By seeking to build communion amid disagreement, to see the deepest dignity of those with whom we have conflict, and to uphold the principle of unity, we resist the darkness and shine our light before all.