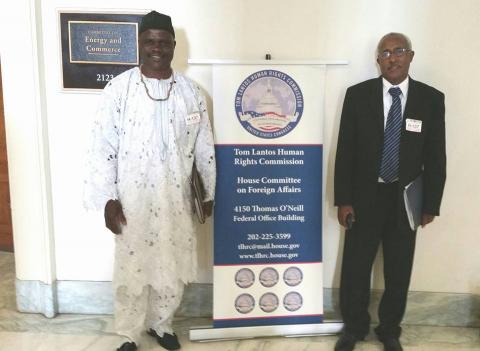 The following article, written by Kristen Miano, a graduate student at American University who is interning with the Maryknoll Office for Global Concerns this summer, appears in July-August 2015 NewsNotes.

June is Torture Awareness Month, and the Torture Abolition and Survivors Support Coalition (TASSC) sought to bring plenty of awareness to the issue with their Survivors’ Week Conference.

The conference kicked off with a series of lectures, stories, and panel discussions on June 24 at Catholic University. The auditorium was packed not only with supporters of the TASSC, but also numerous survivors of torture from all around the world, including countries such as Ethiopia, Cameroon, Russia, and Nigeria.

United Nations Special Rapporteur on Torture Juan Mendez opened the conference with a keynote address about his work with the UN, including his struggles to obtain access to certain countries where human rights abuses are prevalent, the roadblocks he has encountered while trying to assess the conditions in the Guantanamo Bay detention facilities, and his own disappointment with the immigration detention facilities in the U.S.

"Why do we use detention as a means of deterring people who want asylum and protection?" Mendez asked during his speech. "We need to support those who can bear witness and tell them there is life after torture."

After Mendez’s speech, the conference continued with two panel discussions. The first covered issues of political space and conflict in African and Middle Eastern nations and their relationships to the human rights abuses being committed in those countries. In addition to a frank discussion of the issues, the panel also stressed how important it is for advocates against torture to speak out, whether it is to Congress or in day to day life.

The next panel featured a discussion about the practice of immigration detention within the United States. The panel led off with a story from Charles Forchenmbin (left in photo), a torture survivor from Cameroon who came to the United States seeking asylum, but was instead placed in an immigration detention facility for seven months in Arizona. Forchenmbin spoke not only of the terrible conditions in the facility, but also of the trauma he experienced from being detained as a survivor of torture. For many torture survivors seeking asylum in the U.S., being detained can retraumatize them, bringing back memories of their experiences with torture.

Following Forchenmbin’s story were discussions of the experience of Lindsey Wilkes, a lawyer working with survivors in these detention facilities, and her own struggles with getting access and being allowed to provide adequate assistance to her clients. According to Wilkes, more than 80 percent of migrants do not get a day in court and often the bail set for detainees – upwards of $10,000 for a detained immigrant – is higher than that set for people facing actual criminal charges in the United States.

Closing out the panel was Rebecca Nathanson from the office of Rep. Adam Smith (D-WA), speaking about the congressman’s upcoming piece of legislation, the Accountability in Immigration Detention Act of 2015. Though the bill has not gained much traction yet, Nathanson expressed her hope that the advocates present at the conference would be able to reach out to their own representatives to draw attention to the issue.

On June 25, the advocates, supporters and survivors did just that, as 13 separate delegations took to Capitol Hill to not only lobby their representatives and senators, but also to appear before the Tom Lantos Human Rights Commission. Three survivors from TASSC shared their stories with the commission and implored the members of Congress present to assist them in drawing attention to the practices of torture and human rights abuses in their home countries.

Friday was a day set aside for peace and healing as the survivors gathered to not only share their stories, but also to share their cultures with one another. To foster this community of healing, the survivors participated in a group craft project in which they all created cranes out of colored paper to be displayed in the TASSC office at the end of the week.

The final event of Survivors’ Week, a planned vigil at the White House, was unfortunately rained out, but the event was moved to the TASSC offices where the entire conference community gathered for a day of sharing, music, celebration, and a renewed commitment to the fight for a torture free world.