Time for a new sanctuary movement 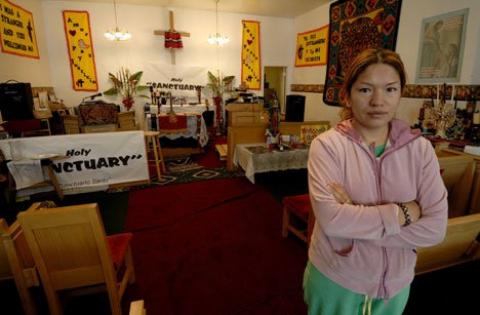 That there is an immigration crisis in this country with great humanitarian concerns is widely acknowledged; the question remains how to address this complicated legal, political and community issue.

Congress has failed to pass immigration reform this year and President Obama’s promise to take executive action has thus far gone unfulfilled – meanwhile the situation for those without legal status in this country worsens. With 1,000 people being deported daily, faith communities around the country increasingly feel compelled to action and are looking for ways to alleviate the suffering of their neighbors and protect the human rights of men, women, and children fleeing their home countries in search of economic opportunities, to reunite with family members, and/or fleeing violence in their communities. Many church communities and congregations are getting involved in reviving the Sanctuary movement (now known as Sanctuary 2014) to declare their religious spaces a safe haven for migrants facing imminent deportation.

The Sanctuary movement to protect Central American migrants was born in response to an enormous wave of people who fled the wars in Nicaragua, El Salvador and Guatemala. Faith communities along the U.S./Mexico border began publicly allowing immigrants facing imminent deportation to live in their churches until authorities reversed the deportation orders, a strategy that grew to a nationwide movement which at its peak included over 500 religious communities across the country. The Sanctuary movement successfully brought attention to the plight of migrants at that time and resulted in many being granted asylum in the U.S. With the 2014 revival, currently there are six active cases of individuals facing imminent deportation who are living within church walls, two dozen congregations who are prepared to offer Sanctuary when the need arises, and dozens of other congregations and religious groups who are publicly endorsing the Sanctuary 2014 movement. Supporters of the movement can help protect those in Sanctuary by raising public awareness of their situations as well as advocating on their behalf to Immigration and Customs Enforcement (ICE), Congress and the Obama administration to take action to stop the deportation of people who are deeply integral to the U.S. community.

Southside Presbyterian Church in Tucson, AZ, first to implement the strategy in 1982, is back at the forefront of the movement providing sanctuary for Daniel Neyoy Ruiz earlier this year for one month until he received a one year stay on his deportation. Ruiz has lived, worked and supported his wife and son in the U.S. for 14 years. Rosa Robles Loreto, who has lived in the U.S. for 15 years with her husband and two children, is Southside’s latest Sanctuary resident. Loreto was arrested and detained for 53 days after a minor traffic violation when police discovered her immigration status. Subsequently, Loreto was asked by the U.S. government to voluntarily deport or face indefinite threat of deportation should ICE decide to pursue her case – which is when she turned to the church for refuge.

Legal recourse for migrants who do not have authorized status in the U.S. is a complicated matter. Sanctuary 2014 is currently focused on cases of individuals like Ruiz and Loreto, who are considered low-priority cases due to their longstanding relationships in the U.S. but are facing imminent deportation. According to a 2011 internal ICE document known as the “Morton Memo,” immigration officials are instructed to use their discretion in pursuing cases in an effort to make best use of available funds and resources – something known as “prosecutorial discretion.” The memo says clearly that ICE officers should take into account how deeply integrated into the community a person is – whether or not they have attended school in the U.S, if they are caring for sick relatives, forming families, even serving in the U.S. military.

These are very different circumstances for bringing migrants into Sanctuary than the first time around. In the early 1980s faith communities recognized that people crossing the U.S./Mexico border were mainly fleeing civil wars, political repression and violence perpetrated by state governments and military – circumstances which warranted protection by the U.S. government under international law. Migrants who are arriving today for economic reasons, to be reunited with family members already in the U.S., or who are fleeing drug and gang violence in their home countries may have a case but do not necessarily qualify as refugees. Under the 1951 Convention Related to the Status of Refugees and the subsequent 1967 Protocol, a person must satisfy two conditions: 1) Must be unwilling or unable to return to their country of origin “owing to a well-founded fear of being persecuted”; and 2) that persecution must be for one of the following reasons: “Race, religion, nationality, membership of a particular social group or political opinion.” Non-state actors (such as gangs) can be considered persecutors, provided that “they are knowingly tolerated by the authorities, or if the authorities refuse, or prove unable, to offer effective protection,” according to UNHCR guidelines on interpreting the law. But someone who has been a victim of gang violence in their home country must also prove that they are part of a targeted group. Decisions to grant refugee status are made on a case by case basis, and interpretation of the law is subject to court precedents and at the discretion of immigration judges. At this point, Sanctuary cases are a different group of migrants – those who would benefit from an expansion of the use of prosecutorial discretion by ICE officials, and/or through executive action, should Obama decide to unilaterally act to provide a path to citizenship for those who are integral to our communities.