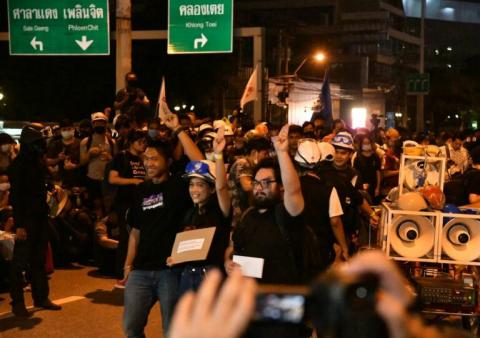 The following update on the Thai government’s response to the growing pro-democracy protests was published by the Union of Catholic Asian News on October 22 at https://bit.ly/3eaFFUd. This article was published in the November-December 2020 issue of NewsNotes.

Thailand’s autocratic government is stepping up its campaign against independent local media outlets in response to daily youth-led mass protests in what observers say is a severe threat to press freedom.

In the latest move, a court on Oct. 20 approved an order by the Thai government to shut down “all platforms” of Voice TV, a Bangkok-based television channel with a wide viewership, over its coverage of the ongoing pro-democracy protests that have been drawing tens of thousands of people around Bangkok and elsewhere in Thailand for days.

The decree, issued last week by Prime Minister Prayut Chan-o-cha, gives sweeping powers to the authorities, including censoring all news on the youth-led protests in the interest of “national security.”

The protesters, most in their teens and twenties, have been calling for Prayut, a former army chief, to resign after more than six years in power.

They are also calling for democratic reforms in a country that has been ruled by a conservative military-dominated regime with Prayut at the helm since he spearheaded a coup that unseated an elected government in 2014.

Over the years, Prayut’s government has resorted to various repressive tactics to limit the free flow of information. Yet, its latest move is seen as an escalation against independent media outlets in Thailand, a country once known for its raucous media landscape.

The management of Voice TV, which has been operating for more than a decade, said in a statement that it would remain committed to honest reporting.

“For 11 years, Voice TV has been a media committed to democracy, giving space to people’s opinions from all sides with openness, transparency, and responsibility to facts,” the channel’s executive Makin Petplai wrote in response to the shutdown order.

Prayut’s government is also considering forcing three prominent online news sites to shut down in a bid to limit coverage of the ongoing protests.

The Thai Journalist Association has condemned the government’s heavy-handed attempt at censorship and warned that it could backfire. “Censoring the media in this way is an attempt to block the public’s rights to have access to the news,” it said in a statement. “As a consequence, more members of the public affected by this censorship may end up joining the demonstrations.”

At the same time, Thai authorities have made it illegal for all citizens to attend anti-government protests and post about them online.

Police have warned that anyone found taking pictures at a protest and posting them online could be sentenced to two years in prison for violating the emergency decree.

“We are under the severe state of emergency, which is a special law,” police spokesperson Krissana Pattanacharoen said. “We must take this law seriously.”

In recent days Thai authorities have also been censoring foreign news coverage of pro-democracy rallies by cutting the feed of broadcasts by the BBC and other news outlets.

The Foreign Correspondents’ Club of Thailand (FCCT) said in a statement on Oct. 20 that it was “deeply concerned” about the concerted government efforts at large-scale censorship.

“A free media is an essential element in any democratic society, and bona fide journalists should be allowed to report important developments without the threat of bans, suspensions, censorship or prosecution hanging over them,” the FCCT said.

“This move is also likely to be ineffective and counterproductive in an age of social media, where there are far too many ways in which information and comment of uncertain quality can be disseminated to censor,” it explained.

“It makes the government appear heavy-handed and unresponsive to criticism, and could stir up even more public anger,” the FCCT added.