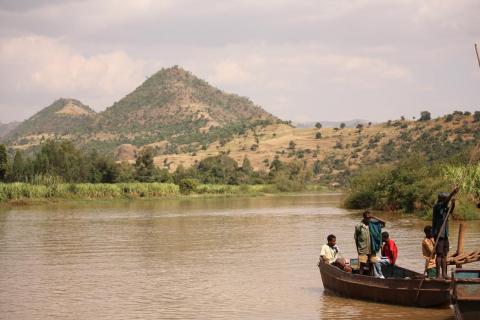 Ethiopia’s continued construction of a major dam on the Blue Nile has caused consternation with neighboring Egypt and Sudan.The following article was published in the September-October 2020 issue of NewsNotes.

Renewed tensions over Ethiopia’s major dam project on the Nile River, the Grand Ethiopian Renaissance Dam (GERD), have prompted the African Union to intervene in mediation efforts. The Blue Nile is an essential water source for Egypt and South Sudan, whose leaders fear the project will threaten their already water vulnerable populations. However, the Ethiopian government insists that the hydro-electric power generated by the dam will not only help modernize its own economy but also contribute to regional development.

The Blue Nile, which originates at Lake Tana in Ethiopia, supplies more than 80 percent of the water that flows in the Nile from Khartoum, Sudan, to Egypt. Egypt fears that Ethiopia’s growing use of the water for irrigation and electricity could cause major disruptions for its citizens, as it is uniquely water vulnerable among the countries along the Nile. Egypt is located in one of the harshest, driest deserts in the world and its 102 million people rely entirely on the Nile water for irrigation, domestic use, and electricity from the Aswan High Dam, the world’s largest embankment dam, built in the 1960s.

To protect this vital water source, Egypt has signed two treaties governing control of the water in the Nile. The first treaty in 1929 was between Egypt and Great Britain, the colonial power in East Africa, which gave Cairo the right to veto projects higher up the Nile affecting its water share. The second, in 1959, between Sudan and Egypt, gave Egypt 55.5 billion cubic meters of Nile water per year and Sudan 18.5 billion cubic meters, out of an average total of 84 billion cubic meters. These treaties prevented the other countries along the river, which gained independence in the early 1960s, from utilizing Nile water resources for national development, a source of deep resentment ever since.

In 1999 over seven countries signed the Nile Basin Initiative (NBI) to promote cooperation on the use of “common Nile Basin water resources.” That initiative led to the Cooperative Framework Agreement that was signed by Tanzania, Kenya, Ethiopia, Uganda, Rwanda, and Burundi beginning in May 2010. The 2010 agreement called for a spirit of cooperation and for the countries to refrain from significantly affecting the water security of any other Nile Basin State. Egypt and Sudan rejected this agreement, insisting that the agreement must also protect the current rights and uses of water by any of the Nile Basin States. Such protections would have allowed these two countries to continue using most of the Nile water, effectively denying the other nations from its use.

Ethiopian Prime Minister Meles Zenawi laid the foundation for GERD in April 2011 and construction began in 2013. The GERD is a $4.6 billion project which will eventually produce over six thousand megawatts of electricity, for domestic use and for export to neighboring countries. Egypt was hostile to the project from the beginning, prompting tense exchanges between the two nations.

In an attempt to resolve hostilities, in 2015, Egypt, Sudan, and Ethiopia issued a Declaration of Principles, also called the Nile Agreement, which highlighted the importance of fair and equitable use of the water, regard for others when embarking on projects on the Nile, and agreement on effective and binding mechanisms for settling disputes.

As Ethiopia persisted in construction of the dam, Egypt became alarmed and sought international mediation. In February 2020, the Trump administration unsuccessfully tried to mediate. Further mediation through the United Nations also failed in June, after which the African Union, under South African President Cyril Ramaphosa’s chairmanship, took over. Since then talks have been intermittent.  Ethiopia began filling the dam in July, a process that could take up to five years. On August 15, Sudanese and Egyptian officials met in Khartoum, Sudan, and called for a solution based on the 2015 Declaration of Principles.

The Ethiopian government argues that the filling will not divert sufficient water from the Blue Nile to adversely affect either Sudan or Egypt, but on July 15 the government of Sudan stated, “Measuring the Blue Nile level..showed a decline in water levels equivalent to 90 million cubic meters per day, which confirms the closure of the gates of the dam.”

Experts say that there are actions that both Sudan and Egypt can take to compensate for loss of water from the Blue Nile. One is the completion of the Jonglei Canal, which is currently prevented by war in South Sudan and a lack of funding. This canal would speed the flow of water through the Sudd in central South Sudan and greatly reduce water loss due to evaporation. For more equitable use of water, Egypt could also dismantle the Aswan High Dam, as problems with its construction cause huge amounts of water to be wasted.

As of this writing, diplomatic talks have not yet resumed. Ethiopia is continuing to fill the dam and no military threats have emerged. Hopefully the African Union’s mediation efforts can lead the three countries to an amicable solution.