A tale of two Sudans 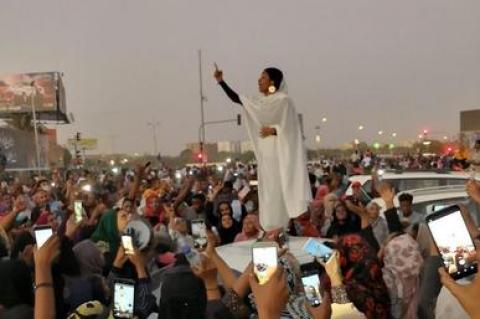 The people of both Sudan and South Sudan are experiencing grave uncertainties about the possibilities of freedom, democracy and peace. This article was published in the May-June 2019 issue of NewsNotes.

When the price of bread increased 300 percent in December 2018, the people of the city of Atbara took to the streets of this midsized town in Sudan. The energy of their protests spread throughout the country and grew into a nationwide movement that brought down the government of Omar al-Bashir on April 11.

Bashir had taken power over Sudan in a military coup in 1989. He has been indicted by the International Criminal Court (ICC) for his role in directing crimes against humanity including rape and torture, war crimes, and genocide that allegedly occurred in the Darfur region during his three decades of rule. He is currently being held in Kober prison in Sudan and the country’s military says it will not extradite him to the ICC. Bashir will be tried in Sudan.

The Sudanese Professionals Association (SPA) has led the peaceful uprising, calling for freedom, democracy, and peace. Numerous religious and ethnic groups have united in ongoing peaceful demonstrations. The protesters demand a transitional civilian council to lead the country, with limited military representation and an interim Cabinet to oversee the drafting of a new constitution. The Military Transitional Council insists it will maintain power over a civilian Prime Minister and Cabinet until elections are held.

Before the coup, the SPA encouraged members of all faiths to join the protests. Sudan’s constitution guarantees religious freedom, but Islamic law is the state religion. They were often harassed and restricted by the National Intelligence Service. The day after the coup, during Friday prayers for Muslims, Christians stood arm-in-arm to protect Muslims from the security forces while they were praying.

Women leading the movement in Sudan

Women have played a prominent role in the uprising. Referred to as kandakas, the queens of ancient Sudan, one woman has emerged as the face of the movement. Alaa Salah, a Sudanese student and protestor, has become known as the "Woman in White" or "Lady Liberty" of Sudan after a local photographer captured her dancing on the top of a car in the capital of Khartoum while surrounded by a sea of protestors, with her arm raised in the air, finger pointed toward the sky and singing a Sudanese poem about how silence kills. The photo has since gone viral on Twitter.

Image: Alaa Salah, a Sudanese student, standing on a car in the 2018–19 Sudanese protests. The image went viral as a symbol of the protests. Photo by Lana H. Haroun and licensed under Fair Use.

Salah has told reporters she rejects this notoriety and that the Sudanese people, especially those who have died, been injured or detained, are the true icon of the revolution. The Strategic Initiative for Women in the Horn of Africa (SIHA) has voiced their support, calling for equal citizenship, equal access to resources, the removal of laws that discriminate against women and platforms in the transitional government to develop family law based on the rights of women and children.

Bashir was a guarantor for the peace agreement in Sudan’s southern neighbor, South Sudan, brokered in 2018, to end the civil war that began in 2015. The agreement stipulates that a unity government would be formed in South Sudan by President Salva Kiir and former first Vice President Riek Machar by May 12, 2019. In April, both Kiir and Machar were invited to the Vatican for a two-day spiritual retreat meant to foster peace. At the end of the retreat, Pope Francis begged the men to set aside their differences and bring peace to South Sudan. “I am asking you as a brother to stay in peace. I am asking you with my heart, let us go forward,” the pope said. Breaking papal protocol, he knelt and kissed their feet in a humble gesture of respect.

However, Machar has stated that he is unable to form a unity government by this date and threatened to pull out of the accord entirely. He demands a six-month extension.

Increasingly, it appears that this agreement addresses issues important to a limited number of warlords and even fails in that sphere. The border between Sudan and South Sudan has benefited from mutual trade for two years and a weakened government in Sudan will not be able to stop this. The mass demonstrations in Sudan are absent in South Sudan, where people have even more reason to demonstrate. The South Sudanese function at the level of survival and the secret service is greatly feared and ruthless. Losing Bashir as a guarantor of the revitalized peace agreement seems irrelevant.

The International Governmental Agency on Drought (IGAD) Special Envoy to South Sudan has called for a meeting of the leadership of the Revitalized Agreement on the Resolution of Conflict in South Sudan in Addis Abba, Ethiopia on May 2-3 to find a way forward. Meanwhile, there is serious concern that South Sudan could return to civil war.