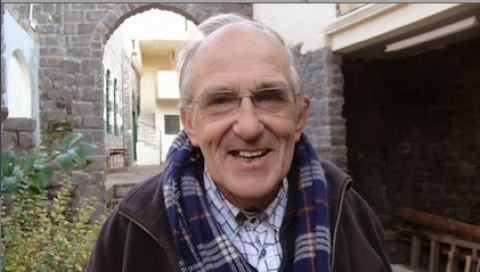 The following article, written by Marie Dennis, co-president of Pax Christi International and former director of the Maryknoll Office for Global Concerns (MOGC), was published in the May-June 2014 NewsNotes. The photo was taken from the Catholic Herald.

On Monday morning, April 7, Frans van der Lugt SJ (pictured), a 75-year old Dutch Jesuit who had lived and worked in Syria since 1966, was kidnapped, beaten and executed by unidentified assailants in front of the Jesuit residence in Homs. The Jesuit residence is in the Hamidiyeh district, a traditional Christian neighborhood where fighting between opposition armed forces and the Syrian army has been ongoing for months. Fr. van der Lugt worked with young people with disabilities, and continued to accompany both Christians and Muslims who were unable to escape the violence. The priest was known for a video in which he called on the world for help.

His death should bring international attention to the ongoing violence in Syria, but the complexity of the situation, the failure thus far of a negotiated political solution, and the unwillingness of external players to abandon lucrative arms sales or their support for foreign fighters and extremists (whose numbers have grown from about 1,000 a year ago to perhaps 8,000 now) have left the Syrian people subject to horrific brutality. This includes starvation as a weapon of war; barrel bombs (particularly in Aleppo); suspected additional use of chemical weapons; and displacement at an unimaginable rate. Even the so-called ceasefires in towns and neighborhoods around Damascus and the road to the coast are often negotiated surrenders and, in some cases, the situation still doesn’t improve.

Conditions in the Palestinian refugee camp at Yarmouk in Damascus demonstrate the ongoing suffering. Yarmouk is still besieged; the United Nations Relief and Works Agency for Palestinian Refugees in the Near East (UNRWA) is only allowed to deliver small amounts of food every now and then. An article in The Guardian on April 19 notes that "[to] keep the remaining residents from starving, UNRWA says it needs to deliver at least 700 food parcels per day, each of which feeds five to eight people. It has only managed to get in 100 per day on average since the start of the year. However, conditions have drastically worsened in recent weeks, with all supplies stopped amid regime demands that rebel groups inside surrender."

At the same time, Syrians continue to work for peace and human dignity throughout the country. Women in particular are making a tremendous contribution to peace and democracy. Read more here.

PAX, a Dutch member organization of Pax Christi International, has been working in Syria since 2003, expanding its program and advocacy since 2011 in support of many of these courageous non-violent civil society activists. In cooperation with Syrian organizations and the Dutch Association of Municipalities, PAX developed a program to support local councils and civil society in five pilot communities. The objective of the program is to strengthen the position of these civil society actors, facilitating their interaction with and strengthening their impact on the behavior of armed groups in order to develop a social contract in areas where civil institutions of the state have disappeared.

PAX and its partners have developed an approach to freedom of religion and belief, based on citizenship. Rather than the "minority protection" approach, the program, Kulluna Muwatinin, which runs in Iraq as well as Syria, encourages a young generation of potential community leaders to promote citizenship, organize dialogue and interaction between different religious and ethnic communities, and facilitate discussion about managing diversity.

PAX also has worked with SouriaLi, a grassroots online radio station dedicated to working with the Syrian people to foster awareness about the meaning of civil society, active citizenship, communication, women’s empowerment and youth activism.

There is no military solution to the violence in Syria. In letters to the editor and communications with President Obama and Secretary of State Kerry, urge the U.S. to:

These talking points were crafted by several policy analysts who have been following the Syrian crisis closely.

The Syrian crisis began as part of the broader Arab Spring. It began with a popular call for an end to repression, and as a nonviolent political movement demanding accountability from the Syrian government and the release of political prisoners and detainees. It began, like so much of the Arab spring, as a broad campaign for dignity and the rights of citizens. There were also crucial economic and environmental issues – including a crippling drought and the slashing of key subsidies – that underpinned the crisis.

The government of Syrian President Bashar al-Assad responded with an unfulfilled promise of reform and with terrible violence. That violence occurred in the context of a longstanding system of patronage, in which as much as 30 percent of the population depended on the regime for jobs and economic interests. Many Syrian activists took up weapons in response, and as the fighting spread, Islamist fighters, many of them non-Syrians and many of them violent extremists, joined the anti-government battle, and the Syrian spring quickly morphed into a civil war. Three years on, the civil war has itself broadened into at least six overlapping but separate wars – national, regional, sectarian and international – that have created a huge humanitarian crisis of death, destruction and displacement.

The moral appeal of Syria’s original political movement remains – and we stand with those struggling for equality, dignity, and human rights for all Syrians. But we stand by the principle that there is no military solution in Syria. Further military action, particularly U.S. military action, will only increase the levels of violence and instability inside Syria, within the region, and even globally – it will not make the situation better for Syria’s beleaguered civilians. There must be an urgent ceasefire, an arms embargo on all sides, and a negotiated solution including representatives of the original nonviolent democratic protest movement in Syria – who are still struggling under tremendous odds, though their voices are too often drowned out by the violence around them.

OUR CALL FOR U.S. ACTION FOR PEACE IN SYRIA

1. The U.S. should, first, do no harm. The U.S. should support UN decision-making, international law and diplomacy instead of military force. The U.S. government should make good on its frequent statement that “there is no military solution in Syria.” That means there should be no U.S. military strikes or threats of strikes, and an end to all further military involvement in Syria, including arms shipments. This is a point of principle, not timing – we are not saying “no military intervention unless….” or “until….” because even if efforts for a ceasefire, arms embargo, diplomacy, etc. do not immediately succeed, we know that U.S. military involvement will make things worse, not better.

2. Stopping U.S. military involvement in Syria is only step one; we must demand a policy that helps bring an end to the horrific civil war. The U.S. should call for and support an immediate ceasefire by all sides and a comprehensive international arms embargo. It should announce immediate plans to stop sending or enabling the provision of any arms to any rebel forces and to prevent U.S. allies from doing so, while simultaneously renewing pressure on Russia and Iran to stop sending any arms to the Syrian government side. Washington should be prepared to strengthen and enforce end-use agreements on arms exports to exert necessary pressure on its regional allies, including Saudi Arabia, Qatar, the UAE, Turkey, Jordan, Israel and more. The U.S. should make clear to these arms recipients that if they continue providing arms to any side in Syria, the U.S. will cancel all existing weapons contracts with them. The U.S. should make clear in the UN Security Council that it is prepared to support a resolution imposing a complete and enforceable arms embargo on all sides of the Syrian conflict.

3. The U.S. should urge the United Nations to take the lead in re-opening international diplomatic negotiations for a political solution in Syria. Those talks must include all sides in Syria, including nonviolent Syrian activists, women, and others of civil society, including representatives of Syrian, Palestinian and other refugees and IDPs forced from their homes in Syria. All key outside parties to the conflict, including Iran, must be included. The U.S. representatives to those negotiations should insist that any settlement provide protection for all communities in Syria, and guarantee the right to safe return for all refugees and IDPs. The settlement must not deny rights to whole categories of people, including those who may have served in the government, the army, or armed opposition militias. Once the ceasefire takes hold, the U.S. should also support efforts towards accountability and justice for all individuals responsible for war crimes that have been committed by both sides in the Syrian war.

4. The Syrian war has created an enormous refugee and broader humanitarian crisis whose impact is spreading across the entire region. That disaster is erupting in the context of Washington’s post-9/11 wars in the Middle East, which have not resolved regional crises but have instead made them qualitatively worse. Half the entire population of Syria has been displaced from their homes. There are more than a million Syrian refugees now among Lebanon’s population, endangering the already fragile social stability of the 4.5 million people there. The huge city-sized Syrian refugee camp of Zaatari, in Jordan, is placing an incredible strain on water and other scarce resources in that desert country.

Syria’s humanitarian crisis is particularly complicated because the victims, those fleeing Syria and the internally displaced and impoverished people still inside the country, include significant numbers of refugees from other unresolved regional conflicts who had been living in Syria. Some Palestinian and Iraqi refugees in particular now have been made refugees three, four or even five times. The U.S. has pledged one of the largest grants of humanitarian aid, but it is still too small and much of it has not been paid out. Simultaneously with the announcement of an immediate arms embargo, Washington should announce a major increase in refugee and humanitarian assistance to be made immediately available to United Nations agencies. It should call on other countries to increase their aid and to coordinate through the UN.

5. The Organization for the Prevention of Chemical Weapons continues to oversee the transfer of Syrian chemical weapons to international control so they may be safely destroyed or removed. The U.S. should support this and further disarmament efforts by endorsing calls for a Weapons of Mass Destruction-Free Zone throughout the Middle East, with no exceptions.