Syria: A memoir of a mission of peace 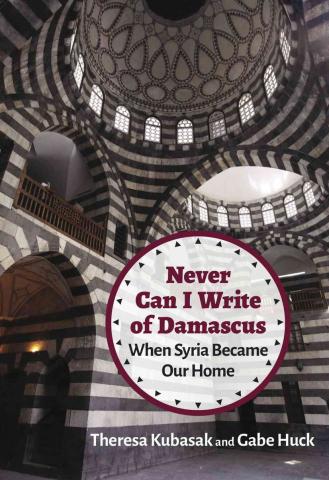 Maryknoll Office for Global Concerns intern Maggie Heidepriem contributed to the following review, published in the July-August 2016 issue of NewsNotes, of Never Can I Write of Damascus: When Syria Became Our Home, a memoir by Theresa Kubasak and Gabe Huck about their seven- year mission of peaceful presence among the Syrians, Iraqi and Palestinian refugees in Damascus, newly published by Just World Books.

In response to the U.S. invasion of Iraq in 2003, teacher Theresa Kubasak and retired publisher Gabe Huck felt called to live in solidarity with the many Iraqis who found refuge in Syria. Responding to that call took them on a seven-year journey of encounter which they describe in wonderful detail in their new memoir, Never Can I Write of Damascus: When Syria Became Our Home.

When they first arrived in Syria in 2005, Kubasak and Huck struggled to find a way to offer some form of restitution to the Iraqi refugees forced to flee their country because of the actions of the United States.  While learning Arabic and acclimating to their surroundings, they lived in the Yarmouk refugee camp in Damascus, once home to over 100,000 Palestinians who fled their homeland in 1948.

Through stories, photos, and drawings, their memoir conveys their grief for a place which is now a memory – Yarmouk refugee camp was largely destroyed during fighting between the Syrian army and opposition groups in 2014. The few thousand remaining residents remain under occupation by ISIS forces and have been subjected to starvation and cold winter temperatures with little protection.

Two years into their mission and after careful discernment, Kubasak and Huck started the Iraqi Student Project in 2007 to prepare young refugees for admission to U.S. colleges. They devoted the next five years to assisting students in navigating the admissions process of American universities, as well as preparing throughout each school year leading up to their departure for college.

Sixty of their “graduates” won admission to colleges all around the U.S. While organizing writing workshops, literature circles, and several other innovative lessons, the couple absorbs the Syrian culture and offered hope and direction to hundreds of students.

The book includes anecdotes from many Syrians, Iraqis, and Palestinians they encountered, including several pieces written by students for the Iraqi Student Project. They depict the struggles, sorrows, and desires each individual faced.  A fourteen-year-old in Damascus writes:

“We felt so much and finally our emotion has spilled out, spilled and flowed away to a hidden place. Only the good-hearted know where it is. We want bread, not blood. We want justice, not commands. We want peace, not truce.”

Today, many of the Syrians who had graciously welcomed Kubasak and Huck to Damascus are now refugees themselves, and the already displaced Iraqis and Palestinians are refugees twice over. As the civil war in Syria rages into its sixth year, thousands of civilian have died and millions of Syrians are fleeing to neighboring countries in a desperate attempt to seek safety.

Kubasak and Huck offer readers an intimate picture of daily life in the heritage-rich country of Syria in the period just before and after the 2011 eruption of unrest there.  Through big and small actions, they demonstrate what a brave and generous spirit can create. This memoir arrives at just the right moment – as countries around the world are searching for a depth of character that matches the breadth of the needs of the millions of people caught up in the largest humanitarian crisis in recorded history.

Faith in action: Never Can I Write of Damascus: When Syria Became Our Home is available for sale at http://justworldbooks.com.