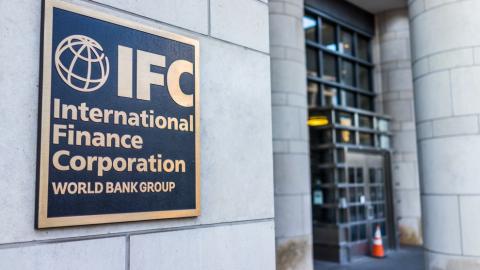 A historic Supreme Court decision declares international organizations like the World Bank Group can be sued in U.S. courts. This article was published in the May-June 2019 issue of NewsNotes.

On February 27, the fisherfolk community of Mundra, India won a precedent-setting victory against the World Bank and other multilateral development banks when U.S. Supreme Court decided 7 to 1 that these international institutions based in Washington, D.C. are not immune to lawsuits for their operations in other countries.

In this case, farmers and fisherfolk in Mundra (Gujarat State) lost their livelihoods from the toxic effects of the IFC-funded coal-fired power plant, the Tatra Mundra Ultra Mega Power Project India. It is a part of a larger project to meet the country’s energy needs. The plan included the construction of additional coal-based thermal stations. The IFC classified it as a Category A project, which means it is high risk and has the potential to have significant, irreversible social and environmental impacts. The project cost is roughly $4.14 billion, of which the IFC contributed $450 million.

The Mundra community initially appealed to the IFC directly through the Compliance Advisory Ombudsman (CAO), the independent accountability mechanism. The CAO ruled in favor of the community but the IFC did not treat the outcomes seriously. As a last resort, represented by Earth Rights International, the Mundra community sued the IFC in the U.S. courts.

The community repeatedly lost their lower court cases and appeals processes. The courts ruled that the IFC was immune to lawsuits as an international entity.

The U.S. Court of Appeals for the D.C. Circuit heard the final case. Justice Brett Kavanaugh, the newest Supreme Court Justice, was on the appeals court at the time. While Mundra lost that case, Judge Nina Pillard suggested that the case was inherently biased towards the IFC and that they should take it to the Supreme Court, which they did.

The Supreme Court ultimately decided that the IFC had to follow the same restricted parameters as other international entities. The IFC argued that this would lead to international organizations like the IFC being named as defendants in mass tort and class action lawsuits in the United States and that would be too costly for the IFC. Justice John Roberts, the head of the Supreme Court opined that it was unlikely that the IFC would be flooded with lawsuits. Justice Kavanaugh recused himself since he has served on the appeals court. Justice Stephen Breyer was the sole dissenting opinion in the case.

In the short term, this decision will allow for the community's lawsuit to be re-adjudicated in the lower courts. But it also won’t improve or resolve the damage already done and ongoing suffering in Mundra.

This decision will allow for another case to go forward, Juana Doe et al v. IFC, in which Earth Rights International is suing the IFC for financing Honduran palm oil company Dinant’s projects in the country’s Bajo Aguán valley, which it began funding in 2009. Linked to the project are the murders of more than 100 farmers and the displacement of many more to make way for palm cultivation. Others say they have experienced torture, threats, and other violence by public and private security forces. The violence continues unabated.

The IFC followed the CAO’s recommendation to create a “lessons learned” document but justice remains elusive for farmers in the Bajo Aguán valley in Honduras.

Read more about the Mundra case and Juana Doe case on the Earth Rights International website at www.earthrights.org. Watch a short video about the community’s victory on Youtube at http://bit.ly/TataMundraVideo