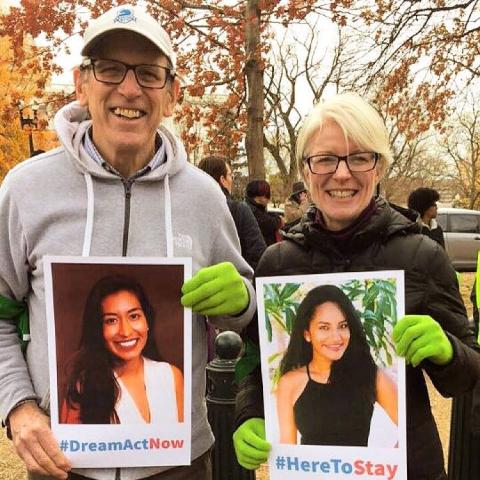 Ilse Cruz, an undocumented college student from Florida, writes about the Deferred Action for Childhood Arrival (DACA) cases set to come before the Supreme Court on November 12. This article appeared in the November-December 2019 issue of NewsNotes.

I’m an undocumented college student and my fate will be decided by the Supreme Court. The court is scheduled to hear oral arguments in cases regarding the Deferred Action for Childhood Arrival (DACA) program on November 12. Two years ago, the Trump Administration ended the program that protects me from deportation.

The DACA program was created in 2012 to allow young, undocumented immigrants who came to the United States before the age of 16 to legally live and work in the United States. I had to complete an application process, pass a background check, provide biometric information, and pay a $495 fee to be eligible to earn a renewable two-year work permit and have my deportation deferred.

When DACA ended in 2017, the government threw 700,000 people’s lives into chaos, including mine. Groups around the country were quick to sue the government against the termination of the program. Courts in California, New York, and Washington, D.C ruled that the way in which the Trump administration terminated the program was unlawful. Thanks to these decisions, DACA renewals remain open, but the uncertainty around the program’s termination has negatively impacted millions of people, not just Dreamers, but also our families, neighbors, and co-workers.

Every one of us is living court-case-to-court-case, unsure if we will be able to stay with our loved ones and continue to contribute to our families and communities. Many Dreamers are now parents of U.S citizen children, have U.S-citizen spouses, or have family members who rely on them for support.

There is bipartisan support for legislation protecting Dreamers. The House passed H.R.6, the Dream and Promise Act, in June, but the Senate has been unable to pass any sort of legislation to protect DACA recipients.

On November 12, the Supreme Court will consider not whether DACA is constitutional, but rather whether the way the Trump administration terminated the program was unlawful. A ruling is expected by June 2020. The lives of 700,000 Dreamers are in limbo once again.

Faith in action: Read the amicus brief that the Maryknoll Office for Global Concerns and 127 religious organizations filed in the Supreme Court, challenging the Trump Administration’s termination of DACA

Photo: Gerry Lee and Susan Gunn of the Maryknoll Office for Global Concerns at the Rally for the Dream Act at the U.S. Capitol on December 7, 2017. Susan Gunn is holding a picture Ilse Cruz. The green gloves indicate that they are members of a group of 300+ people who participated in civil disobedience at the rally on behalf of Dreamers.