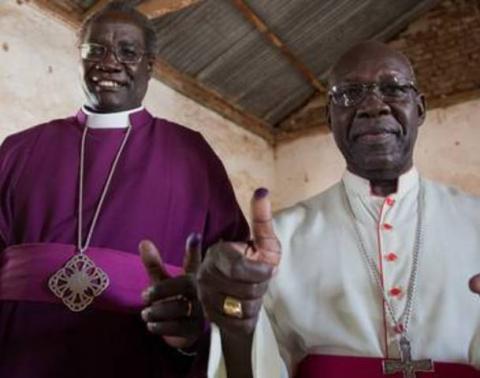 The following article in the November-December 2012 NewsNotes, contributed by Marie Dennis, explains how church leaders responded to the September 27 Cooperation Agreement between Sudan and South Sudan; the agreement covers a number of areas of vital importance, including oil, security arrangements, economic affairs, the status of nationals of the other states, a framework for cooperation on central banking, borders, trade, and other matters.

In their response to the announced agreement, Catholic Archbishop Paulino Lukudu Loro and Episcopal Archbishop Daniel Deng Bul wrote in part: "…We praise the governments of Sudan and South Sudan for their perseverance in negotiations, and we thank the African Union, the United Nations and other members of the international community who have helped to facilitate the talks. We commend our two presidents for their personal role in reaching an agreement. We appreciate some of the confidence-building measures which have already taken place, such as the resumption of flights between the two capitals. It should always be remembered that negotiations are about the lives of the people, not the politics of two governments, so measures which benefit the citizens of both nations are to be welcomed.

"We begin from the basic premise that it is not acceptable for the two nations to go back to war under any circumstances, whatever the differences and difficulties in the negotiations. For this reason we applaud the establishment of a demilitarized buffer zone along our common border…

"The old Sudan was a family which has found itself divided. The family assets must be shared in an equitable way, so that neither side finds itself badly disadvantaged. This is the spirit which should guide negotiations about oil and borders. We welcome the agreement to allow the oil to flow once more, to the mutual benefit of all. The current economic hardship in both countries is affecting the ordinary people, and will certainly affect the development of both nations. Borders should take into account the traditional community boundaries which are known to the chiefs and their people on the ground, and should be porous to recognize traditional grazing and migration rights. If the politicians from Sudan and South Sudan cannot agree, then both sides should accept binding international arbitration.

"We fully support the ‘four freedoms’ agreement on the rights of citizens of either state who find themselves in the other state. Freedom of residence, freedom of movement, freedom to undertake economic activity and freedom to acquire and dispose property are a basic minimum. Sudanese residents in South Sudan and South Sudanese residents in Sudan are not simply ‘foreign aliens’ who have come from nowhere; they are part of the old Sudanese family with long-standing historical, geographical and kinship links which should not be broken by the new political dispensation. We would add that freedom of religion is also a prerequisite for justice, peace and human dignity. The implementation of the agreement on the four freedoms must be closely monitored. Actions taken by the government of Sudan over the past year have already impinged upon these freedoms, and concrete steps will be needed to reassure South Sudanese in Sudan that their rights will be respected…."

According to South Sudan two areas of significant concern remain. One is the chronic problem of implementation of agreements. The second is the crisis over the status of Abyei and the disputed and claimed areas of the border.

Abyei is not a "disputed area" in the same sense as other border areas. Here too, a series of agreements have been dishonored. The 1972 Addis Ababa Agreement, which ended the first war, granted the Ngok Dinka of Abyei the right to decide whether to remain under the administration of the North or rejoin South Sudan from which it was severed in 1905. That provision was never implemented. This eventually triggered a local rebellion that contributed to the resumption of the war in 1983.

The Comprehensive Peace Agreement (CPA) and its Protocol on Abyei granted the Ngok Dinka nine chiefdoms the same right, but that also has not been implemented. The report of the Abyei Boundary Commission (ABC), whose demarcation of the Ngok Dinka borders was supposed to be final and binding, was rejected by Khartoum. The decision of the Permanent Court of Arbitration, which revised those borders by reducing the territory the ABC had demarcated for the Ngok Dinka, though initially accepted by both parties, has not been acted upon. The terms of the June 20, 2011 agreement following the military occupation of Abyei by elements of the Sudan Armed Forces have yet to be fully implemented.

A significant positive step has been taken, but much remains to be done. For example, even as the significant accomplishment of a Cooperation Agreement was being welcomed, Sudan Catholic Radio Network reported that the Sudanese Air Force had dropped bombs on a community in the Nuba Mountains; the peace agreement among six communities in Jonglei State, South Sudan was threatened by a rebel faction led by David Yau Yau; and a food security and nutritional assessment carried out by an international non-governmental organization (but for security reasons made public by the Enough Project) released evidence that food security conditions in South Kordofan are dramatically declining and malnutrition among children is on the rise, with 81.5 percent of households surviving on one meal per day.