Sudan-South Sudan: Witnessing history through the end of war 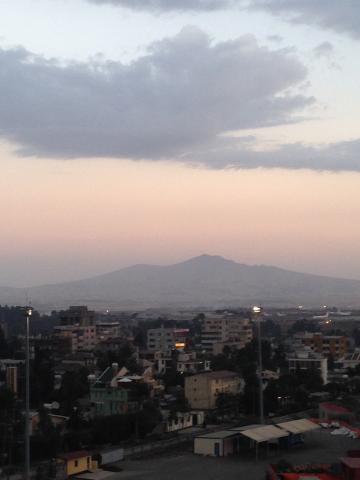 Kelly Kundrat, an intern with the Maryknoll Office for Global Concerns, attended the third annual Civil Society Forum on Sudan and South Sudan, held in Addis Ababa, Ethiopia in January 2014. Below is her report from this gathering.

“I am speaking on behalf of the entire South Sudanese women who are losing their husbands, sons, brothers, cousins,” Comrade Auilde’Chut Deng from South Sudanese Women for Peace Mission stated. “We are civil society and what we need is peace and to talk about the facts.”

Photo: The view of Addis Ababa.

Deng explained, from her prospective as a South Sudanese woman, that the South Sudanese conflict began on December 15, 2013, with a failed coup d’état. Invoking her viewpoint as a mother, she elaborated that, like establishing peace between your children, we must first ask, “Who started it?” and then explore the root cause, asking, “Why did you come to that as a solution to the problem you are in?” After determining which actor sparked the conflict, and delving into the main reason for this course of action, the road to peace and healing can begin, according to Deng. In response to claims that the South Sudanese conflict has taken an ethnic dimension, she stated, “They are all one family; we do not know who is Nuer or who is Dinka. We are all family in South Sudan.”

After the panel discussion, a commenter, Paleki Obur, disagreed that a coup d’état took place.

“There are no facts or evidence to prove that it was a coup attempt. If there are no established facts, we cannot go ahead and say that it was. There are different views on what happened on the 15th of December. We must not assume,” Ms. Obur declared.

The timely conference coincided with the South Sudanese peace talks with rebel leaders in Addis Ababa. Passionate presenters discussed current affairs, and ongoing human rights and humanitarian programs concurrently with the signing of the Cessation of Hostilities. The Government of the Republic of South Sudan and the Sudan People Liberation Movement/Army in Opposition signed this first official step in a ceasefire.

Beyond discussions of a ceasefire and peace building in South Sudan, social advocates discussed the ongoing violence in Darfur, Blue Nile, Nuba Mountains and South Kordofan. These regions continue to experience widespread and intense violence, as well as a lack of humanitarian aid and international attention. As voiced by a majority of the participants, the conflicts share one key accountable agent: President Omar al-Bashir of Sudan. Bashir has been indicted by the International Criminal Court for five counts of crimes against humanity, and two counts of war crimes. However, international organizations continue to involve Bashir in peace building negotiations. This fact sparked a debate on the morality of bringing the main perpetrator of war to the negotiation table.

“The history of the conflict is that it is against accountability for the perpetrators or justice for the victims… It is unethical and immoral for rebel movements to engage in a peace process with a genocidal government. It is as if we can take a rational approach with this genocidal government who were the perpetrators,” Prof. Mukesh Kapila stated. “I find this very disturbing.”

After other commenters voiced their concerns with the involvement of external nations in the conflicts, the panelists responded.

“Some say you cannot negotiate with Bashir,” Jerome Tubiana said, “Well, I say you have to. Whatever he has done, he has to be part of the solution.”

In juxtaposition, a participant shared, “The culprit cannot be the one who brings redemption.”

Panel discussions ranged from updates on current affairs, and the role of international organizations within the region. More active discursive activities took place in the form of civil society edits to the Cessation of Hostilities agreement. Before the document was signed by opposing forces in South Sudan, a small breakaway group met to suggest edits. After combing through the document, the participating advocates tweaked the language in order to reduce ambiguity and strengthen oversight.

The Forum culminated in rich intellectual discourse, recommendations for future advocacy work, and civil society resolutions as a pre-summit contribution to the 22nd Ordinary Session of the African Union (AU) Assembly of Heads of State and Government. These resolutions focused on 1) the situation in South Kordofan and the Blue Nile State; 2) the situation in Darfur; 3) the democratization of Sudan; 4) human rights and political freedoms in Sudan, 5) the ongoing conflict in South Sudan; 6) state-building and reconciliation in South Sudan; 7) the critical situation of women in Sudan and South Sudan; 8) refugees and internally displaced persons in Sudan and South Sudan; 9) press freedom in Sudan and South Sudan; 10) the role of UN in Sudan, South Sudan, and the disputed territory of Abyei; and 11) the current situation and recommendations from civil society. The conference concluded with promises to continue engagement between civil society groups, and to aid in the burgeoning programs to bring information and aid to the region.

Sudan and South Sudan continue to experience widespread violence. With continued international impunity and a lack of justice and accountability, the violence threatens never-ending existence. The passionate advocates present at the third annual civil society forum continue to fight for human dignity and peace for their loved ones.