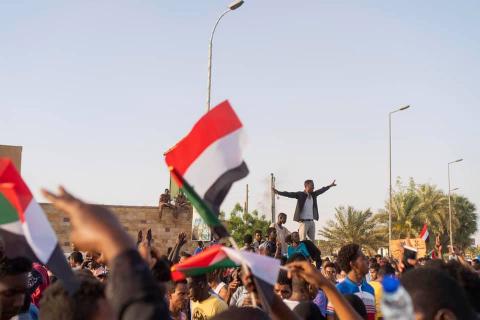 June 3 is the Feast of the Ugandan Martyrs, commemorating the execution of 45 young men for their faith in 1886. A similar massacre has again occurred on this day, this time in Sudan. The following article was published in the July-August 2019 issue of NewsNotes.

On this past June 3 in Sudan, peaceful protestors who had managed to bring down one of Africa’s most brutal dictators, Omar al-Bashir, and had returned to the streets to call for a civilian-led government, were violently attacked by paramilitary forces outside the military headquarters in the capital city of Khartoum. The Transitional Military Council (TMC) has refused to identify the perpetrators who used live ammunition, water cannons and tear gas to drive the demonstrators away, but it has acknowledged that 61 people were killed and hundreds injured. At least 40 bodies were found floating in the Nile river.

The TMC acknowledged ordering the dispersal but claims the violence was not caused by its security forces and was a ‘mistake.’ Eyewitnesses told the press that scores of women and men were sexually assaulted in the attack, with Southern Sudanese and people from Darfur specifically targeted by the perpetrators.

In May, the Maryknoll Office of Global Concerns, aware the nonviolent demonstrators were not receiving the needed international support, sent letters to U.S. Rep. Chris Smith (R-NJ) and Rep. Jim McGovern (D-MA) of the Tom Lantos Human Rights Commission asking them to exert maximum pressure on the Sudanese military to allow a civilian-led democratic government.

Shortly after, a bipartisan, bicameral letter was written by Rep. McGovern, signed by three additional Members of the House and nine Senators, and addressed to Secretary of State Mike Pompeo and Secretary of the Treasury Steven Mnuchin. The letter outlined practical steps the United States should take to support the protesters in their push for a free and democratic civilian government in Sudan – namely, refuse to recognize the legitimacy of a military-led government.

Immediately after the massacre on June 3, international condemnation proceeded from the Secretary General of the UN, the UN Commissioner for Human Rights, the UK Foreign Minister, the British Ambassador to Sudan, the U.S. Embassy in Khartoum and the EU. Within days, the African Union suspended Sudan from its membership. The AU’s requirement for a civilian interim government in Sudan by June 30 still stands. On June 9, Pope Francis called for peace and dialogue in Sudan in his weekly address to crowds in St Peter’s Square in Rome.

The pro-democracy protestors responded to the massacre by calling on all citizens of Sudan to join in mass civil disobedience. This was called off when Ethiopian Prime Minister Abiy Ahmed arrived on June 7 to lead mediation talks. Protesters continued to live in fear for their lives as the Rapid Support Forces (RSF), formerly known as the Janjaweed in the Darfur atrocities, terrorized the center of Khartoum.

Protesters circumvented the government’s shutdown of the internet by using the hashtag #BlueForSudan on social media. On Instagram, U.S. celebrities such as Rihanna, Naomi Campbell and Ne Yo turned their profiles blue to raise awareness and express solidarity with the protesters’ chants of “silmiyah,” which means “peaceful” in Arabic.

The United States has been accused of indifference toward suffering and injustice in Sudan now and in the past. In 2005, the Bush administration, concerned with fighting terrorism, partnered with the Sudanese intelligence chief, Salah Gosh, who allegedly oversaw massacres in Darfur of over 300,000 people. Gosh has disappeared from military leadership but former Janjaweed commander General Mohamed Hamdan Dagalo, known as Hemedti, has taken his place and is posturing to become the next Sudanese president. To date, there is no justice for the atrocities committed in Darfur.

On June 23 the protestors accepted an Ethiopian-led road map to a civilian government with a leadership council consisting of eight civilian and seven military members. The military will chair the council for the first 18 months and civilians for the next 18 months. When the military rejected the proposal, the protesters called for mass demonstrations on June 30, the 30th anniversary of the coup that brought deposed dictator Omar al-Bashir to power.

Hundreds of thousands of people took to the streets of Khartoum, Obdurman, Atbara and other cities across Sudan on June 30. Security forces used tear gas to disperse them. Local news agencies reported five people were killed and 181 injured.

The peaceful protestors need the international community to refuse to recognize legitimacy of the Transitional Military Council, demand accountability for the crimes committed, and direct all support to civil society and peaceful protesters. The bravery of the Sudanese protesters should be matched by honesty and boldness by the international community in confronting the TMC.