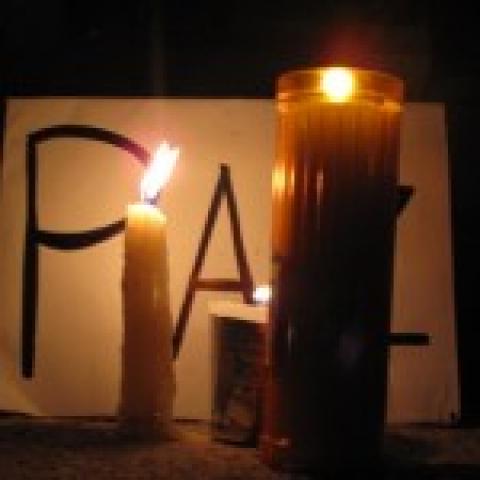 Written by Lisa Haugaard and Jenny Johnson of the Latin America Working Group (LAWG) and published on the Huffington Post.

January 15, 2013 -- As we continue our national conversation about gun violence in the aftermath of the Newtown elementary school shootings, let's also consider a plea from our neighbors in Mexico. One hundred thousand people -- yes, 100,000 people -- have been killed in the violence that has devastated Mexico in the last six years. Twenty-five thousand people have disappeared. Seven thousand bodies lie unidentified in morgues.

This week, a petition initiated by groups from Mexico's Movement for Peace with Justice and Dignity in partnership with dozens of faith-based, human rights and anti-gun violence groups from both sides of the border is being delivered to Vice President Biden's task force on gun violence, urging the president to take concrete action to halt the flow of assault weapons into Mexico.

In recent years, a remarkable civil society movement has emerged in Mexico, composed of the families of victims fed up not only with the brutal cartel violence but also with cold-hearted, short-sighted government tactics that escalate the violence and treat victims as criminals deserving of their fate.

This Movement for Peace with Justice and Dignity has called for action in Mexico, but also calls on all of us in the United States to change the U.S. policies that fuel the violence that has robbed them of their sons and daughters. They ask us to reconsider the failed, militarized approach towards drugs; to enact comprehensive immigration reform; to end military aid to Mexico; and to combat money laundering that channels billions in profit to cartels. We should act on all of these just demands.

But one item at the top of their agenda is action to stop the flow of firearms into Mexico. When over a hundred victims of violence and advocates from Mexico traveled thousands of miles across the United States this summer to mobilize U.S. public support for change, we heard this message loud and clear. "Enforce the laws to stop gun trafficking," said one young man from Ciudad Juárez, who had five family members murdered and whose entire extended family had to flee. "Arms from the United States," he said, "are arming the cartels."

And he is right. According to the Bureau of Alcohol, Tobacco, Firearms, and Explosives, 70 percent of the guns which are seized and submitted for tracing in Mexico originally came from the United States. The Violence Policy Center reports that many of these seized firearms are bought by "straw purchasers," individuals with clean records who purchase firearms and then resell them to traffickers or at gun shows where background checks aren't required to purchase a firearm.

This is why victims and civil society groups from both sides of the border have called on President Obama to better enforce and tighten lax U.S. gun laws that traffickers exploit to get guns and smuggle them into Mexico. A petition signed by close to 55,000 people is being presented this week to Vice President Biden's gun violence task force calling on President Obama to take concrete steps to halt gun trafficking into Mexico.

This petition, initiated by organizations in Mexico and sponsored by a coalition of human rights, anti-gun violence, and faith-based organizations, including the Mexican Movement for Peace with Justice and Dignity, Propuesta Cívica, Brady Center to Prevent Gun Violence, Latin America Working Group, Washington Office on Latin America, Cuéntame, Global Exchange and the Violence Policy Center, calls for President Obama to:

In addition to these steps, the Brady Campaign released a fuller set of recommendations to support law enforcement agencies by giving them the tools to crack down on gun trafficking and prevent straw purchases. The Washington Office on Latin America is calling for the creation of a bi-national commission that would work on both sides of the border to staunch gun trafficking.

As Vice President Biden's task force releases its recommendations, we hope that President Obama will remember the voices of victims that remind us of the brutal toll gun violence takes on communities on bot sides of the border. Just as we heard the victims from Mexico say in the halls of the U.S. Congress this fall, we want President Obama to remember, "Our loved ones have names, they have mothers and fathers. They are not collateral damage." Along with the families of Newtown, Conn., they deserve justice -- and change.