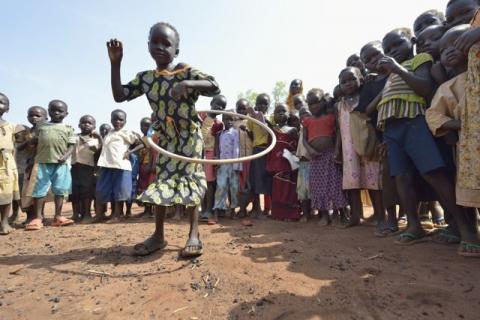 The following reflection was written in early April by Br. Bill Firman, an Australian De La Salle brother and friend of Maryknoll who works in Juba, and published in the May-June 2014 NewsNotes. As his on-the-ground account reveals, the situation in the South Sudan has gone from bad to worse. Secretary of State John Kerry’s visit to the regional peace talks in Ethiopia underscores the growing concern in the U.S. administration that unless immediate actions are taken, widespread famine could break out. Kerry indicated that the U.S. and East African nations are committed to deploying a predominantly African military force in South Sudan, where there are already 9,000 UN peacekeeping forces. Kerry also warned of a possible genocide if the fighting was not stopped.

[Br. Bill writes:] The conflict in South Sudan grinds on pointlessly ... I don’t know why but the words of philosopher and novelist, Albert Camus, come to mind: "What doesn’t kill me, makes me stronger." Yes, adversity can make survivors stronger and better able to cope with subsequent difficulties but that is not much consolation for those who are killed. The soil of South Sudan is soaked with the blood of too many people. The philosophy of Camus is often labeled as "absurdism." The conflict in South Sudan is absurd and irrational. The country has become weaker even as we hope some stronger leaders will emerge.

Camus also said, "We turn toward God only to obtain the impossible." Perhaps, but this Holy Week reminds us that God can make the impossible, possible, that the resurrection of Jesus followed his suffering. [In his message, Br. Bill shared some photos taken recently by Paul Jeffrey, a photojournalist. See one example on this page.] Some of his photos reveal the dreadful conditions in which many displaced people in South Sudan find themselves: the makeshift shelters, the mud, the dangers of unexploded ordinance, the suffering. Other photos, however, reveal indomitable spirit, the joyful attitude of children and the consolation flowing from strong family relationships.

It is hard to know what is really happening in South Sudan. It seems absurd that again renewed fighting is reported in Malakal and Bentiu. South Sudanese soldiers must be asking in the words of the song from the Vietnam war era: "What are we fighting for?"

[Br. Bill also attached two articles that give insight into the way people in South Sudan are suffering.] One article shows the student perspective: "A student in the Faculty of Veterinary Medicine at Malakal Campus, now stranded in Juba, Chirillo Kuony Ayok said: ‘The looting and destruction of the university’s facility and properties is lamentable and being condemned by all students of Upper Nile University…. [This] is not an isolated institution to one community in South Sudan but it rather belongs to all the tribes and nationals. It should not be targeted for lootings. It is an institution belonging to all and for the development of all.’ Upper Nile University has been subjected to destruction since the internal armed conflict erupted in mid-December between loyalists of Dr. Riek Machar and President Salva Kiir."

The other article gives some insight into the challenges faced by the many [NGO] workers heroically trying the assist the people of South Sudan: "It is not the first time that medical care has come under fire in the world’s youngest nation since the crisis erupted in mid-December. In Leer, Unity state, [a team from Doctors Without Borders (MSF, its French acronym)] returned to the hospital to find it had been thoroughly looted, vandalised and then burned. MSF’s compound in Bentiu, also in Unity state, was looted, too. These attacks took place amid a wave of violence which saw hospitals targeted, as well as markets, public spaces and sometimes entire towns." [Read original MSF report.]

In this Easter season, we pray that the two principal leaders in South Sudan, who are both Christian, are moved to "obtain the impossible," to do whatever is necessary to end this absurd fighting and to bring peace back to the troubled land of South Sudan.