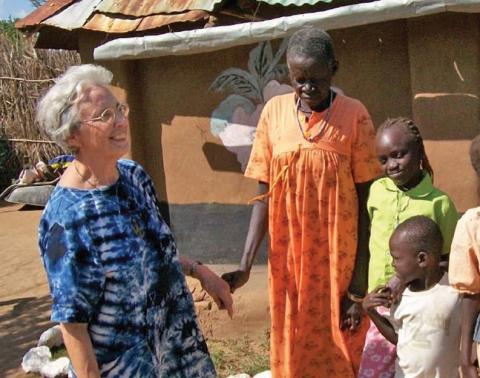 For the first time in six years, the United Nations has declared that a situation of famine exists on the continent of Africa. The following article was published in the May-June 2017 issue of NewsNotes.

By early February the population of two counties of South Sudan had reached a level 5 on the Integrated Food Security Phase Classification (IPC), a scientific measurement of determining levels of food insecurity.  Declarations of famine are more than just statistical measurement. They are political acts intended to spur rapid responses to the threat of human starvation.

In recent months advocacy organizations and international humanitarian agencies have begun to lobby the U.S. government to respond and have debated a wide range of actions that should be taken toward the dire situation in South Sudan.

South Sudan’s plight may soon be matched by three other places: Yemen, Somalia, and Nigeria’s northeast region. Because all four of these emergencies are taking place amid situations of severe, violent conflicts, some advocates of humanitarian assistance have begun to use the term “man-made famine” in order to draw a  connection between violent conflict and hunger. For example, Simon O’Connell of Mercy Corps stated recently that “only if we understand conflict can we understand hunger.”

In testimony before the House Foreign Affairs Sub-Committee on Africa Matt Nims, Acting Director of USAID’S  Office of Food for Peace, Bureau for Democracy, Conflict, and Humanitarian Assistance, claimed that there has been a “remarkable shift in the drivers of humanitarian crisis over the past decade. Ten years ago, conflict caused just twenty percent of emergencies. Today that number is eighty percent according to the U.N.”

As warnings about impending famines and calls for increased food aid grow louder, an all-too-familiar scenario is emerging in the media that omits many important aspects of what takes place when humans experience famine.

Too often the media’s description of those enduring the burden of famine’s bite is one of helpless, starving individuals whose plight can only be alleviated by the interventions of global humanitarian organizations. They depict disaster relief specialists ready to combat the roadblocks set up by venial government leaders who themselves are the cause of the conflicts that engender famine.

But as anyone who has worked with people in situations of extreme food shortages knows, hungry people themselves take decisive and courageous action when they are threatened by famine. They adjust their life-style by cutting down on food consumption. They search for alternative sources of income and often share what little they have with those less fortunate.

When all else fails, those facing famine often undertake long migrations in the search for food and security. As weather and security conditions improve, they exhibit an amazing resilience as they plant crops and reconstruct their broken lives.

Despite the resilience of people in South Sudan, prolonged military conflicts have led to such a truly precarious situation that 1.77 million people have fled as refugees into neighboring countries and 1.9 million remain as internally displaced people. Five million South Sudanese are considered to be in a state of crisis and at least 100,000 are already living in famine. These deadly conditions call for a further shift in the lens of how we understand and respond to the challenge of famine.

At a recent Africa Policy Forum sponsored by members of Congress, expert panelists put forth widely differing responses to the crisis in South Sudan. Jon Brouse of the World Food Program reiterated the famine and conflict link when he noted that while drought disrupts productivity, conflict disrupts everything, including the intervention of humanitarian aid organizations.

John Prendergast of the Enough Project questioned whether, in conflicts like those raging in South Sudan, humanitarian aid is the sole response required. If famine is man-made and if the men making the famine are doing so by waging war, then a peace strategy needs to be put in place that gets at the core vulnerability of those waging war. In the case of South Sudan, this means finding ways to close off the transfer of looted financial assets as well as oil and gold by those currently in the seats of power.

In the midst of these conflict-related famines, there are hopeful grassroots approaches aimed at building peace and resolving the underlying cause of hunger. The South Sudan Council of Churches (SSCC), through its Action Plan for Peace, is laying the foundations for a national peace process. The impacts of the council’s efforts at the local level are already apparent.