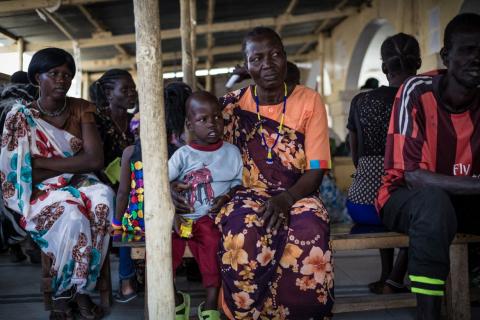 In February I traveled to Juba, the capitol of South Sudan, to visit Maryknoll Lay Missioner Gabe Hurrish, who works at an organization called Solidarity with South Sudan. I had worked in South Sudan in disease eradication before I joined Maryknoll, and Maryknoll missioners have worked there for years.

While I was visiting, we spoke with a graduate of Solidarity’s Teacher Training program who is now teaching at a school outside of Juba in a “Protection of Civilians” (POC) camp, a place where internally displaced people are offered protection by the UN. Remarking on the ongoing peace negotiations in South Sudan, the teacher shared, “We all want peace. But we are at the mercy of the leaders. The two [main] leaders and others just don’t like each other. They don’t listen to the heart of the people. We feel there is more hope now than before. We appreciate international people obliging the leaders to discuss peace. Life in the POC is terrible. We can do nothing. We can’t improve our lives. There are no jobs.”

There's a saying in East Africa that “when elephants fight the grass gets trampled.” Violent conflict in Sudan and South Sudan has wreaked havoc on the population on and off for decades. If the elephants are the leaders and the grass is the people, in the complexity of the conflict it is often hard to tell where the grass ends and the elephants begin.

On February 20, President Salva Kiir and his vice president, Riek Machar, who leads the main opposition group, finally started implementation of a unity government in accordance with a deadline set under the peace accord, which ended the devastating civil war in 2018. This was an important step, finally achieved after numerous delays and setbacks in the peace negotiations. Various international actors, including the United States, are supporting the agreement. As the teacher we met mentioned, it has often seemed like the leaders have been “obliged into” the agreements by these external actors.

What does forming a "unity" goverment mean for the day-to-day lives of South Sudanese people? Because the conflicting leaders are from different ethinc groups, their constituencies were mobilized along ethnic lines during the war. In forming a unity government, people who were marginalized or targeted during the civil war, as well as members of active opposition groups, are asked to come to the same table for negotiations and to share offices, military posts, and neighborhoods. Given the trauma that people from all levels of society have experienced, this is a tall order. When I worked in Juba in 2016, the organization I worked for was associated with a government ministry. Even the top government minister that we worked with, who was from a targeted ethnic group, fled to a nearby POC, fearing for his life. Large numbers of refugees who fled the civil war are trying to reintegrate into society, although they may have grown up outside of South Sudan. Many people lost land and valuable resources, such as herds of cattle, during the war. Ultimately, the tenability of long-term peace rests on how well people can reintegrate into society and the willingness of aggressors to accommodate those returning. After so many cycles of violence, will the aggrieved be able to forgive their oppressors? The churches in South Sudan are begging for these reconciliations and they know that peace is dependent on them.

While the greed of Kiir and Machar and tribalism are often blamed for the persistent violence in the country, there are also external interests at work behind the scenes. The Somali poet Ali Dhuh once said something to the effect, “the genius of whites is that they can both cause a conflict and then come in to broker peace.” Again, in this case it is difficult to say exactly who the “whites” are in this situation. Suffice it to say that the same neighboring regional countries and global powers that vie for the upper hand in this strategic and resource-rich region of the world are the parties trying to broker peace in the country and offering aid to the people of South Sudan.

In the optimistic time in which South Sudan achieved independence from the North in 2011, one of the first major infrastructure plans proposed was a pipeline from the oil fields in northern South Sudan to Lamu, on the Kenyan coast. The proposed pipeline would benefit Kenya and allow South Sudan to sell oil to the United States. Currently South Sudan is only able to export oil by means of a pipeline ending in Sudan, and Sudan is barred from selling oil to the United States due to its inclusion on a list of “state sponsors of terrorism.” Other countries, especially China, which invested heavily in the existing pipeline, continue to buy South Sudanese oil from Sudan. So it seems that there may be bigger “elephants” fighting over power and resources than Kiir and Machar, and also bigger than the leaders in the neighboring countries. In trying to convince the leadership in South Sudan to come to peaceful terms and usher in a stable peace for the population, those brokering the peace are treating the symptoms rather than the causes of the conflict. The international powers need to be held accountable for their efforts to control power and resources without regard for the local people.

Gabe noted, “Despite the emotional trauma of losing loved ones to senseless acts of violence, the people of this country carry on. They are sad, frustrated, angry and even vengeful but they carry on. They do what they have to do to support their families. It is this spirit which I feel as I meet them and share their stories.”

As I was leaving, Gabe lent me a book about the life of South Sudanese Bishop Emeritus Paride Taban, the founder of Peace Village, a place where people of diverse ethnic groups live together. To close, I’d like to share a quote from him that I feel expresses the spirit of mission: “If there is any message I have continuously tried to pass on to others, this has always been the one of peace and love. I see myself as a bee; my task is to sting around, not with the intention of causing harm but of awakening people and transforming lives.”