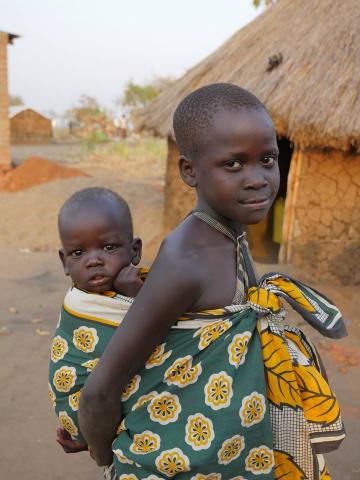 Amid a humanitarian catastrophe the parties to the internecine conflict in South Sudan surprised many international observers when they signed a permanent ceasefire agreement in Addis Ababa, Ethiopia on June 27. Whether this ceasefire will hold is anyone’s guess. What we do know is the humanitarian crisis continues. The following article was published in the July-August 2018 issue of NewsNotes.

The number of refugees from South Sudan’s five-year civil war has now reached 2.5 million people, with another two million living in camps for the internally displaced, according to Fr. Michael Bassano, a Maryknoll missioner working in a camp for internally displaced persons (IDP) outside the city of Malakal in the northern part of South Sudan. Refugees from South Sudan have gone to the Gambela Region of Ethiopia, to Sudan (primarily to a city called Kosti, about 100 miles to the north along the Nile River), to Kenya and to northern Uganda, where a series of camps now accommodate 1.5 million South Sudanese. Two Maryknoll missioners, Fathers John Barth and Dave Schwinghamer, are working with Salesian missionaries in camps in Uganda.

Fr. Bassano says that the two primary forces driving people to flee their homes are lack of food and insecurity. Of the 8.5 million people still living in South Sudan (out of a previous total of 11 million), 48 percent are food insecure, according to the United Nations Office for the Coordination of Human Affairs.

Father Bassano added that although there is no official fighting taking place right now there are constant skirmishes when opposition fighters chance upon government soldiers. People also fear crossing paths with government soldiers if they venture any distance from their homes or the IDP camps, as the soldiers have been known to be abusive, especially to women.

The United Nations World Food Program provides food to the people in the camps. This was supplemented in the camp in Malakal in January and February this year by relief aid from the Maryknoll Fathers and Brothers, which enabled Father Bassano to buy 2,000 bags of rice, which he distributed to 4,000 people.  One South Sudanese woman told Father Bassano: “Please tell the American people how grateful I am; this is the first time in three years that I have been able to eat rice.” The Maryknoll Fathers and Brothers also provided aid to the camps in northern Uganda where Fathers Barth and Schwinghamer work.

The two main ethnic groups involved in the civil war are Dinka, whose leader is President Salva Kiir, and Nuer, led by former Vice-President Riek Machar. In December 2017, a ceasefire was signed by both sides in Addis Ababa creating a lull in organized warfare, but skirmishes still broke out. Since then there have been intense negotiations, but both sides resisted a peace agreement. Overseeing the peace negotiations are the Intergovernmental Authority on Development (IGAD), which comprises eight countries of eastern Africa, and three external countries (United States, United Kingdom, and Norway) called the TROIKA. One stipulation of the government was that Machar be removed as Vice-President and not be allowed back in the country. In his place, Taban Deng, a Nuer, was made Vice-President, but Machar rejects him, claiming he supports the Dinka-led government.

After a high-level meeting in late May again produced no agreement, the Troika gave both leaders until June 30 to come up with a ceasefire or face international sanctions. The international participants observed that top political and military officials of the government were sabotaging the peace negotiations and blocking humanitarian assistance to civilians.

On June 13 Machar accepted an invitation from Ethiopian Prime Minister Ably Ahmed to attend talks with President Kiir in Addis Ababa on June 20. This was the first time that Kiir and Machar had met since a peace deal between the government and Machar’s rebel group fell apart in 2016. Unfortunately, these talks also proved unfruitful but Sudan’s president, Omar al-Bashir, called them to Khartoum on June 27, where Kiir and Machar signed an ceasefire agreement. The Al Jazeera news network reported that the agreement will install a transitional period of 36 months and a ceasefire mechanism that will include troops from the European Union and IGAD. It also calls for opening corridors for humanitarian aid, release of prisoners and withdrawal of forces.

Sudan has also agreed to rehabilitate oil production facilities and export oil via Sudan, perhaps the crucial ingredient in forging a peace agreement. Production had declined by close to one-half and the government was using oil revenues to buy military equipment while basic needs were being ignored.

Meanwhile, the UN’s Office of Civil Affairs is conducting workshops for as many people as possible, assisted by church staff, to create a over-arching South Sudanese nationality that subsumes ethnic identities. Bassano tells of one eleven-year-old boy of Nuer ethnicity who likes to sing a song he learned in church that ends with a crucial verse in English: “We are the one family of God.” Bassano hopes that if Christians sing this song often enough they might come to believe it.

Photo: South Sudanese refugee children in Uganda, one of the top-refugee hosting countries. Photo courtesy of Maryknoll Fathers and Brothers.