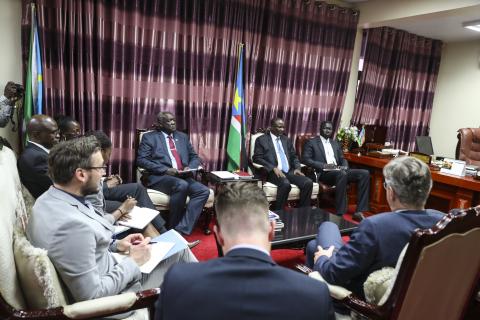 South Sudan's government and the Opposition Movement Alliance announce their intention to sign a ceasefire agreement reached thanks to international mediation efforts. This article was published in the November-December 2020 issue of NewsNotes.

The Rome-based Community of Saint Egidio mediated a breakthrough in talks between South Sudan’s government and the Opposition Movement Alliance who have agreed to a ceasefire and to pursue dialogue toward a peace accord in the world’s youngest nation. While the exact details of the ceasefire are not known, the Saint Egidio Community told Vatican News that it is organizing meetings between military and political representatives of both sides to establish mechanisms to monitor ceasefire violations.

The meetings are scheduled to take place in Rome, in two stages. The first encounter will be a workshop for military representatives from November 9 to 12. The second encounter will be a dialogue on November 30 aimed at producing a declaration of political principles. The negotiators from the government and the opposition alliance will need to reach an agreement on such contentious issues as federalism, the constitution, security, land allocation and reconciliation.

Maryknoll missioners in South Sudan tell us that many people there are skeptical of the ceasefire’s long-term success. Corruption, hunger and severe flooding have weakened the young nation at the very moment it needs to build a solid foundation.

In September, the UN Commission on Human Rights in South Sudan released a report that details the theft of “a staggering $36 million” in public funds since 2016 by high-ranking politicians and bureaucrats, often in plain sight of international corporations and banks which choose to remain silent. “It is worth noting this is just what we were able to trace and may not reflect the whole picture,” said Commission Chair Yasmin Sooka in a statement to the Human Rights Council on Sept.23.

“South Sudan is a country where lives are being destroyed by financial corruption on an epic scale,” Chairwoman Sooka said. “Looting and pillage aren’t just offshoots of war – they are arguably the main drivers of the conflict. At one end of the spectrum, South Sudan’s political elites are fighting for control of the country’s oil and mineral resources, in the process stealing their people’s future. At the other, the soldiers in this conflict over resources are offered the chance to abduct and rape women in lieu of salaries. The eight-year-old girl gang raped in front of her parents is the collateral damage.”

At the same time, more than half of the nearly 11 million people of South Sudan regularly go hungry and flooding has devastated parts of the country since July, according to UN estimates. The World Food Program blames the flooding on months of torrential rains that caused the Nile to burst its bank.

The Vatican’s pursuit of dialogue and peace in this suffering place is a leading example of the Church’s response to the pope’s call for us all to be missionary disciples.