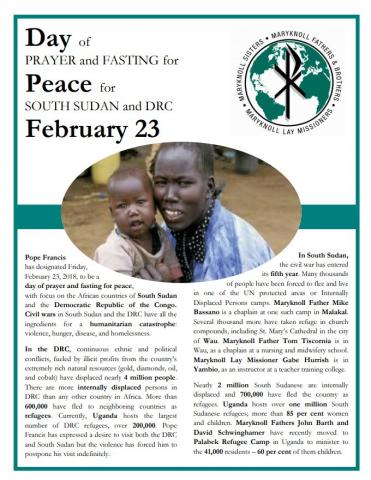 Pope Francis designated the First Friday of Lent, February 23, to be a day of prayer and fasting for peace for South Sudan and the Democratic Republic of the Congo. The following article was published in the March-April 2018 issue of NewsNotes

Overwhelming violence and political turmoil in South Sudan and the Democratic Republic of Congo have all the ingredients for a humanitarian catastrophe: violence, hunger, disease, and homelessness. In response, Pope Francis invited all people of faith to observe a day of prayer and fasting for peace dedicated to the two African countries on February 23.

In the DRC, continuous ethnic and political conflicts, fueled by illicit profits from the country’s extremely rich natural resources (gold, diamonds, oil, and cobalt) have displaced nearly 4 million people. There are more internally displaced persons in DRC than any other country in Africa.

More than 600,000 people have fled South Sudan and have gone neighboring countries as refugees. Currently, Uganda hosts the largest number of DRC refugees, over 200,000. Pope Francis has expressed a desire to visit both the DRC and South Sudan but the violence has forced him to postpone his visit indefinitely.

In South Sudan, the civil war has entered its fifth year. Many thousands of people have been forced to flee and live in one of the UN protected areas or Internally Displaced Persons camps. Maryknoll Father Mike Bassano is a chaplain at one such camp in Malakal. Several thousand more have taken refuge in church compounds, including St. Mary’s Cathedral in the city of Wau. Maryknoll Father Tom Tiscornia is in Wau, as a chaplain at a nursing and midwifery school. Maryknoll Lay Missioner Gabe Hurrish is in Yambio, as an instructor at a teacher training college.

Nearly 2 million South Sudanese are internally displaced and 700,000 have fled the country as refugees. Uganda hosts over one million South Sudanese refugees; more than 85 per cent women and children. Maryknoll Fathers John Barth and David Schwinghamer have recently moved to Palabek Refugee Camp in Uganda to minister to the 41,000 residents – 60 per cent of them children.

On November 23, 2017, Pope Francis offered this prayer for peace in South Sudan and in the DRC:

May the risen Lord break down the walls of hostility that today divide brothers and sisters, especially in South Sudan and the Democratic Republic of Congo.

May he comfort those women who are the victims of violence in war zones and throughout the world.

May he protect children who suffer from conflicts in which they have no part, but which rob them of their childhood and at times of life itself. How hypocritical it is to deny the mass murder of women and children! Here war shows its most horrid face.

May the Lord help all the little ones and the poor of our world to continue to believe and trust that the kingdom of God is at hand, in our midst, and is “justice, peace and joy in the Holy Spirit” (Rom 14:17). May he sustain all those who day by day strive to combat evil with good, and with words and deeds of fraternity, respect, encounter and solidarity.

May the Lord strengthen in government officials and all leaders a spirit which is noble, upright, steadfast and courageous in seeking peace through dialogue and negotiation.

May the Lord enable all of us to be peacemakers wherever we find ourselves, in our families, in school, at work, in the community, in every setting. “Let us wash the feet” of one another, in imitation of our Master and Lord. To him be glory and praise, now and forever. Amen.

“Solidarity Teacher Training College is run by a group of international religious from various congregations and institutes. Our college has 15 tutors from 9 different countries. There are 125 students from all over the nation and a few from Sudan in the north. The compound has classrooms, a library, a computer room, dorms for women and men, a cafeteria and several warehouses. The religious staff has its own house and everyone has their own room.” Read more at http://bit.ly/2BDZTB0

“The settlement population at Palabek Refugee Camp rises weekly. We are now up to 41,000 people – 60 percent of them school-age children. Our top priority is to build and staff primary and secondary schools for these children. Maryknoll is teaming up with Salesian missionaries to provide four nursery schools to enroll 200 each. Most of the teachers have been hired in the camp itself with others coming from the Ugandans living nearby. Today the school doors opened (actually there are no doors yet, just a roof and brick pillars.) Maryknoll is supplying uniforms, school supplies and porridge each day for the next year.” Read more at http://bit.ly/JohnBarth