South Sudan: Concerns about peace accord 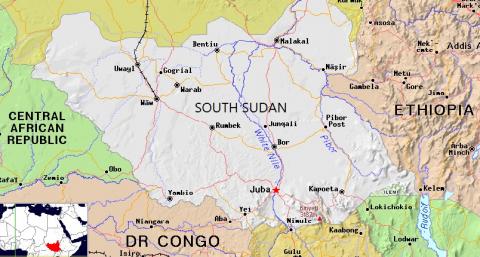 The future of the young nation’s peace agreement, signed last year to end a five-year civil war, is unclear. The following article was published in the March-April 2019 issue of NewsNotes.

The bishops of the Catholic Church in South Sudan said in a statement on February 28 that, while they welcomed the five-month-old peace agreement as a step forward, "the concrete situation on the ground demonstrates that it is not addressing the root causes of the conflict in South Sudan.''

Root causes of the war that need to be addressed

Corruption: Income from oil ($500 million per month) constituted 98 percent of the revenue at the time of independence in 2011. As these funds were diverted, allegedly to increase the personal wealth of government officials and their allies, state revenues shrank, and members of the opposition were sidelined and excluded. In 2013 Vice President Machar publicly accused the president of corruption, tribalism, insecurity, a poor economy, poor foreign relations and the movement’s loss of direction. Several days later, he and the rest of the cabinet were dismissed from their government positions. Peace will require giving the opposition a share in governance and income from oil.

Violence and negative ethnicity: Conflict between farmers and powerful ranchers in the southern part of the country has caused a large movement of refugees to Uganda. Multi-ethnic cities like Yei, Yambio and Wau have seen similar tensions with conflicts between the national army and local rural people. In some areas, renegade soldiers have been restrained but no justice has been meted out to perpetrators of murder, rape, torture and looting of property and land.

Violence in Unity State: Fighting continues between the national army and the Nuer who are ethnically related to Vice President Machar. In November, Doctors Without Borders publicized a mass rape that occurred near Bentiu but the government continues to deny there is a problem.

What is needed for the agreement to succeed?

National and international agencies need to support ordinary people who must rebuild their own lives. This includes those who remain displaced both inside and outside South Sudan.

Opposition groups need to share in governance and income from oil revenues. In addition to followers of Machar, the National Salvation Front, comprising ‘non-signatory or hold out’ groups, insists on a national federal system which deserves consideration.

All ethnic groups need to participate equally in peace and development plans. The violence in Unity State needs special attention and action.

What is the reality on the ground?

People are very tired of war. However, they may be able to tolerate corruption for some time if violence decreases. Problems with corruption are not addressed in the peace agreement.

People in the capital city of Juba seem hopeful but not optimistic. They know that history is strewn with recurring failures. Most people who left Juba are waiting to see what happens and few have returned. Churches are constantly praying for the peace agreement to succeed.

Security has improved in recent months in Yambio, located on the southern border with the D. R. of Congo. The roads are safer and women and children are able to walk alone.

Security has also improved in Wau, a city in northwestern South Sudan. There have been no clashes outside the town for several months. Rebel leaders were cordially welcomed when they attended a recent official peace gatherings. The number of protected civilians in the UN camps has decreased from 40,000 in 2016 to 15,000. The number of people sheltering in church compounds has decreased from 20,000 to 4,000. People are returning home and preparing their fields for cultivation.

The 2013 peace agreement in Old Fangak continues to hold. People in the remote, northern community know peace is possible with good leadership.

Many rural people have lost everything and are malnourished. The fields will require extra work because they lay fallow for several years. People need to rebuild homes and procure seeds and tools. Previous donors are inclined to think the crisis will end soon when Juba appears quiet. Without their support food production will languish.

Meanwhile, ongoing daily protests over rising bread and fuel prices have been met with violence from masked security agents in Sudan. BBC Africa Eye has analyzed videos showing militia chasing, beating and dragging protestors to secret detention centers. Witnesses who say they have survived torture describe a holding facility known as “the fridge” where cold is used for torture. The outcome of the uprising in Sudan will certainly affect the success of the peace agreement in South Sudan. Some fear the worst is yet to come.