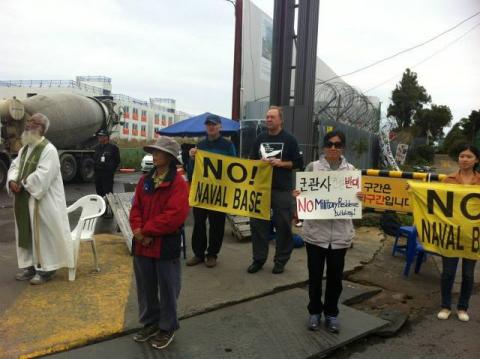 Maryknoll Affiliate Chris Smith contributed the following article which was published in the January-February 2015 NewsNotes.

In 2007 the South Korean government announced plans to build a 400,000 square meter naval base on Jeju Island to house a new destroyer fleet to patrol the East China Sea between China and Japan. Under the terms of the Mutual Defense Treaty and Status of Forces Agreement between the United States and South Korea, the U.S. military retains the right to use the base for operations in a regional conflict. The island is the site of a 450-year-old village that supports the livelihoods of 1,500 farmers and fishermen and has been designated a UN World Heritage site. The coral reef habitat is threatened by the construction impact. The population expressed its overwhelming opposition to the naval base in 2007 with a 94 percent no vote.

Despite popular objections to the government’s plans, construction has moved forward, even as villagers have documented environment damage. Over 50 farmers have cited damage to their crops, and water for drinking and farming has been contaminated by dust and oil generated by construction. The South Korean government has argued that the base will help promote tourism and bring jobs to the island, but ignores the fact that the most likely source of jobs will be bars, souvenir shops and brothels, hardly compatible with the farming and fishing backgrounds of the local population. The government maintains that the base will enhance security for the island. This argument fails to recognize the long history of conflict and tension that have plagued this part of East Asia; the island sits between South Korea and Japan and the Chinese coast is 300 miles away.

Recent activity on Jeju Island has underscored how strongly residents and activists from around the globe are determined to block the completion of the naval base. In October 2014, a Jeju Peace Festival was held that featured people from China, Japan and Korea to discuss various peace initiatives and how they can shape a "common future" for East Asia. Participants shared experience and reflected on similarities "in the movement against the bases in Okinawa and Jeju and in the growing concerns on environmental issues in China and Japan." (www.SaveJejuNow.org) An 86-year old Tacoma, WA priest, Rev. Bill Bichsel, was part of a U.S. delegation that joined Korean Catholic nuns and villagers in temporarily blocking cement trucks from entering the construction site. He reflected on the experience: "We get from them just a tremendous sense of faithfulness, living out what you believe, trying to stop the militarization." Bischel is no stranger to these types of demonstrations, having spent over 40 years working against U.S. military programs and weapons. The Catholic Bishops Conference of Korea has also weighed in on the naval base, supporting the demonstrators’ position against construction.

Local villagers and allies have focused on a demand to cut out the entire 2015 budget for the base, pointing out that construction of the base started without the agreement of villagers and is in violation of the conditions spelled out by the Korean National Assembly. The Korean Navy has modified its original plans for 690 units for military family housing within the village to 72 units amid protests by residents. The modification, however, was designed to secure the necessary building permits, evade required environmental impact assessments and avoid having to obtain the agreement of residents.

As the movement to stop the Jeju Island naval base enters its ninth year, the Ecumenical Working Group on Korea (along with other allied organizations) is planning to send a multi-faith peace delegation to North and South Korea in 2015. The new year will see a continuation of the movement to reclaim Jeju Island’s future for its inhabitants. Since 2010, over 450 activists and residents have been detained or arrested protesting the naval base.

The story of Jeju Island is hardly new – a small population’s interests and needs for a sustainable future are sacrificed for the interests of "national security" and the military. This flawed model reflects:

With continued mobilization of a broad –based opposition to the naval base plans in 2015, we can hope that the rights and interests of the local Jeju Island population will finally be recognized and respected.

For more background on the issues around Jeju Island, see NewsNotes from January-February 2013, May-June 2014 and the website SaveJejuNow.org.

This photo from the Save Jeju Now website includes a shot of our friend Art Laffin, a member of the Dorothy Day Catholic Worker community in Washington, D.C.; Art visited Jeju Island and participated in solidarity actions in the fall of 2014.