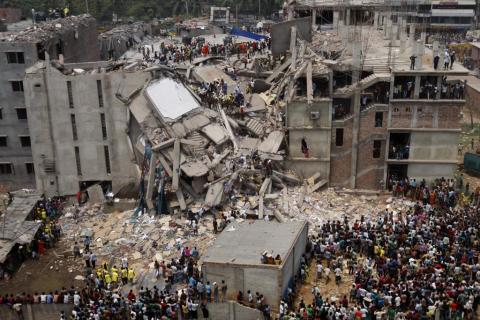 After the April 2013 collapse of Rana Plaza in Bangladesh (shown in photo), in which nearly 1,200 garment workers lost their lives, ICCR organized a coalition of over 200 institutional investors worldwide to promote reform of the global apparel sector to guarantee the safety and well-being of workers. In particular, the coalition calls for the support of the Rana Plaza Trust Fund, set up to help victims of the disaster, and for apparel companies to sign the Bangladesh Accord on Fire and Building Safety. Signers of the Accord make binding commitments to undertake the changes in the apparel supply chain needed to ensure worker safety.

This summer, ICCR Senior Program Director David Schilling attended the annual shareholder meeting of the apparel company Ralph Lauren and spoke at a rally prior to the meeting. What follows are his reflections on attending the meeting:

The responsibility of companies to respect and protect the rights of workers in their global apparel supply chains became the central theme of Ralph Lauren’s shareholder meeting on the morning of August 7, 2014 in New York City. … ICCR members supported a shareholder proposal sponsored by the AFL-CIO requesting that the company conduct a human rights risk assessment. The collapse of Rana Plaza in Dhaka precipitated the filing of the resolution when the management of Ralph Lauren refused to join the Bangladesh Accord on Fire and Building Safety, a legally binding agreement endorsed by over 180 global companies that seeks to implement systemic reforms in the Bangladeshi garment sector. Evidently, Ralph Lauren management feels they are doing enough on human rights issues and told their investors they prefer to "go it alone."

Nazma Aktar, a garment factory worker since the age of 11 and now leader of the Bangladeshi worker rights movement Awaj (which means "voice" in Bangla), made a heartfelt and eloquent presentation of the proposal to Mr. Lauren and the board. Nazma had worked at the Tazreen Fashions factory, where a November 2012 fire killed over 100 workers. She flew in from Bangladesh in order to give her testimony and to help raise awareness about the plight of apparel factory workers in low-cost countries like Bangladesh. Nazma helped put a face on the human risk Ralph Lauren was being asked to assess and to make real the importance of having workplace safety protocols in place wherever in the world the company is sourcing or manufacturing.

"Human rights risks for companies doing business in Bangladesh have become a central concern after the tragedy at Rana Plaza .... On that fateful day, 1,138 garment workers were killed and 2,515 more were injured," Nazma told the board of directors, senior management and shareholders of Ralph Lauren. "Before the collapse, many garment workers expressed concern that there were growing cracks in the walls. But they were told they must go back to work or they would not be paid for the month and would be fired."

Workplace safety is only one of the issues Bangladesh garment factory workers face – excessive hours, forced and bonded labor, slave wages, sexual harassment, denial of the right to freely associate and bargain collectively – these are everyday realities in global supply chains that the board members and management of every apparel company must acknowledge and commit to eradicate.

"In addition to what one company can do to protect human rights of workers, it is time to collaborate with other brands/retailers and stakeholders. A good example of an effective collaborative effort is the Bangladesh Accord on Fire and Building Safety made up of 180 companies and local and international unions. Is the company willing to join the Accord?" I asked.

There were signs of an opening but we will see…. We are hopeful that we will soon be able to report to Nazma that the long journey from Bangladesh and her tireless efforts on behalf of its garment workers were worth it. We are hopeful that Ralph Lauren will understand the life and death risks they run every day they don’t sign the Accord. And that Nazma’s personal testimony helped to remind them of their corporate responsibility to value their workers lives and well-being, before profits.