The Roots of Ethiopia's Tigray Conflict 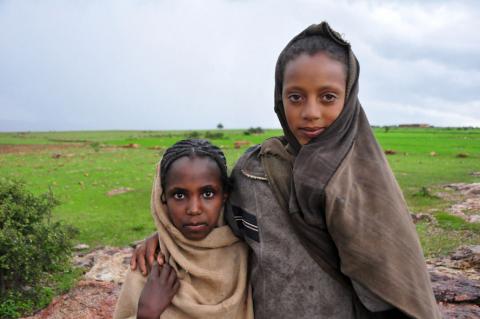 Maryknoll Fr. Frank Breen provides background on the deadly fighting that has gripped the northern part of Ethiopia since November 2020. This article was published in the January-February 2021 issue of NewsNotes.

The spark that lit the violent conflict in the northern Ethiopian state of Tigray on November 4 was the decision by the Tigray Peoples Liberation Front (TPLF) to hold elections in September, despite the order by Prime Minister Abiy Ahmed to postpone all elections to 2021 because of the COVID-19 pandemic.

This action angered the prime minister, who hails from the Oromo ethnic group of southern Ethiopia, the largest ethnic group in the country, comprising about 45 percent of the nation’s 111 million people. The Oromo have chafed at rule by other ethnic groups, first by the Amhara, the highest-educated and wealthiest ethnic group, and then by Tigrayans in a coalition government.

Since November, savage fighting in Tigray has resulted in countless deaths, massacres in several villages, the flight of at least 50,000 refugees to neighboring Sudan, and the involvement of the nation of Eritrea and Amhara ethnic militias. As of mid-December, Abiy has refused to accept the mediation of the African Union, instead seeking an outright military victory by government troops.

In the decades-long civil war that ended in 1991 with the ousting of longtime president Mengistu Haile Mariam, the TPLF and Eritreans led the battles, resulting in Eritrea’s secession from Ethiopia and de facto Tigrayan control of the Ethiopian government, led first by Prime Minister Meles Zenawi (1991 to 2012) and then after Zenawi’s death, by Hailemariam Desalegn Boshe (2012 to 2018).

Disgruntlement against Tigrayan rule incessantly grew as Tigrayans, only 6 percent of the country’s population, appropriated the majority of leadership positions and governed ruthlessly, imprisoning thousands of opponents while engaging in embezzlement and land-grabbing in and around the capital city of Addis Ababa, including the highly populous Oromo region, which is considered the homeland of the Oromo people.

Desalegn never proved to be an effective leader and, despite admirable economic growth since early this century, demonstrations broke out throughout the country in 2015, in particular in Oromia and Amhara, calling for political and economic reform and an end to state corruption. The protests were met with a brutal response; hundreds died and thousands of opposition supporters were put in detention. During this time, Tigrayan control of the governing coalition was declining while assertiveness by the Oromo People’s Democratic Organization was increasing.

In February 2018, Desalegn suddenly resigned and soon after the coalition chose Abiy Ahmed to be Prime Minister, after the Amhara candidate, Demeke Mekonnen, dropped out of the race and was given the post of Deputy Prime Minister. On April 2, 2018, Abiy, only 41 years old at the time, was sworn in.

Abiy was already very popular in Ethiopia, due to settling conflicts within Oromia and his campaign against land-grabbing near Addis Ababa. After being chosen Prime Minister, he embarked on ambitious programs of political and economic reforms, released almost all political prisoners, including some that Tigrayan leaders considered “terrorists,” promoted press freedom and additional television stations, and vigorously sought peaceful resolutions of conflicts in neighboring Sudan and South Sudan, as well as securing a permanent peace agreement with Eritrea after a twenty-year stalemate.

For these actions Abiy was awarded the Nobel Peace Prize in November 2019. A church-going Protestant, he hails from a Muslim-Orthodox family and is fluent in Oromo, Amharic, Tigrinya and English, in theory making him uniquely qualified to achieve national unity.

However, in the months preceding his award, Abiy exhibited signs of a more autocratic nature, holding few press conferences and answering no questions. Ethnic divisions revealed themselves that November, when Abiy united three of the four major ethnic-based political parties into one national party, the Prosperity Party, an action boycotted by the TPLF.

The governing coalition’s federalist system had given the nine ethnically based regions significant autonomy, including control over local taxes, education, and their own security forces. Then, in July 2020, the Abiy government responded ruthlessly to protests in Oromia over the assassination of Hachalu Hundessa, a popular Oromo singer, whose songs captured the sense of Oromo marginalization in the national economy. The government arrested over 5,000 people, many of them government officials.

Thus, the table was set for civil strife within Ethiopia when the state of Tigray went ahead with elections against Abiy’s order to postpone them.

As there has been a communications blackout, it is difficult to know the extent of the fighting, destruction, and loss of life in Tigray. In the final days of 2020, news reports of Eritrean troops invading refugee camps in Tigray heightened suspicions of collusion between the presidents of Ethiopia and Eritrea and deepened concerns of a growing war and humanitarian crisis for 2021.

Photo by Rod Waddington of children in Tigray, Ethiopia, available on Flickr.