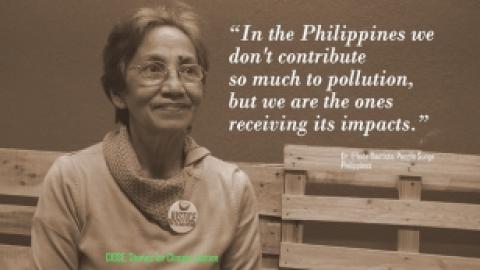 November 8 marks the second anniversary of Typhoon Haiyan, the strongest tropical cyclone ever recorded. It devastated portions of Southeast Asia. In the Philippines, more than 6,000 people died and 4.1 million people were displaced. Many of the approximately 16 million Filipinos living in extreme poverty were affected. The following article, from the November-December 2015 NewsNotes, was originally published by CIDSE as part of their video series “Stories for Climate Justice”.  It tells the story of Dr. Efleda Bautista, a climate activist in the Philippines. Dr. Bautista describes what climate justice means to her.

“At the sight of what climate extremes can bring on people, communities and countries, both mitigation and adaptation to the effects of climate change are essential pillars in the face of the upcoming COP21 Climate Negotiations.

“The Philippines is one of the countries most affected by natural disasters, particularly typhoons or super-storms. With an average of 20 typhoons each year, the archipelago has experienced an increase in the strength of such natural events.

“Although scientists ask for a careful analysis, many have noted that climate change has to a certain extent affected the ferocity and frequency of these storms, as warmer waters in the Pacific Ocean are observed to have a direct link. Typhoon Haiyan (also called Typhoon Yolanda), in 2013, was one of the strongest and deadliest storms ever recorded in this region, leaving more than 12 million people affected.

“In a country where about 75 percent of the people depend on agriculture to live, the consequences were devastating, as crops were destroyed and water resources contaminated. Dr. Efleda Bautista is a representative of ‘People Surge,’ a broad alliance of Typhoon Haiyan victims. It brings people together to help typhoon survivors, while empowering them to take collective action and reduce the risks of similar calamities in the future. The alliance also calls on the national government to take adequate and prompt measures to prevent, but also respond to the impacts of any natural disaster.

“In the context of this terrible event, Dr. Bautista highlights the contradictions that climate change exposes: how contradictory it is that many low income countries such as the Philippines feel the repercussions of climate change and pollution, despite being the ones that produce fewer emissions. It is a powerful example of the unequal relationship between high-income nations and low-income nations, and the urgent need to balance out this relationship if we are to achieve climate justice.

“She highlights that vulnerable people and communities must have an outstanding role in shaping the climate agreement in Paris, as she believes that solutions will not come easily from developed nations.

“As seen in this example from the Haiyan storm, extreme climate events can result in irreparable loss and damage, which often exceed the capability of people and communities to manage risk and repair the damages.

“In the upcoming UN Climate Negotiations in Paris, alongside the insistence on keeping temperatures under 1.5 degrees Celsius to prevent irreversible climate change, attention is also needed for both mitigation and adaptation measures, including the support of communities that will experience forced displacement due to the irreparable effects of climate change in their villages, cities, regions or countries.”

To watch a video of Dr. Bautista and see more articles and videos in the “CIDSE Stories for Climate Justice” series, go to http://www.cidse.org/articles/climate-justice/stories-for-climate-justic....