Rethinking Security in a Pandemic 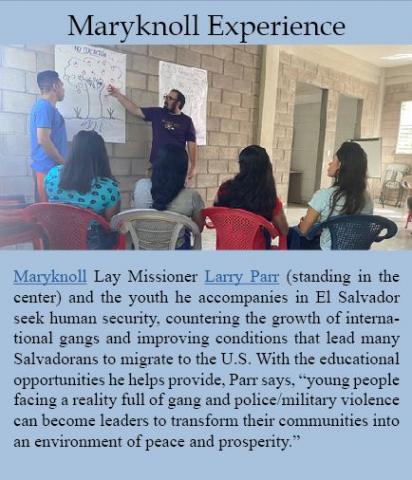 This is a version of the two-page brief on peacebuilding and security published as part of our election briefs series, Faithful Voting and Global Concerns. View the entire series of briefs here. The following article was published in the September-October 2020 issue of NewsNotes.

Recent global events call into question traditional approaches to security. A national security paradigm based on military defense cannot keep us safe from pandemics, food insecurity, or climate change. When communities in other countries suffer from these disasters, we feel the effects at home, too: COVID-19 continues to spread, migrants flee to our borders, violent conflict erupts over scarce resources, and the changing climate impacts us all. 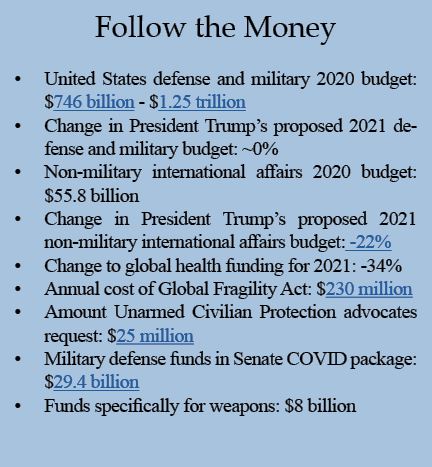 The novel coronavirus pandemic is a dramatic reminder that our own security is bound up with that of people in other countries and that promoting true security requires an integrated approach. Addressing the interrelated issues that threaten human security – from ethnic conflict to food insecurity, threats to health and to the environment, poverty and lack of essential freedoms – requires an approach that is integrated, proactive, cooperative, and nonviolent.

Through constant preparations for war, the national security model fails both by heightening tensions between nations and by draining resources that could otherwise be invested in more effective, nonviolent means of building just peace. The United Nations offers “human security” as an alternative model. But member states continue to employ a national security approach, leading to the “security dilemma,” by which one nation, attempting to increase its security by building up military defenses, prompts other countries to do the same, thereby making everyone less secure.

Meanwhile, research indicates what makes societies truly more secure. Societies that are more equal, free, and democratic are more resilient to both conflict and disaster. Addressing the root causes of conflict, such as fragility born of resource scarcity and extremism, can prevent violence and atrocities. Nonviolent tools, from multilateral diplomacy to unarmed civilian protection, effectively decrease violence. Peacebuilding is more effective and peace more durable when women are at the fore. Nonviolent social movements succeed more often than violent ones and bring about more durable change.

By contributing to these efforts around the world, and working with allies and global organizations to build trust and foster dialogue with adversaries, the United States can more effectively collaborate on global health and environmental efforts that make everyone more secure.

For decades, Church leaders have advocated for policies that promote nonviolence, dialogue, and cooperation over threats and violence, and directly link human security to development and mutual aid. Over fifty years ago, Pope Paul VI called for the establishment of a “world fund,” through which all countries would set aside a portion of their military budgets for impoverished countries to use toward their own socio-economic development. “Is it not plain to everyone,” he asked, “that such a fund would reduce the need for those other expenditures that are motivated by fear and stubborn pride?”

The prophet Isaiah’s proclamation, “Justice will bring about peace; right will produce calm and security” (Is.32:17), inspired Pope Paul VI’s famous rephrasing,“If you want peace, work for justice.” Indeed, he did not just connect the two realms, but equated them, calling development “the new name for Peace.” Catholic social teaching has since then built upon Paul VI’s insights, urging a positive, just peace approach that focuses on care for the common good and integrates social justice, ecological, and other security concerns.

Pope Francis follows previous popes in emphasizing the inseparable nature of peace, economics, and the environment, promoting “integral ecology” and “integral human development.” A Catholic approach to peacebuilding should reflect an integral security approach that builds on positive peace and human security models.

The Holy See puts these teachings into action through diplomacy aimed at “humanitarian and integral disarmament.” The Catholic Nonviolence Initiative, a project of Pax Christi International, works closely with the Vatican to promote a fuller understanding of nonviolence and just peace, particularly in the Church’s response the COVID-19 pandemic.

While most political leaders continue to think in terms of national security, we can seek policy commitments from candidates that move us toward integral security:

Come Holy Spirit,
that we might turn swords into plowshares
and spears into pruning hooks,
that nation not lift up sword against nation,
and that we train for war no more.
Amen.

Find out where the candidates stand on peacebuilding and security issues. If a candidate’s position is unclear, reach out to the campaign and ask. Let candidates know you are concerned about human security, get them on the record, and vote for true security and positive, just peace!