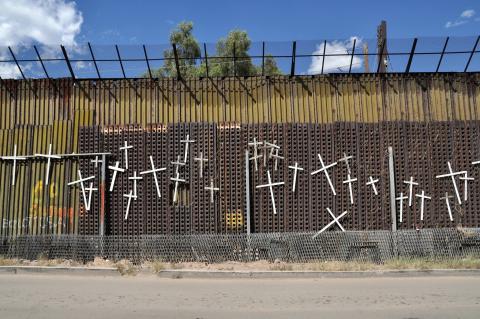 The following are additional resources on U.S. immigration policy, which correspond to our two-page election brief, "Justice for Immigrants in U.S. Policy." Find our entire series on Faithful Voting and Global Issues here.

Explore this new report from the bi-partisan Migration Policy Institute cataloguing the over 400 changes made to the U.S. immigration system during the Trump administration which have dramatically reshaped it.

For various articles and research projects on just U.S. immigration reform, explore the U.S. Immigration Reform Initiative from the Center for Migration Studies in New York, a think tank and project of the Scalabrini fathers, sisters, and lay people working with migrants around the world.

Read these answers to frequently asked questions about U.S. immigration policy from the U.S. Conference of Catholic Bishops (USCCB).

Read about a new docu-series, Immigration Nation, about the current era of immigration enforcement, now available on Netflix.

Read an article in the Atlantic, "How Immigration Became So Controversial."

Read this New York Times interactive article about how climate change is increasingly pushing people to migrate from the Global South northward, particularly from Central America.

Learn more about the state of asylum at the U.S.-Mexico border and the history of asylum policy by watching this week's Meet a Missioner Monday with Heidi Cerneka, a Maryknoll Lay Missioner working as an immigration attorney at the southwest border.

Read more about Catholic social teaching principles on migration and priorities for comprehensive immigration reform from the USCCB.

Explore the 2003 joint Pastoral Letter on migration, Strangers No Longer: Together on the Journey of Hope, from the USCCB and the Mexican Bishops’ Conference.

Sign up for action alerts from the Justice for Immigrants campaign at the USCCB, through which you can take action to support just immigration policy.

Sign up to receive action alerts from CLINIC, the Catholic Legal Immigration Network, a network of attorneys and legal experts working to provide representation to immigrants in the U.S. and advocating for just immigration reform.

Explore Ballotpedia, a website cataloguing U.S. political candidates’ positions on specific issues, including immigration. Urge your candidates to promote just and comprehensive immigration reform and vote for justice for immigrants.