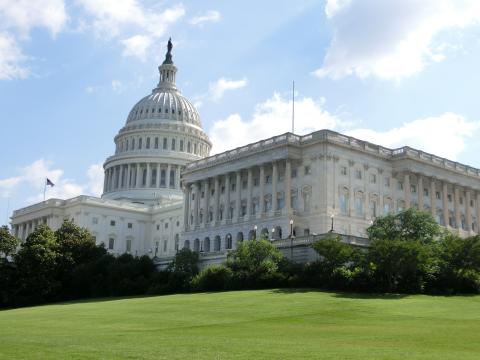 A new film entitled ‘The Report’ depicts the decade-long, Senate investigation of the Central Intelligence Agency’s torture program. The following article was published in the January-February 2020 issue of NewsNotes.

On November 5, the Maryknoll Office for Global Concerns joined colleagues from the National Religious Campaign Against Torture for the Washington, D.C. premier of The Report, a film about the Senate Select Intelligence Committee’s 2014 investigation of the Central Intelligence Agency (CIA) torture program. The film offers a unique, engaging opportunity for United States citizens to understand the nature of the CIA torture program, its moral and practical failings, and the lengths to which the CIA and others went to stymy Senate oversight and sabotage the public release of the report.

The Report follows Senate staffer Daniel Jones as he works with the Senate Intelligence Committee to investigate the use of torture on suspected terrorists by the CIA following the September 11 attacks. Prompted by the CIA’s destruction of interrogation videotapes in 2005, the real-life investigation continued over ten years.

For years, the CIA tried to prevent any part of the resulting 6,700 page Senate report from being released to the public. In the end, a redacted 500-page summary was released in 2014. In a statement at that time, the Maryknoll Office for Global Concerns recognized “the great importance of the publication of this document, which details terrible acts of horrific brutality… The report clearly documents that these immoral techniques often failed to generate intelligence or produced false information. (The intelligence ultimately provided could have been acquired by lawful means.) Finally, the report shows that the CIA misled both Congress and certain members of the Bush administration in order to obtain approval for its torture program.”

Following the report’s release in 2014, Senators John McCain and Dianne Feinstein co-authored the amendment to the National Defense Authorization Act seeking to ensure that U.S. agencies no longer use torture.

Past and present government officials continue a campaign of misinformation about the report’s findings. Secretary of State Mike Pompeo, who previously served as Director of the CIA under President Trump, called the film The Report “fiction.”

However, the filmmakers have been transparent about how meticulously the film was researched and how thoroughly the script was informed by the facts of the investigation. Daniel Jones, the Senate staffer played by Adam Driver in the film, joined the film’s writer-producer-director, Scott Z. Burns, at a panel discussion following the film’s D.C. premier to describe the research behind the film. The panelists invited viewers to visit a website for the film which annotates the entire screenplay, with footnotes and links describing the real events the film portrays. Senator Dianne Feinstein, former chair of the Intelligence Committee, who is played by Annette Bening in the film, also attended the D.C. premier, along with fellow committee-members Senators Sheldon Whitehouse and Angus King. Other investigators who worked with Jones on the report and staff from the McCain Institute attended as well.

The film offers a valuable corrective to the CIA’s claims that the torture program was legal and necessary, that it resulted in intelligence that saved the lives of U.S. citizens, and that this information could not have been obtained another way. The Senate report – based in part on the CIA’s own internal report on the program, called the Panetta Review, which the CIA under Director John Brennan tried to keep from Senate investigators – establishes that such claims are unfounded. The torture program produced no such intelligence, undermining the CIA’s own legal justifications for the secret program.

No one was ever held accountable for the torture program. Indeed, former CIA director John Brennan is now a frequent commentator on cable news. Gina Haspel, who oversaw a military site where torture was used and ordered the destruction of video tapes of interrogations, is now Director of the CIA. In 2018, Maryknoll joined other faith groups in publicly opposing her nomination. During his 2016 election campaign, Donald Trump said he would bring back torture techniques such as waterboarding.

All U.S. citizens would do well to watch The Report, now streaming on Amazon. Burns and Jones also urged citizens to read the report itself, or listen to the audio book, read by the film’s cast. Finally, to ensure that the U.S. never again engages in torture, the original, 6,700-page Senate Intelligence Committee report and the Panetta Review should be released to the public. As Daniel Jones said in a recent Washington Post op-ed, “the American public (should know) the full details of what the CIA did in its name. And with these facts transparently laid out, and with a commitment to never commit these crimes again, we can close this dark chapter once and for all.”