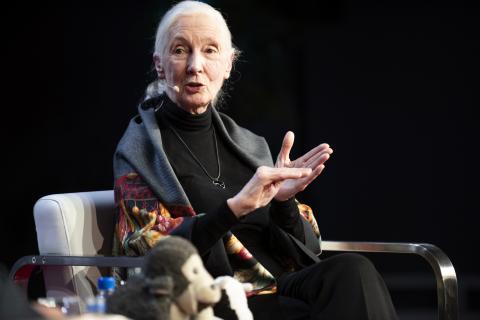 The Vatican hosted a webinar to promote protecting biodiversity as a means of restoring the Earth and human life. This article was published in the May-June 2021 issue of NewsNotes.

Dr. Jane Goodall and Cardinal Peter Turkson were the keynote speakers on a webinar on biodiversity hosted by the Vatican’s Dicastery for Integral Human Development, in partnership with the Vatican Covid-19 Commission Ecology Taskforce on April 20, 2021. Watch the recording at https://bit.ly/3vt853f.

The online event, entitled “The Road to COP15,” (referencing the UN Biodiversity Conference, rescheduled due to the pandemic for October in Kunming, China) aimed to “share wisdom, understanding, experiences and mutual insights drawn from various disciplines of knowledge including the indigenous and scientific traditions, the Holy Scriptures, and the Social Doctrine of the Church on biodiversity,” Vatican News reported.

“These, together, will advocate and inspire biodiversity protection and restoration at the upcoming fifteenth meeting of the Conference of the Parties to the UN Convention on Biological Diversity (COP15) and COP26 meetings.”

"We need to reduce lifestyles of having way more than we need," said Dr Jane Goodall, famed British primatologist and anthropologist best known for her 60-year study of social and family interactions of wild chimpanzees.

CIDSE, a network of Catholic social justice organizations of which the Maryknoll Office for Global Concerns is a member, released a press statement about the webinar.

“Today we face multiple crises,” the CIDSE statement reads. “The COVID health crisis, the climate crisis and the biodiversity crisis are three interconnected crises calling us to change direction towards a regenerative civilization with an integral ecological story and pattern of life.”

The statement by CIDSE goes on to point out the importance of biodiversity in addressing climate change and long-term food security, as noted in the 2020 UN Global Biodiversity Outlook Report. The report concludes that actions to protect biodiversity are essential for preventing future pandemics.

“The world is at an inflection point,” the CIDSE statement reads, “with life altering consequences and a responsibility to act. It is time to amplify Pope Francis’ teachings in Laudato Si’ to co-create life-giving relationships with creation and inspire thousands of people to do the same with the output of our roundtable, public webinar, education and advocacy to regenerate healthy ecosystems on Earth. When biodiversity flourishes, human life flourishes.”

1.    Biodiversity is already suffering from human actions. The extinction rate today is 10 to 100 times higher than the past 10 million years. Every animal and plant has a unique, essential role in nature. Each species extinction is like removing a brick from a tower – as more pressure is put on the other bricks, the risk of total collapse increases. Acting now to preserve biodiversity boosts the resiliency of ecosystems to other harms, including climate change.

3.    Biodiversity is an essential tool in fighting the climate crisis. Land and ocean ecosystems are currently the only way we have of trapping large amounts of carbon dioxide, and together they absorb 60% of human-caused emissions. Protecting our diverse ecosystems is critical to meeting our climate goals. Not only does biodiversity loss drive climate change, but as the climate changes, biodiversity faces a substantial risk. If we act now, biodiversity can be part of the climate solution. In fact, nature-based solutions – climate strategies with co-benefits for biodiversity – have the potential to provide more than a third of the necessary emissions reductions needed by 2030 to meet the goals of the Paris Agreement.

4.    Biodiversity loss disproportionately affects poor and Indigenous communities. Because many of these communities rely heavily on biodiversity for food, livelihoods, and health, declines in biodiversity have a more severe impact on them, and in fact they are already experiencing this loss. A quarter of the land on Earth – representing a significant amount of the world’s biodiversity – is home to Indigenous people.

5.    Sustainable development relies on biodiversity. A majority of UN Sustainable Development Goals (SDGs) are threatened by declines in biodiversity and ecosystem functions. From hunger and water, to gender and equity, achieving our global goals requires the protection and restoration of ecosystems, as well as the sustainable and equitable use of biodiversity.

Countries recently made commitments to protect biodiversity at the UN Summit on Biodiversity in September 2020. This upcoming October, they hope to approve new and updated targets at the UN Biodiversity Conference in China.