Promoting nonviolence with the Catholic Church 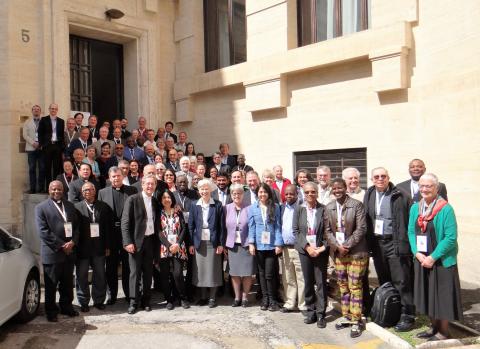 The Maryknoll Office for Global Concerns was an organizer and participant in the second international meeting on nonviolence hosted by Pax Christi International and the Vatican Dicastery for Promoting Integral Human Development in Rome in April 2019. This article was published in the May-June 2019 issue of NewsNotes.

Approximately 80 activists, bishops, theologians, peace practitioners, and faith leaders took part in a two-day workshop entitled “Path of Nonviolence: Towards a Culture of Peace” in Rome on April 4 and 5. Participants came from Mexico, Venezuela, Costa Rica, Colombia, Honduras, Brazil, Canada, the United States, Uganda, South Sudan, Kenya, Nigeria, Ethiopia, Palestine, Philippines, Pakistan, Sri Lanka, Fiji, the United Kingdom, France, and Italy. The purpose of the workshop was to carry on the dialogue that had begun at the first conference on nonviolence hosted by Pax Christi International and the Pontifical Council for Justice and Peace in Rome in 2016.

Cardinal Peter Turkson from Ghana and the Prefect of the Dicastery, gave the keynote address on the nonviolence of Jesus, examining his mind, meekness, and humility. "Christian nonviolence may indeed have a face and a name; and that the face and the name is Jesus, meek and humble of heart," Cardinal Turkson said. He described the meekness that Jesus teaches us, for which he pronounces us blessed, and with which we can overcome violence, as made from two things: trust in God and inner strength – "strength of the soul."

Cardinal Joseph Tobin of Newark, New Jersey, moderated the workshop’s first session, in which the participants, many of whom live and work in communities wracked by violence, reflected on the signs of the times and proposed pathways of nonviolence.

The workshop represented tremendous progress for Pax Christi International’s Catholic Nonviolence initiative (CNI), of which MOGC is a founding member, which was launched after the first Nonviolence and Just Peace Conference in Rome in April of 2016. It was the culmination of a more than two-year process in which MOGC and the partner organizations comprising CNI brought together nearly one hundred voices of veteran practitioners of active nonviolence to share their spirituality as well as their practices through a structure of five roundtables meeting around the world. The roundtables gathered best thinkings on a foundational theology of nonviolence and the nonviolent example of Jesus in the Gospels and produced a new moral framework of nonviolence and just peace, recommendations on the integration of nonviolence into the life of the Catholic Church and a people’s encyclical on the power of active nonviolence.

The workshop’s participants raised the importance of encounter and conversion, favorite themes of Pope Francis, and delivered numerous impassioned pleas for an encyclical on Gospel nonviolence from the pope. They also repeatedly spoke of their individual and personal experiences and practices of active nonviolence as the root of their understandings of Scripture and their call for action by the Church.

In a joint press release issued immediately following the workshop, Monsignor Bruno Marie Duffé from France and Secretary of the Dicastery said, “Our conversations on nonviolence and peace filled our hearts and minds with a consideration of the dignity of each person – young people, women and men, people who are impoverished, citizens and leaders. Nonviolence and peace call us to receive and to give, to gather and to hope.”

Marie Dennis, Co-president of Pax Christi International, added: “Pax Christi International deeply appreciates the support and participation of the Dicastery in this workshop, which has been a significant and positive step in the work of the Catholic Nonviolence Initiative. We are touched by the interventions from all the participants, who reiterated the importance of nonviolence rooted in respect, patience, and spiritual strength.”

Cardinal Blase Cupich of Chicago, Illinois, was not able to attend but expressed his support for the workshop in a letter addressed to attendees in which he wrote of the collective call “to take a clear stand for active nonviolence and against all forms of violence…(including) the structures and global systems that dehumanize our brothers and sisters, robbing them of their God-given dignity….” He “[invited] us to boldly integrate Gospel nonviolence at every level of the Church…(and to) initiate a global conversation on nonviolence - within the Church, with people of other faiths, and with the larger world - on how to respond to the monumental crises of our time with the vision and strategies of active nonviolence.”

In a recent article in the National Catholic Reporter, 'Vatican's second conference on nonviolence renews hope for encyclical, Joshua J. McElwee wrote that ample material was provided for a possible encyclical or teaching document “on the power of nonviolence to bring about social change…(and to) reexamine the Catholic Church’s teachings on war.” The workshop represents a hopeful step in the recommitment of the Catholic Church to the transformational promise and salvific centrality of Gospel Nonviolence – a step that is urgently needed and whose time has come.

Image; Particiants of the two-day workshop entitled “Path of Nonviolence: Towards a Culture of Peace” in Rome, April 5, 2019. This photo and many more from the workshop are available at Flickr/Pax International.