Progress made toward nuclear disarmament 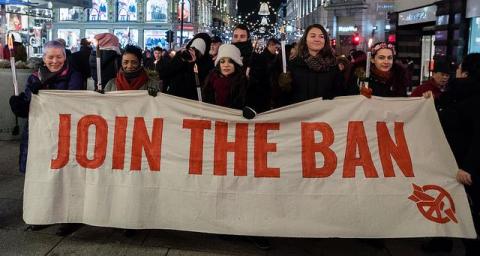 The following is a list of notable international developments toward nuclear disarmament in the past year. This article was published in the January-February 2019 issue of NewsNotes.

As of the end of 2018, nineteen governments have ratified the 2017 Treaty on the Prohibition of Nuclear Weapons (TPNW). Commonly known as the nuclear ban treaty, it will become international law once that number reaches 50. It is just short of 40 percent toward its target number of ratifications and subsequently entering into force.

Like previous prohibitions against landmines, chemical weapons, and biological weapons, the nuclear ban treaty prohibits the development, testing, production, stockpiling, stationing, transfer, use, and threat of use of nuclear weapons. The treaty is seen as a way to establish an important international norm against these weapons of mass destruction.

Yet juxtaposed with this reality, the United States is developing “usable” nuclear weapons. As John LaForge writes in Nukewatch, one such weapon is the new B61 gravity bomb (model 12), commissioned by the National Nuclear Security Administration and now being developed by more than a dozen U.S. companies contracted to design, test, build and maintain the B61-12s (a gravity bomb dropped from fighter jets and heavy bombers), and set for mass production in 2020.
The biggest weapons profiteers in the world are cashing in on the B61 project. The list includes: Boeing, Lockheed Martin, Honeywell, and others.

The pope has expressed interest in visiting the two cities in the second half of 2019. This would be the first visit to Japan by a pope since 1981. On January 7, in an annual speech to diplomats informally known as his “state of the world” address, Pope Francis again condemned the arms trade and possession of nuclear weapons, lamenting that past efforts at nuclear disarmament had given way to “the search for new and increasingly sophisticated and destructive weapons.”

Major progress on “Don’t Bank on the Bomb”

The Don’t Bank on the Bomb report and campaign by PAX, the Netherlands affiliate of Pax Christi and partner of ICAN, has succeeded in moving major financial institutions to divest from nuclear weapons. The list of institutions includes the Norwegian Government Pension Fund Global (worth over $1 trillion), Germany’s Deutsche Bank, Belgian bank KBC, and ABP, the fifth largest pension fund in the world.

The Swiss parliament requested that the government join the nuclear ban treaty along with the Australian Labor party as ICAN aims to reach the 50-state mark that will bring the treaty into force.

On December 21, 2018, Congresswoman Lee of California became the fifth member of Congress to sign ICAN’s Parliamentary Pledge, a commitment by parliamentarians around the world to work for their government to join the TPNW. She joined nearly 1,000 parliamentarians from 30 countries as well as Representatives Holmes Norton (D-DC), McCollum (D-MN), Ellison (D-MN), and McGovern (D-MA).

The North Korean leader included a key strategic message in his annual address on January 1. Kim warned that “we even might find ourselves in a situation where we have no other choice but to find a new way for defending the sovereignty of the country and the supreme interests of the state and for achieving peace and stability of the Korean peninsula,” which experts point to as a reference to an expectation of increasing support from China and aimed at President Donald Trump.

Back from the Brink

Back from the Brink: The Call to Prevent Nuclear War is a national grassroots initiative seeking to fundamentally change U.S. nuclear weapons policy. Over the past year they have been successful in urging several major cities, namely Baltimore and Los Angeles, to adopt resolutions against nuclear weapons. You can join the effort as an individual at https://www.preventnuclearwar.org/.

Click HERE to tell Congress to save tthe INF nuclear treaty. President Trump has said that he plans to withdraw the United States from a key agreement with Russia that banned intermediate-range nuclear missiles. President Reagan signed the INF Treaty in 1987 and the U.S. Senate approved its ratification. Now, experts are alarmed that pulling out of the treaty will heighten the risks of nuclear war. Congress has the power to force adherence to the treaty if it chooses to act. Email your two Senators and your Representative.

Image: Rally in support of the nuclear ban treaty. Photo by Ralf Schlesener and courtesy of ICAN.