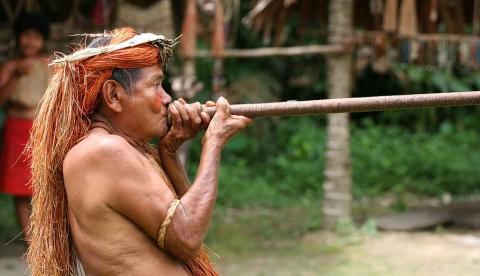 Pope Francis continues to raise the importance of the Amazon region, its indigenous communities and unique natural environment, to the Church and the world. But questions remain and more dialogue is needed. The following article was published in the March-April 2018 issue of NewsNotes.

Pope Francis kicked off preparatory meetings for a synod on the Pan-Amazon region in October 2019 with a visit to Puerto Maldonado, a small city in Peru that serves as the gateway to the Amazon. Beautifully dressed and tattooed indigenous families, many wearing the traditional beads and headdresses, shared their culture with the pope through dance, songs and stories.

Pope Francis, in turn, engaged them as authentic dialogue partners. In his opening words, he called by name many of the tribes present. He recognized the wounds that Amazonia and its people bear and affirmed the Church’s commitment to a heartfelt option for the defense of life, earth, and cultures.

During his address to more than 4,000 attendees, Pope Francis touched on a number of relevant challenges that face the Amazon ecosystem and forest peoples that inhabit it. Most urgent is the threat Amazonian communities face to their territorial rights and access to land from large-scale land acquisitions, often referred to as “land grabbing.” The pope named extractive industries and conservation efforts as drivers of these threats.

“On the one hand, there is neo-extractivism and the pressure being exerted by great business interests that want to lay hands on its petroleum, gas, wood, gold and forms of agro-industrial monocultivation,” Francis said.

“On the other hand, its lands are being threatened by the distortion of certain policies aimed at the ‘conservation’ of nature without taking into account the men and women, specifically you, my Amazonian brothers and sisters, who inhabit it. We know of movements that, under the guise of preserving the forest, hoard great expanses of woodland and negotiate with them, leading to situations of oppression for the native peoples; as a result, they lose access to the land and its natural resources. These problems strangle her peoples and provoke the migration of the young due to the lack of local alternatives. We have to break with the historical paradigm that views Amazonia as an inexhaustible source of supplies for other countries without concern for its inhabitants.”

Concerns about displacement and land conflicts associated with resource extraction are more well-known than the challenges related to conservation efforts. While there are numerous examples of land grabbing and of projects impinging on cultural, economic, and political rights of indigenous communities, Pope Francis did not offer more explanation of his concerns related to conservation efforts.

We can look to Laudato Si’  for a clue. In his groundbreaking encyclical on integral ecology, Pope Francis criticized carbon markets. One example is REDD+ (Reductions in Emissions from Deforestation and Degradation), a climate mitigation program governments and the private sector can use to offset emissions by giving payments to indigenous communities in exchange for conserving the forest. But REDD+ projects can drive conflict and impinge on indigenous rights.

Pope Francis also could have been referring to the establishment of national parks or other protected sites that can displace or limit the rights of indigenous peoples in the land they inhabit. Conservation through national parks is a valuable though complicated process that requires careful examination. It is unfortunate that Francis was not more explicit and we are left to wonder.

While in Peru, Francis gave special recognition to communities living in voluntary isolation, who, he said, go into seclusion to find freedom. Such communities are vulnerable to diseases from the outside world and threats from illegal loggers and hunters. In Ecuador, the Catholic Church is defending the rights of isolated communities in Yasuní National Park.

Pope Francis also spoke about the need for bilingual education and culturally appropriate health care, and he denounced the practice of sterilization of indigenous women promoted by some governments. He spoke about human trafficking – both for sex and labor – around illicit mining sites. He did not, however, cite the trafficking and prostitution around permitted extractive sites.

His visit to Peru, the planned synod in Rome, and the references to the Amazon biome in Laudato Si’ all lay clear the pope’s view of the importance of this region to the world. In accord with the pope, the Inter-American Commission on Human Rights ruled on February 8 in support of both the individual and collective right to a healthy environment.  The commission also recognized the impact of climate change on the effective enjoyment of human rights, particularly for the most vulnerable populations. This decision could lead to changes in international law and court jurisdictions that go beyond the borders of Latin America.

Photo: A Yagua (Yahua) tribeman demonstrating the use of blowgun (blow dart), at one of the Amazonian islands near Iquitos, Peru. Credit: JialiangGao www.peace-on-earth.org via Wikimedia Commons