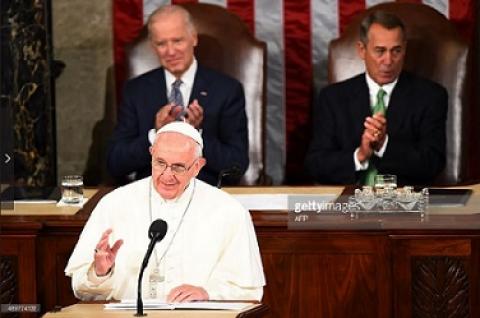 September 24, 2015 - Pope Francis made history today by becoming the first pontiff to address a joint meeting of Congress. He spoke of challenges that are complex, grave, and urgent. And he invoked four historical American figures who have shaped our fundamental values.

Below are quotes from each topic the pope addressed. You can read the full transcript here and watch the video here.

"Three sons and a daughter of this land, four individuals and four dreams: Lincoln, liberty; Martin Luther King, liberty in plurality and non-exclusion; Dorothy Day, social justice and the rights of persons; and Thomas Merton, the capacity for dialogue and openness to God."

"In honoring their memory, we are inspired, even amid conflicts, and in the here and now of each day, to draw upon our deepest cultural reserves."

"A nation can be considered great when it defends liberty as Lincoln did, when it fosters a culture which enables people to “dream” of full rights for all their brothers and sisters, as Martin Luther King sought to do; when it strives for justice and the cause of the oppressed, as Dorothy Day did by her tireless work, the fruit of a faith which becomes dialogue and sows peace in the contemplative style of Thomas Merton.”

“This year marks the one hundred and fiftieth anniversary of the assassination of President Abraham Lincoln, the guardian of liberty, who labored tirelessly that “this nation, under God, [might] have a new birth of freedom.”

"Building a future of freedom requires love of the common good and cooperation in a spirit of subsidiarity and solidarity."

"Our world is increasingly a place of violent conflict, hatred and brutal atrocities, committed even in the name of God and of religion. We know that no religion is immune from forms of individual delusion or ideological extremism. This means that we must be especially attentive to every type of fundamentalism, whether religious or of any other kind."

"A delicate balance is required to combat violence perpetrated in the name of a religion, an ideology or an economic system, while also safeguarding religious freedom, intellectual freedom and individual freedoms."

"But there is another temptation which we must especially guard against: the simplistic reductionism which sees only good or evil; or, if you will, the righteous and sinners."

“The contemporary world, with its open wounds which affect so many of our brothers and sisters, demands that we confront every form of polarization which would divide it into these two camps.”

“Our response must instead be one of hope and healing, of peace and justice.”

“I think of the march which Martin Luther King led from Selma to Montgomery fifty years ago as part of the campaign to fulfill his “dream” of full civil and political rights for African Americans. That dream continues to inspire us all.”

“We, the people of this continent, are not fearful of foreigners, because most of us were once foreigners. I say this to you as the son of immigrants, knowing that so many of you are also descended from immigrants.”

“Building a nation calls us to recognize that we must constantly relate to others, rejecting a mindset of hostility in order to adopt one of reciprocal subsidiarity, in a constant effort to do our best. I am confident that we can do this.”

“We must not be taken aback by their numbers, but rather view them as persons, seeing their faces and listening to their stories, trying to respond as best we can to their situation. To respond in a way which is always humane, just and fraternal.”

“We need to avoid a common temptation nowadays: to discard whatever proves troublesome. Let us remember the Golden Rule: “Do unto others as you would have them do unto you.” (Mt 7:12)

"Every human person is endowed with an inalienable dignity, and society can only benefit from the rehabilitation of those convicted of crimes.”

“A just and necessary punishment must never exclude the dimension of hope and the goal of rehabilitation.

“In these times when social concerns are so important, I cannot fail to mention the Servant of God Dorothy Day, who founded the Catholic Worker Movement. Her social activism, her passion for justice and for the cause of the oppressed, were inspired by the Gospel, her faith, and the example of the saints.”

“The fight against poverty and hunger must be fought constantly and on many fronts, especially in its causes."

“Business is a noble vocation, directed to producing wealth and improving the world. It can be a fruitful source of prosperity for the area in which it operates, especially if it sees the creation of jobs as an essential part of its service to the common good.” (Laudato Si’, 129)

"In Laudato Si’, I call for a courageous and responsible effort to “redirect our steps” (ibid., 61), and to avert the most serious effects of the environmental deterioration caused by human activity."

"I am convinced that we can make a difference and I have no doubt that the United States – and this Congress – have an important role to play."

"Now is the time for courageous actions and strategies, aimed at implementing a “culture of care” (ibid., 231) and “an integrated approach to combating poverty, restoring dignity to the excluded, and at the same time protecting nature” (ibid., 139).

“A century ago, at the beginning of the Great War, which Pope Benedict XV termed a “pointless slaughter”, another notable American was born: the Cistercian monk Thomas Merton. He remains a source of spiritual inspiration and a guide for many people.”

“Merton was above all a man of prayer, a thinker who challenged the certitudes of his time and opened new horizons for souls and for the Church. He was also a man of dialogue, a promoter of peace between peoples and religions.”

“When countries which have been at odds resume the path of dialogue – a dialogue which may have been interrupted for the most legitimate of reasons – new opportunities open up for all. This has required, and requires, courage and daring, which is not the same as irresponsibility."

“Why are deadly weapons being sold to those who plan to inflict untold suffering on individuals and society? Sadly, the answer, as we all know, is simply for money: money that is drenched in blood, often innocent blood. In the face of this shameful and culpable silence, it is our duty to confront the problem and to stop the arms trade.”