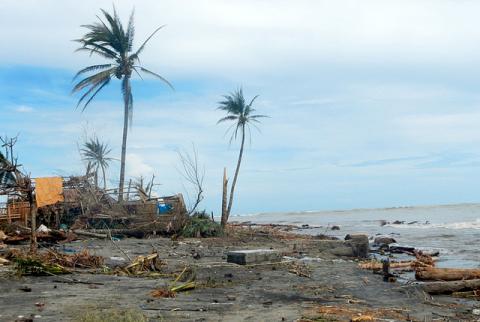 From November 26-December 8, 2012, the UN held a meeting in Doha, Qatar on the UN Framework Convention on Climate Change and Kyoto Protocol.

Read an article about preparations for the meeting in the November-December 2012 NewsNotes.

On December 4, Typhoon Bopha hit the Philippines, at "the large southern island of Mindanao," reports CNN, "which is rarely in the direct path of tropical cyclones."

In Doha, Yeb Saño, member of the Philippines Climate Change Commission, broke down as he addressed his fellow negotiators at the climate change meeting: "We have never had a typhoon like Bopha, which has wreaked havoc in a part of the country that has never seen a storm like this in half a century. And heartbreaking tragedies like this is not unique to the Philippines, because the whole world, especially developing countries struggling to address poverty and achieve social and human development, confront these same realities ... Please ... let 2012 be remembered as the year the world found the courage to ... take responsibility for the future we want. I ask of all of us here, if not us, then who? If not now, then when? If not here, then where?"

We will have more about the climate change negotiations and Typhoon Bopha in the January-February 2013 NewsNotes.

Photo of Typhoon Bopha aftermath from International Organization for Migration