Philippines: Respect the dignity of life 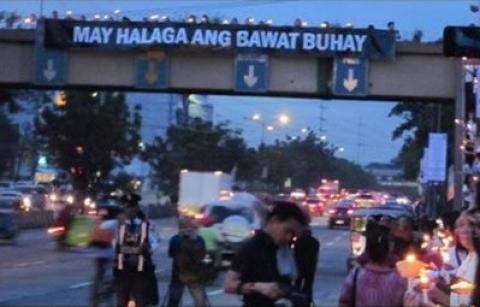 Voices of the church continue to denounce the massive wave of extrajudicial killings in the Philippines incited by President Rodrigo Duterte. The following article was published in the November-December 2016 issue of NewsNotes.

On September 21, the UN’s International Day of Peace, hundreds of students of Miriam College, an institution founded by the Maryknoll Sisters, took to the streets of Quezon City, where they lit candles to remember the lives lost in the government’s war on drugs.

Jasmin Galace, director of Miriam College’s Center for Peace Education, and the head of Pax Christi Philippines, explained that thousands of students had also sent a letter to President Duterte calling for an end to the killing.

“We will say our piece, we will speak up for peace,” said Galace, who is also a member of the Catholic Initiative for Nonviolence, and attended the historic Nonviolence and Just Peace conference at the Vatican last April.

On October 17, the social action network of the Philippine Catholic bishops added its voice to calls for a stop to drug-related killings in the country. In their statement, "Respect the dignity of life," the network of religious, priests, and laypeople from 86 dioceses called on President Duterte “to put a stop to extrajudicial violence.” Members of the network said Duterte has a “greater obligation to be in the forefront of respecting the rule of law, which calls for respect for the judicial process in his fight against crime and illegal drugs.”

“Killing of suspected drug traffickers without due process, even in the name of a just cause, is morally unacceptable,” said the group. The network was set up by the Philippine Catholic bishops in 1966 “to accompany the poor and marginalized in the just and legitimate struggle for social justice and transformation.”

The Catholic network called on the judiciary to initiate reforms in the justice system, saying that extrajudicial violence can be an expression of  “mistrust in our corrupted justice system.” They are also concerned that most of those killed are poor people living in slums.

Other Catholic voices have urged Filipinos to be a "visible force" and to take a stand against the killings.

“The Philippine government's war against illegal drugs has become a challenge to Filipino Catholics, not only to church leaders but to “the people of God” who believe in the sacredness of life and in mercy and compassion.”

President Duterte has responded to church leaders’ criticisms of extrajudicial killings by attacking them.

"I'm really appalled by so many groups and individuals, including priests and bishops, complaining about the number of persons killed in the operation against the drug problem," said the president.

He singled out retired Archbishop Fernando Capalla of Davao, where the president was mayor for two decades. He accused the bishop and priests — who had voiced concern over the rising number of killings — of having mistresses. “Those priests, sons of whores, they keep preaching morality,” said Duterte.

He has since told reporters that he heard the voice of God telling him to stop cursing and that he plans to obey.

Archbishop Capalla’s remarks that incensed the president expressed concern for the unabated spiral of killings of poor drug users and pushers: "Wrong is wrong even if everybody is doing it and right is right even if nobody is doing it," the prelate said in a television interview. The archbishop urged Duterte "to listen to the people, to the poor people who are also suffering."

Meanwhile, on October 13 in Geneva, Pax Christi International and Franciscans International expressed their grave concern for these human rights abuses to the UN Human Rights Council. They called on the international community to push for impartial investigations and they called on the government of the Philippines to seek nonviolent solutions to the problem of drugs and crime and to build a culture of peace.

Photo: May halaga ang bawat buhay (“Every life has value”) sign hanging at a prayer vigil for the victims of President Duterte’s war on drugs in the Philippines on September 26. Photo courtesy of Maryknoll Sister Marvie Misolas.