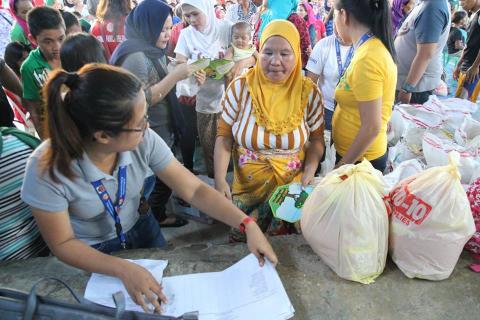 Fred Goddard, a returned Maryknoll Lay Missioner and former executive director of the Maryknoll Affiliates who works with the Mindanao Peacebuilding Institute in the Philippines, wrote the following article on June 26, which was Eid al-Fitr, the Islamic holy day that marks the end of the fasting month of Ramadan. It was published in the July-August 2017 issue of NewsNotes.

On May 23, government armed forces in the Philippines attempted to capture or kill members of the Maute group, a terrorist group inspired by the so-called Islamic State (IS), in a residential and commercial area just outside of Marawi, the largest city on the island of Mindanao. The fighters were able to retreat into the city and alert other “cells” to join the fighting. The violence escalated quickly throughout the city and Philippine President Rodrigo Duterte responded by declaring martial law in all of Mindanao. The battle for Marawi has now raged for over one month.

University of the Philippines professor Miriam Coronel-Ferrer, chair of the government panel in peace talks with the Moro Islamic Liberation Front during the Aquino administration, described the Maute group in a recent article on the Philippine news website www.inquirer.net as more potent than other small, upstart militants groups in Mindanao that claim to want an Islamic state that is part of a global caliphate.

Brothers Abdullah and Omarkhayam Romato Maute founded the group in 2012, which they called Daulat Ul Islamiyah, and also referred to as IS Ranao. The group has become more popularly known by their family name, Maute.

In the media, the Maute group has been labeled as everything from terrorists and extremists to common criminals and drug lords. This group uses violence to assert their agenda. They have taken innocent lives and destroyed property, often justifying it in the name of Islam. Their connection with IS, however, is not clear. They have raised the black flag associated with IS, but whether there is any real connection or whether they just identify with the militant organization remains to be determined.

The Maute group’s alleged involvement in illegal drug and arms dealing masks a complicated reality in a part of the Philippines that has seen very little investment or development of a formal economy. As in places like Afghanistan, where radical fundamentalist groups have grown among people who live on the margins of the society, such groups turn to financing their operations by illegal means.

Two disconcerting realities seem to be emerging. First, there exist in Marawi terrorist “cells” capable of quickly joining the fight against government forces. Many people suspected this possibility, but it seems the government either ignored such reports or did not feel these cells posed a threat. This raises questions about the possibility of cells elsewhere in Mindanao or other parts of the Philippines and the possibility of other acts of violence.

Second, disparate factions of similar militant groups in Mindanao seem to be uniting. In her article, Professor Coronel-Ferrer refers to the “four-cornered alliance” made up of the Maute group, the Abu Sayyaf group (which has operated primarily in the Sulu archipelago and had identified with al-Qaida), the Bangsamoro Islamic Freedom Fighters (known as one of the main forces in the Mamasapano incident in 2015 that left 67 people dead), and the Ansar Al Khilafah Philippines (AKP) group, which operates in South Cotabato and Sarangani.

According to Coronel-Ferrer, the “AKP has been described as having the closest links to IS fighters through their Indonesian and Malaysian comrades.” All four groups in the alliance are break-away groups from the more conventional Moro Islamic Liberation Front and Moro National Liberation Front, both of which entered into peace negotiations with the government.

To deal with the crisis in Marawi City, President Duterte declared martial law for 60 days in Mindanao on the evening of May 23. Supporters of Duterte inside and outside the government were quick to praise his action. However, many others have raised questions, the most prominent being, why was martial law declared for all of Mindanao when the fighting is limited to Marawi?

The government has reasoned that there could be violence in other areas and by other groups, such as the armed wing of the Community Party called the New People’s Army, which has taken police and soldiers captive in the past. Duterte also claims that there is lawlessness throughout Mindanao, seemingly in reference to his “war on drugs” and his desire to continue his violent campaign.

President Duterte has threatened to declare martial law across the Philippines. Many of those who have spoken out against it point to the ability of government security forces to apply necessary and commensurate use of force and to bring the situation under control without such sweeping authoritarian action.

Because the majority in both houses of the Philippine congress supports the Duterte government, they made little more than a cursory review of the martial law proclamation and rejected all attempts to have it rescinded. Oral arguments before the Supreme Court were taking place the week of June 19, but there has been little news regarding these proceedings.

Mindanao is now more than halfway through the 60 days of martial law. Some fear that Duterte will push for an extension. In recent speeches, the president has wavered between pledging to abide by the decision of the Supreme Court or just ignoring it. For many, though, these days bring back memories of martial law under Ferdinand Marcos and have re-traumatized many of the victims.

As of June 26, the battles in Marawi continue. The Maute group still holds hostages, including Father Teresito “Chito” Suganob, a Catholic priest who has dedicated his life to working among the people of Marawi. Father Chito is a firm believer in interreligious dialogue.

The Maute group is holed up in a few buildings, but also has tunnels and knows the terrain well. The military, for its part, has used air strikes and shelling to try to defeat the Maute group. Sadly, ten soldiers from the Philippine government were accidently killed in an air strike by their own forces.

The United States has also become involved, with U.S. armed forces providing surveillance for the Philippine government forces in Marawi. According to Philippine television network ABS-CBN, “U.S. assistance is only limited to ‘technical support’ and assured the public that there are ‘no boots on ground.’” President Duterte claimed he had no knowledge of U.S. involvement beforehand, saying, “I am not aware of that, but under martial law, I gave the power to the defense department.”

Depending on the source, there are somewhere between 200,000 and 300,000 internally displaced people from Marawi, if the surrounding communities are included. Many are fleeing to nearby cities, where local governments, churches and organizations are responding, though they are overwhelmed by the needs.

Beyond the immediate environs, there are also other repercussions. The Communist Party of the Philippines/National Democratic Front and their armed forces, the New People’s Army, had apparently considered renewing military offensives in response to the declaration of martial law. The peace talks were disrupted, but are resuming, though tensions are high.

Social media, which is often touted as doing much for democracy, seems to be contributing to the divide. Any critique of the president, the government, or the declaration of martial law is quickly met with an onslaught of criticism. Fake news is rampant, much of it stoking the fear of Muslims. It has been reported that Muslims are finding it difficult to rent apartments or homes in cities that are majority Christian.

In the end, as always, the root causes of the violence must be addressed. Many of those who have joined these militant groups are young people frustrated by the lack of significant change in their communities. They are especially frustrated by the slow progress of talks with the government that are meant to return control of parts of Mindanao that historically have been part of Muslim sultanates to the Muslims themselves.

Amid the violence there are signs of hope. The online newspaper Rappler reported that an eight-hour ceasefire (‘humanitarian pause’) on June 25 “allowed five Muslim religious leaders to enter ground zero and negotiate with the terrorists to release civilian hostages, especially children, women, and the elderly.” There are many reports of those evacuating and those receiving them coming to each other’s aid. There are stories of Muslims helping Christians and Christians helping Muslims. There are political figures, religious leaders and other prophetic voices calling for a measured response, an end to martial law, and the negotiations of a peaceful solution.