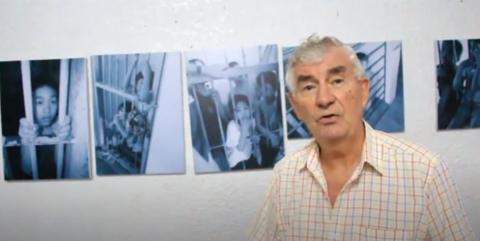 Many thousands [of children in the Philippines] are imprisoned without any evidence against them and without being charged. Many are jailed for non-serious offenses. The coronavirus puts them in grave danger of death, a painful and desperate death. They die gasping from slow suffocation, alone, abandoned, unaided, unknown, isolated and unreported as if they never existed.

The children are the most vulnerable as they are weak from malnutrition, racked by asthma, some with tuberculosis and damaged by physical and sexual abuse and hurt. They are jailed in subhuman conditions. Most sleep on concrete floors and in sub-human conditions. They are deprived of education, exercise, sunlight, fresh air, good food, medical help, legal help, entertainment, visitors, without showers and toilets. It is a desperate, dangerous situation. They must be freed at once.

I can reveal and prove that many of them are tortured. Here is a small fragment of the evidence of their torture in their own pictures. Visit www.preda.org/gallery/jailed children.

Raymond (not his real name), 13 years old, is now safe in the Preda home for rescued boys. He is a small boy, one of many, picked up on the streets by the tanods (local community guards) in Metro Manila and jailed in the so-called Bahay Pagasa (House of Hope). He, like others, ran away from an abusive, violent father. He lived on the streets begging. Like hundreds of street children, he had nowhere to hide and was jailed. Just imagine if your young boy was punished like this.

There are six images drawn on the page. In Raymond’s drawing, he shows the torture and abuse he suffered in the local government-run Bahay Pagasa. It reads like the torture that suspected terrorists were made to suffer.

On a single page are six images, the first a picture of flies on rotten food. They ate bad tasting, fly-infested expired food from cans. The cans were likely donated by companies. Then the centre’s budget for fresh food disappeared.

The second image is of Raymond forced to climb the steel bars of the cell and left to hang there for pain-filled hours, a cruel punishment. Sometimes, he was punched and whacked with a rubber slipper. Below that, to the left, Raymond is shown being beaten with a stick and spat upon as if he was dirt. To the centre right is a drawing of when he is sleeping. The older boys, some adults or the guards put toothpaste in his eyes causing painful stinging and beat him with a rubber slipper when he fights back.

In the upper right side of the drawing, Raymond shows how he was put in a steel drum and the others beat the sides of the drum to inflict severe noise, causing pain, hurting and damaging his eardrums. The bottom right side of the drawing is when he was forced to clean the filthy, clogged toilet bowl. He sometimes sleep on metal grills. The Bahay Pagasa is a regime of cruel torture and child abuse and it is common.

The Philippines system of law enforcement is very weak, arbitrary and in general there is much abuse of authority. This is the great hidden scandal of the local governments – the torture of children in the Bahay Pagasa. They need to be overhauled and made compliant with the guidelines issued by the Juvenile Justice and Welfare Council (JJWC).

There are many more child victims who have and are suffering like this. We must raise our voices in any way we can and demand that they be released without delay.

As Jesus of Nazareth said, to be his true follower we have to have commitment and action to help free the oppressed and the captives as he did (Luke 4:18). To be a member of God’s family, we will be asked when did we visit the prisoners and help them (Matthew 25:35)? Matthew exposed the torture and massacre of the children by King Herod (Matthew 3:16) and he wrote about how Jesus told his audience that the most important in the world are children.

Let’s us act now. Send this article to the Commission on Human Rights at chrcrc@yahoo.com and Secretary Eduardo Año of the Department of Interior and Local Government at emano@dilg.gov.ph. Ask him to act with the JJWC headed by the Secretary Rolando Bautista of the Department of Social Welfare and Development (DSWD). The DSWD is the “lead social protection agency” that is requesting the release of old and sick prisoners so they, too, must release all detained children in the different Bahay Pagasa. Then, they must act to close the Bahay Pagasa that are houses of torture and abuse and instead build genuine child development centers. Acting together, we can bring change.

Faith in action: Watch this video from the Preda foundation: https://bit.ly/Preda20.