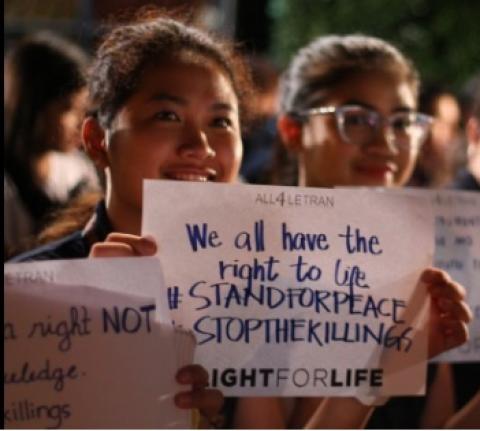 The following article reports on the response by Catholic religious leaders in the Philippines to the approximately 2,000 suspected drug dealers and users who have been killed by police and vigilantes since President Rodrigo Duterte took office in the Philippines on June 30. This article was published in the September-October 2016 issue of NewsNotes.

As Catholics around the world observed the World Day of Prayer for the Care of Creation on September 1, Catholic activists in the Philippines lit candles and offered prayers for the souls of the nearly two thousand Filipinos who have died in the past two months as newly-“war on drugs.”

With wide popular support for a clampdown on a rampant drug trade, President Duterte has used inflammatory rhetoric to encourage extrajudicial killings of drug users and dealers by vigilantes as well as police. Last month in a speech at a Manila slum, he encouraged citizens who knew any drug addicts to “go ahead and kill them yourself as getting their parents to do it would be too painful.”

As of the end of August, the National Police report 1,900 deaths associated with the anti-drug campaign since President Rodrigo Duterte came to power on June 30, over 700 of them suspected “drug pushers and users” killed by police and the rest by unknown vigilantes. One of the latest deaths was a 5-year-old kindergarten student, Danica May, shot along with her grandfather on August 25 by unidentified assailants.

"Pain and terror reign over families of those killed," said the "Stop the Killings Network,"a newly formed group of church activists and students who launched a #LightforLife campaign of candle-lighting and street vigils in Manila. Though it supports the campaign against illegal drugs, the Network issued a statement calling for an “end to the killings in the name of war on drugs. Justice and due process must be upheld. Human rights must by no means be violated.”

Other church and civic groups in the Philippines have begun to condemn the killings.

“We are alarmed at the silence of the government, groups, and majority of the people in the face of these killings…Is it fear that prevents people from speaking out? Whatever the reason, this problem, if it remains unchecked,leads to a culture of impunity.

“As religious and consecrated persons, we believe that the wheels of justice should take their course following the proper procedure and operate within the bounds of the law. “We demand that the concerned government agencies continue apprehending those involved in drug trafficking but avoiding extrajudicial killings, and pursue and apprehend vigilantes who carry out such illegal actions.”

Archbishop Socrates Villegas, president of the Philippine Bishops’ Conference, has asked parishes to put up “Thou Shall Not Kill" posters in communities and has called for a "Day of Prayer for Life" on September 14.

[Update September 5, 2016: President Rodrigo Duterte’s declared a “state of lawlessness” in the Philippines after a blast left at least 14 dead. According to the New York Times, the president's spokeperson, Ernesto Abella, said such a limited state of martial law will allow for the use of troops only to deal with security threats and to “suppress” violence. It is uncertain how this new state will affect basic freedoms.]

Human Rights Watch described the hundreds of killings in the government’s war on drugs as a "human rights calamity." "This is nothing less than an absolute human rights disaster," said Phelim Kine, deputy director for Asia, "The numbers are absolutely shocking.”