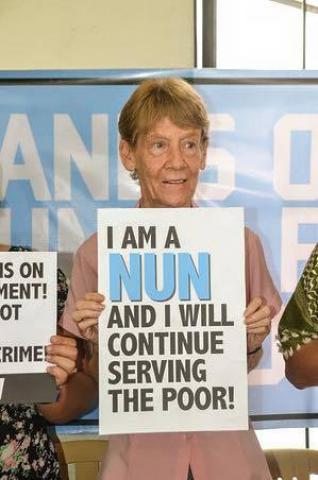 The following article was published by The Union of Catholic Asian News (UCAN) on April 25, 2018 and reprinted in the May-June 2018 issue of NewsNotes.

The Philippines' immigration bureau has revoked the missionary visa of Australian nun Patricia Fox over her alleged involvement in "partisan political activities."

A statement released by the bureau on April 25 said the 71-year-old nun, who was arrested on April 16 and detained overnight, had been ordered to leave the country.

"She was found to have engaged in activities not allowed under the terms and conditions of her visa," said Immigration Commissioner Jaime Morente.

The immigration official said the visa granted to Sister Fox gives her the "privilege to engage in missionary work and not in political activities."

A one-page immigration document dated April 23 ordered the forfeiture of the nun's missionary visa that was due to expire on Sept. 5. Sister Fox's alien certificate of registration is also "deactivated."

"We direct [Sister] Fox to leave the Philippines within 30 days from receipt of this order," read the immigration order.

Immigration spokeswoman Antonette Mangrobang, however, said the nun could still enter and leave the country as a tourist.

She also clarified that the decision to revoke the missionary visa was not part of any deportation proceedings.

"[The visa forfeiture] does not mean that she is blacklisted or deported.... The nun can still apply for another visa or re-enter the country using a tourist permit," Mangrobang told ucanews.com.

The nun, who is superior of the international Catholic congregation Sisters of Our Lady of Sion, said she was surprised by the bureau's decision.

"I thought the process was that I would have ten days to put in a counter-affidavit to answer the charges," she said in a statement.

She said she heard the news via the media because even her lawyer had still to receive a copy of the decision.

"I am very sad that the decision at present is that I leave the Philippines," said Sister Fox, who spent almost three decades of her life serving in poor communities.

She said her work with the poor seems to have brought her into conflict with the authorities.

"I am still hoping for a chance to explain how I see my mission as a religious sister and maybe the decision can be reconsidered," she said.

"I may lose my right to be in the Philippines but I can never lose the learnings and beautiful memories," she said.

The nun told ucanews.com that she and her lawyers are going to file a motion for reconsideration to challenge the immigration bureau's decision.

"I was not given a chance to answer the accusations against me," she said.

Among the evidence presented by authorities against the nun were pictures of her taken during a jail visit in the southern Philippines with a banner that reads "Stop Killing Farmers."

She also joined a recent fact-finding and solidarity mission that investigated alleged human rights abuses committed against farmers and tribal people in the southern Philippines.

In response to the visa revocation decision, church and human rights activists marched to the immigration bureau's main office in Manila on April 25 to protest what they described as "an act of religious persecution."

Good Shepherd Sister Elenita Belardo, national coordinator of the Rural Missionaries of the Philippines, said the Philippine government seems not to understand what it is to be a missionary.

"We are followers of Christ and the mission of Christ is our mission, that is to bring the Good News to the poor, free prisoners, defend the voiceless, and fight injustice," said Sister Belardo.

Father Benjamin Alforgue of the ecumenical group Promotion of Church Peoples' Response appealed to authorities to give Sister Fox a chance to defend herself and answer the charges against her.

"No revocation of her visa should take place before the bureau has heard the nun's explanation and presented her own side of the story," said the priest.

Bishop Deogracias Iniguez of the Ecumenical Bishops' Forum called on the faithful to press the government to reverse the immigration bureau's decision.

"It is high time for all Christians with a heart for the poor to come out and stand for what is just and right," said the prelate.

"All the good [Sister Fox] has done to help the underprivileged is glossed over and not even appreciated while the insecurity of the present government is given weight," he said.

Photo: Sister Patricia Fox, NDS, holding s a sign that reads "I am a nun and I will continue serving the poor!" during a press conference in Manila, Philippines. Photo shared on Facebook by Indigenous Women’s Network in the Philippines on April 28, 2018